Dravid Helped Our Cause

When a batsman of the calibre and quality of Dravid becomes the first casualty, the opponents see a window of opportunity. We didn't provide India a comeback chance. I am the most satisfied man on the planet... 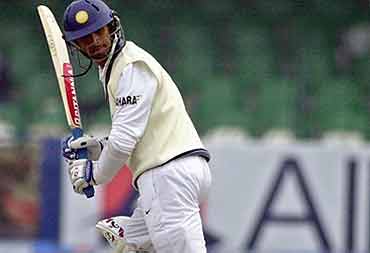 Even after defeating India, I still have the highest respect for them as opponents. They played tough cricket and tried as hard as they could but the fact of the matter is that they could not handle the pressure as well as we did.

However, I would certainly say here that Rahul Dravid's decision to open the innings in the series did help our cause. Dravid is an excellent one-down batsman, probably the best in the world. But there is always a difference between an opener and a one-down batsman, no matter even if the No. 3 batsman has to be at the crease on the second ball of the innings.

The mindset and the approach of an opener and No. 3 batsman is absolutely different and I can say this with conviction because I have batted on both the positions, at least in one-dayers if not the Tests.

Dravid managed to give his best in Lahore and Faisalabad probably because the conditions were comparatively easier. But when the conditions and match situation changed in Karachi, he struggled and in both the innings and became the first batsman to be dismissed.

When a batsman of the calibre and quality of Dravid becomes the first casualty, the opponents see a window of opportunity and if the opponents are as opportunists and shrewd [his choice of words - Ed] as Pakistan, then they would hardly provide India a comeback chance, which we didn't give.

It would not be an exaggeration if I say I am the most satisfied man on the planet at the moment. It is a dream of any Pakistan captain to win a series against India and doing it so convincingly, makes me even more happier.

I am particularly pleased with the improvement we have made since we lost to India at home in 2004. Then, we were an inexperienced team and captaincy was also new to me. But now, we are a more experienced side and know how to handle the pressure.

To me, handling the pressure and performing in pressure situations has been the decisive factor in the series that was decided in Karachi after two high scoring draws at Lahore and Faisalabad.

In 2004, we were in a rebuilding phase after the disastrous 2003 World Cup campaign and the batsmen, in particular, did not know where they would bat or what was their role. For example, in the one-dayers we were playing Shahid Afridi on top of the order but we didn't consider him for the Tests. But now, Shahid is an integral component of our side in both the forms of the game and he knows he has to bat in the middle, what is expected of him and how he would live up to those expectations.

Moreover, even after playing on batsmen-friendly pitches at Lahore and Faisalabad, our batsmen were quick to adjust to the seamer-friendly wicket at Karachi when we posted 599 after being skittled out for 245 in the first innings and that too after we had slumped to 0-3 and then 39-6.

Cricket is all about learning quick and fast, and we have proved to be better learners.

Furthermore, we can no more be branded as a one-man team -- a tag that is against most of the teams. We won the Bangalore Test without Shoaib Akhtar, Lahore Test (against England) without Younis Khan and Karachi Test without me. It's all out self-belief and self-confidence, and at the moment we are rich in that. Of course, winning and that too against top teams has helped us a lot.

I can say it for certain that when we arrived in Karachi for the third Test, there was tremendous pressure on us for two simple reasons -- firstly, the first two Tests had ended in draws and we did not know what would happen in the third, and secondly, we were being accused of adopting negative tactics by preparing batting tracks.

I want to put the record straight here. We always wanted hard and bouncy wickets because we had the confidence that our bowling attack was more penetrative and aggressive compared to India. That is besides the point that weather did not allow the groundsmen to come up with the wickets we were hoping for.

To me, the find of the series has undoubtedly been young Mohammad Asif. The lanky bowler kept coming up with something new and the Indian batsmen had no clue what to expect next. I don't believe that the technique of the Indian batsmen was faulty.

The simple fact is that Asif comprehensively beat them with his swing and pace. Needless to say that the combination of controlled swing and pace is always difficult to handle for any batsman, no matter how great he may be. I think Indian batting capitulated against some very aggressive and hostile bowling for which credit must be given to Asif instead of blaming and questioning the abilities and techniques of the batsmen.

Looking back at the series, I am disappointed that the first two Tests did not produce results. But at the end of the day, the better team that played better cricket on that given day won.