'Doors Have Not Been Closed'

But Pant is tight-lipped about amnesty and Hurriyat 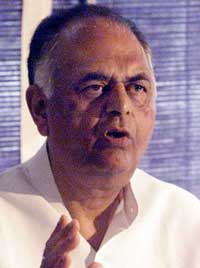 In a veiled attack on Hurriyat conference, the centre's interlocutor on Kashmir K.C. Pant has said that all those groups who shied away from parleys, will have to answer the people of Jammu and Kashmir about their "obstructionist attitude" in the peace process.

"In this situation if any group does not want to assist in the peace process, it will have to answer to the people of the state as to whether it is not being obstructionist in the way of this peace process," Pant told PTI on completion of his maiden visit to the state after he was appointed as the interlocutor on April 5.

Stating that his mission to the state was to facilitate the evolution of an agreed solution to the Kashmir problem, Pant said "you see whether Hurriyat want to respond to my invitation or not is a matter for them to decide. I have not come to score meeting points. My purpose is far more serious. This is an effort to begin a political dialogue which would help in restoration of peace in the state."

Pant would be soon meeting prime minister Vajpayee to apprise him of the outcome of his visit to the state and the talks he held with various groups.

Some of the groups including the state unit of communist party of India had suggested that a general amnesty should be announced for Kashmiri militants, who want to shun violence.

"I will have to analyse all the suggestions that have been made to me and then discuss it with the concerned people in the government," he said.

Pant did not offer any reply to a question whether the issue of granting amnesty would be considered soon and said "I do not want to comment on individual suggestions made by certain groups."

Terming his visit as "fruitful and useful one", Pant said "it has been a useful visit. It has been for me a necessary visit because I came to understand very much the difficulties and concern as well the perception and aspirations of people living in different parts of the state.

Pant also said " have met a very large number of groups and individuals and have benefitted from this interaction. I think it is a process which needs to be continued and I propose to continue it.

"It is my distinct impression that there is a very strong urge for peace in Kashmir valley as well as other parts of the state," he said.

He said this urge for peace amongst the people was today creating conditions in which persons from various schools of thoughts, different views had come forward and "frankly put their views before me."

Asked whether the government was intending to hold talks with Kashmir militant groups like Hizbul Mujahideen, Pant said "the centre has made it clear that doors have not been closed for talks with Kashmiri militants who are desirous of peace and that holds even now."