India would count out Sri Lanka at its own peril. It would be a mistake if they treat these Tests as a warm-up for the battles against Pakistan and England. 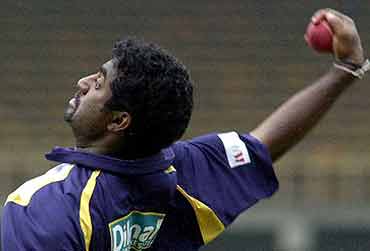 The Sri Lankans can regroup and Chennai can provide the proof even if the match itself is not slated to go the distance. We in Sri Lanka know the fury of weather enough to submit to its wishes. It can be a good pointer for the two Tests that remain.

It still would be disappointing as India and Sri Lanka do not often play Tests. It is difficult to account for such bad vibes for there is enough talent and likeness to promise intriguing contests. How do you otherwise account for a split one-day and Tests itinerary?

The Sri Lankans were deported for 10 days and South Africa were ushered in as the Indian Board sought to maximize its commercial and election prospects. I have already voiced my dissent at the unfashionable one-day centres the Sri Lankans were saddled with. I now hear that Kanpur as a Test venue for the present series is in doubt. And to think of all this happening even as the Chennai Test is set to unfold within a few hours.

No wonder there is little build-up for the series. Sri Lankans themselves must share the blame for the way they rolled over in the one-dayers. However, try telling this to the two teams who are itching either to redeem lost reputations or build new ones.

Chaminda Vaas and Muttiah Muralitharan are two such seniors from the Sri Lankan side. Both will be handful in the Tests and my reasons are simple -- one-dayers usually provide flat pitches and defensive fields which would not be an issue in the Tests.

Besides, Murali can bowl 30 and not only 10 overs in a day which backed by aggressive fields can be daunting for batsmen. But for Sachin Tendulkar and Rahul Dravid, also Saurav Ganguly if he plays, not many have faced him in Tests. I wonder if V.V.S. Laxman has ever faced Murali in whites. Dilhara Fernando will be a good back-up for the Vaas-Murali foil.

The Indians too would follow the return of Anil Kumble and Ajit Agarkar with interest. Kumble has always been a probing bowler though personally, I never had too much of an issue with spinners. That he is now aiming 500 wickets in Tests is a tribute to his longevity and fitness, not the least to how he has reoriented himself in the past couple of years.

Agarkar too has been a story of perseverance. I always viewed him as a once-in-20 games bowler. He too has rediscovered himself and India now has a bowling combination of two spinners and Agarkar and Irfan Pathan who fit in snugly.

A few youngsters too have a window of opportunity. We would watch the advent of M S Dhoni in the Tests with interest and along with Pathan he gives the Indian batting that extra depth. I wonder if the presence of the two can embolden the Indians to try out five bowlers.

I don't know whether the Indians would review the situation following the inclusion of Ganguly but they have experimented enough in recent weeks to suggest they can do the unthinkable.

The Indians would surely look to shape their Test squad for the battles ahead. They have important engagements against Pakistan and England in the next few months and would be keen to check out on a few individuals.

Yuvraj Singh can no longer be held back and seems ready. The same is with Mohammad Kaif. It must put the likes of Gautam Gambhir and Laxman on alert. Ganguly too seems to be hanging only by the thread.

Now that the Sri Lankans have left Sanath Jayasuriya back at home, it is imperative that the four batting mainstays of Marvan Atapattu, Mahela Jayawardene, Kumara Sangakkara and Tillakaratne Dilshan share the batting load and guide the youngsters. In sub-continental conditions, the toss is as important as the need to bat big and long in the first innings.

Hopefully, the weather in Chennai would relent for a few answers to emerge. However, I must stress that India would count out Sri Lanka at its own peril. It would be a mistake if they treat these Tests as warm-up for the battles against Pakistan and England.

Atapattu's men would be on a mission to salvage their battered honour and as we have seen, two weeks in cricket can be a long time. If the Indians can keep up the momentum, they would be the side to watch for the rest of the season.