Dissent At The Oscars

Was it a war-marred Oscars? Not as much as Michael Moore, Pedro Almodovar and others would have wanted... 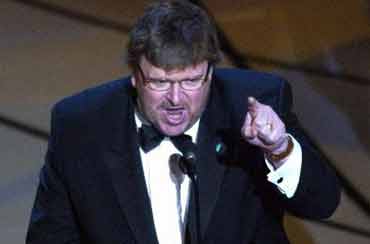 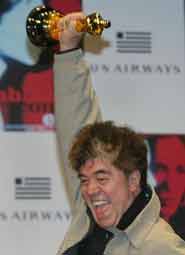 To be precise, Oscar himself said nothing whilst the host of the 75th Academy of Motion Picture Arts and Sciences awards tried to keep anti-war protest under wraps. Oscar remained typically impassive as Steve Martin's comic ad-libs failed to shake off the intervention of Michael Moore, Pedro Almodovar and a handful of others. Almodovar called on "all the people to raise their voices in favour of peace". The cheers were not universal but the balance tipped heavily towards applause.

The same was true before the ceremony where, outside the entrance to the Kodak Theatre, those opposing the war outweighed those in favour by several hundred. Susan Sarandon and Tim Robbins, both having taken expressly anti-war positions, were cheered as they arrived and gave peace signs to the crowd. Shortly afterwards, one of the Hobbits from the ironically titled "Lord of the Rings - the Two Towers" took a placard from the crowd and carried it proudly past the waiting cameras.

The worldwide anti-war movement, with its unprecedented demonstrations and explicit condemnation of US government, was infecting the most American of all events. So much so that when Adrien Brodie picked up the best actor award for his role in holocaust drama "The Pianist" and talked about "the sadness and dehumanisation of people in times of war" he got a standing ovation. 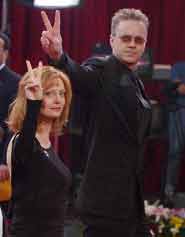 Bruce Davis, an executive director of the Academy said in 1999: "The press like to write about the Academy Awards at this time of year, and in the absence of any legitimate controversy, they will find one they can deal with". He was talking about the lifetime achievement gong for Elia Kazan - a talented director, brazenly unapologetic about destroying the careers and lives of his equally talented friends, colleagues and former comrades during the McCarthy witch-hunts. There was talk of protest during the ceremony that year too. Some, but only some of the Hollywood showcase stayed in their seats. Notable liberals, like Warren Beatty, felt compelled to abandon previously stated principles. Attempts to give Kazan awards previously had met more serious opposition. Arch-right winger Charlton Heston was even forced to resign from the American Film Institute board in 1989 for supporting Kazan's claim to a trophy.

How that must make Michael Moore smile now. His wide-ranging, politically charged documentary "Bowling for Columbine" (the town where two teenagers went on a shooting spree in their own school) features Moore taking on Heston in his own home. Heston remains president of the national rifle association and Moore succeeding in linking this organisation to the teenager's actions, as well as to the international arms trade. It was for this internationally acclaimed documentary that Moore won his Oscar and his chance to speak to the world against the war. History will, therefore, have to recognise that this year's global glitz gala came close to a platform for protest. There was, Mr Davis, a real controversy for the press to report.

The Academy had done everything it could to the stop politicisation of their shindig. They shrunk the red carpet outside the Kodak doors. This was apparently designed to create a more sombre tone, appropriate to wartime award giving. What it also succeeded in doing was limiting the number of TV crews and their access time to arriving nominees. Inside the gala speeches were reduced to forty-five seconds apparently in order to keep the ceremony on time but simultaneously cutting space for political speeches.

When the ceremony actually began, anyone with a stopwatch could see this rule enforced, at best, unevenly. Chris Cooper, widely perceived as one of Hollywood's unassuming personalities was given around fifty seconds, whilst the two either side of him were given thirty. A mistake for the censors - Cooper finished his speech by calling for "peace to us all", the first such statement of the evening. From then on speeches were cut short by the disappearance of the microphone into a hole in the stage and the blearing out of loud elevator music. Michael Moore, Susan Sarandon and others the Academy knew to be anti-war were taken aside and warned not to step out of line. Censorship is definitely the right word!

On UK television we were treated to the sight of Linda Blair (of The Exorcist fame) saying how important it was to remember this was a night of "enjoyment" which should not be "bombarded" with politics. A poor choice of words, considering the very real aerial bombardment that was killing civilians in Baghdad that very moment. This carnage and destruction could be witnessed instantaneously and in real time with the flick of a button, such is the union of twenty-first century warfare and technology. So we had LIVE FROM THE OSCARS on one channel and LIVE FROM THE WAR ON SADDAM on the next.

What legitimacy is there in a televised event, in a country prosecuting a war, which does not at least acknowledge that the war is taking place? To do this would be an attempt to suggest that art and popular culture, in which category mass-audience movies also sit, are divorced from reality. So why give an award to "Bowling For Columbine", a commentary on the very real politics behind the sale and use of arms in the US? 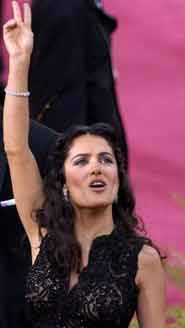 Herein lies the central contradiction of the 75th Oscars, indeed of that Kazan debate from 1999. We're just about the craft of film, the Academy claims, but movie craftspeople have a habit of making political statements. In the case of Moore it's documentary as statement. In the case of another nominee, Salma Hayek, the statement was presented in the life of Latin American revolutionary and artist Frida Kahlo.

In the multi-Oscar winner "The Pianist" director Roman Polanski and his left-leaning leading actor Adrien Brodie have made a powerful statement about war, fascism, human creativity and human survival. They won best actor, best film and best director gongs at the ceremony.

Moore, Almodovar and others who refused to be silenced by the censors have dealt a double blow to the Academy. Primarily and most immediately important, they have used the Oscar's global coverage to challenge the unfolding movie of the Gulf War on other channels. At the same time they have demonstrated that the film industry is ripe with meaning and substance. It's not all shimmering frocks and big pay packets. It's also about ideas.

The Oscars is an occasion usually reserved for self-congratulating millionaires thanking everyone who made them great. The famous red carpet entrance has, over the years, become the setting for rampant individualism and competition. Who is wearing the best dress? Which up-and-coming is dating which executive? Who's in the ten-mill bracket this year? Who will win that gold icon, join the "in" crowd and add another zero to their next pay packet? Which post-bash party will be the most exorbitant?

On the one hand this frothy pre-ceremony catwalk preserves the highly ideological notion that something called talent brings you happiness, power, good looks and fame. This is a notion that the lives of the immensely talented Frida Kahlo, and her confident Diego Riviera, disprove. The world of Nelson Rockerfeller didn't run on talent and neither does that of George Bush; it runs on the fuel of profit. Which is the second meaning the red carpet reinforces. "He who has the gold makes the rules" as the father of blaxploitation movies, Melvin van Peebles, said about his own filmmaking troubles in the 1990s.

The reduction of the red carpet this year was about preserving the balance between these two meanings and much less about the etiquette of wartime award ceremonies. It was a gesture to say: "we care," and then get on with the real business. If respect for the dead and dying was so essential, why script Steve Martin's opening speech to repeat the words of Academy executives - "it's business as usual". Maybe Martin meant it ironically but as the show proceeded in its usual triumphalist style, all the irony was lost. In every respect except the carpet it really was business as usual.

Before each Oscars event, the major Hollywood corporations enter what is appropriately called a "campaign". They rent LA media and street advertising months in advance. They wine and dine Academy members, often offering much more than basic hospitality. They push their flagship nominated film in whatever way they can. It's a blitzkrieg of the media kind, in which one gold-heavy company slugs it out with another. All of this took place, as usual, this year.

Nicole Kidman still turned up to the long-planned and relentless interviews/photo-shoots during the previous week. Don't be fooled either by the idea that an independent company gets a look in. For example, Disney has owned Miramax -who made a number of this years Oscar competitors - for years. It's true that the limelight doesn't fall too heavily on corporations during the ceremony. However, the façade of merely celebrating craft and art is broken by the necessary thanks given to someone the statuette winner barely knows at Fox or Disney. This someone may well have the financial and decision making muscle to "green-light" the winner's next project. Once again Kidman is a barometer, she thanked no fewer than six executives, once she got over her tears.

This is an evening loved as much by the executives as the Hollywood glitterati. Price Waterhouse-Cooper, who dramatically arrived at this year's affair with the winners names in a briefcase handcuffed to a body guard, estimate that an Oscar win can net a film an extra $30million at the box office. This might be a good point to remind us of our sponsors at Oscars 75, all of them major US corporations.

If it was business as usual in financial terms then it was also business as usual for the "art ain't political" camp. Hilary Swank, Ben Afflek and Dustin Hoffman (who on other days is explicitly anti-war) read their scripts diligently, telling us that in times of trouble movies matter most. Kidman bleated that "art is important - It's what believe in." The Oscars is a night when the old psychobabble about movies being dreams in celluloid, pure entertainment, is repeated over and over.

The best response to this nonsensical idea came from the Spanish actor introducing the signature song from "Frida". He quoted the painter herself, when she commented that she didn't paint he dreams, she painted her reality. Death and war were real he continued. They should not be ignored at this ceremony, these artists had a duty to show what was real and to act like Frida would have - to stop the war. Put so eloquently and forcefully, from the perspective of a creative mind, the Oscar's 75 audience were happy to applaud.

They were not so generous with Michael Moore's harder line. He chose to question the legitimacy of Bush's presidency and to use words like "carnage" and "killing". "We are against the war Mr Bush…shame on you, shame on you, shame on you." In London it was hard to tell but it sounded 60-40 to the anti-war lobby as the microphone disappeared in front of him. After Moore left the stage Martin joked that he was being "escorted into the boot of a car". The laughter, like the whole evening formed an uneasy balance. This seemed to sum things up: the usually comfortable Oscar's relationship between business, art and politics had been seriously unsettled.

The late critic Pauline Kael once said that the whole point of watching a film was that you didn't go to sleep, that you were an active viewer. She reminded us that "Citizen Kane" was the best movie ever made precisely because we had to think whilst watching it. Censorship reduces the viewer's potential to think for themselves. At this years Oscar's Moore, Almodovar and others reduced the reduction and succeeded in keeping the world, or at least part of it, awake.