There may not be enough MPs in Parliament to support it, but halfway across the world, the Indian American community watches with dismay and frustration as the Left and BJP attempt to scuttle the nuke deal with the United States. 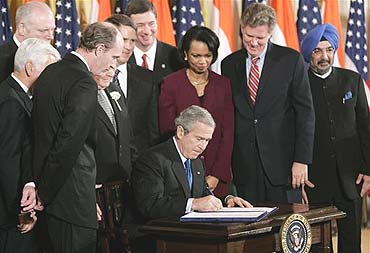 Sitting halfway across the world, the Indian American community is watching with dismay and frustration as the Left and Bharatiya Janata Party in India attempt to scuttle a civilian nuclear agreement with the United States.

On July 18, 2005, President George W. Bush and Prime Minister Manmohan Singh had signed the deal, which overturns three decades of U.S. policy by providing India with nuclear supplies. Since then, members of the nearly 2-million strong community had come together to persuade their lawmakers in Congress to support the agreement. Prominent professionals put their careers on hold and dug deep into their own pockets to travel to Washington and meet lawmakers. Ads were placed in newspapers enumerating the virtues of the deal; and PR packages were produced explaining its finer points.

Swadesh Chatterjee, North Carolina-based chairman of the U.S.-India Friendship Council, played a significant role in winning congressional support. He says while members of Congress have adopted a wait-and-watch attitude toward the debate in India, it is the Indian American community which is anxious about the future of the deal.

Mr. Chatterjee, who was awarded a Padma Bhushan for his work toward fostering better U.S.-India ties, is worried that the "dirty politics" in India may cause a "tremendous setback" to the relationship.  "India's credibility would be shattered" if this deal does not go through, he cautions.

Ashok Mago, Texas-based chairman of the U.S.-India Forum, admits he is "disappointed" at the events taking place in India. "It seems like politics as usual. Parties opposing it are placing their political interest over national interest," he says. Mr. Mago helped ensure the support of members of Congress from Texas for the nuclear deal, which was overwhelmingly approved by Congress late last year.

"Everyone knew the terms of the Hyde Act," he points out, referring to the enabling legislation signed into law by Mr. Bush in December 2006. "Then why did the parties opposing it wait this long to oppose it so strongly and now want to kill it?" he asks. If the deal fails, Mr. Mago says, it would be "a great disappointment to the Indian-American community, which has worked very hard to get it approved in the Congress."

"This administration has worked very hard, along with those who want to see India become an economic power, to get congressional approval and killing this agreement will send a signal not only to this administration but to future administrations too that the government of India cannot be counted on to get support of agreements that it accepts in the Parliament," he adds.

In Massachusetts, Ramesh Kapur, president of the Indian American Security Leadership Council, helped win over his share of lawmakers. He notes that the debate in India is "politics as usual" but adds, "I didn't know politics in India was this dirty."

Mr. Mago hopes political leaders in New Delhi "will put their differences aside and remember the importance of much-needed clean energy for continued growth of the Indian economy and better future for people of India."

Kanwal Rekhi, California-based managing partner of Inventus Capital Partners, on the other hand, welcomes the debate in India. "All these concerns have to be aired now," he says, adding, "It is best we have everyone on board for this deal."  Mr. Rekhi notes that the opposition in India may help silence critics of the deal in the U.S. who feel "India is gloating over having had its way" with the deal. "People here can now see that there is also a lot of opposition to this deal in India and get a better sense of what the prime minister is up against."

Sanjay Puri, of the U.S.-India Political Action Committee, says he was disappointed by the delaying tactics, but adds that such debate is an essential part of a democracy. He underscores the fact that time is running out for the Bush administration and that members of Congress will become increasingly focused on the elections as 2008 gets underway.

Mr. Chatterjee says the deal would be in jeopardy if the U.S. Congress doesn't vote on it by December 31. If it goes into next year, past February or March, it will enter the "Red Zone," he predicts. He notes that the deal has been debated and discussed in public since it was signed in 2005. "The Hyde Act was signed in December [2006]. Why are they now asking for a panel to address their concerns?" he asks.

"Why didn't they think of this before?" he adds, then answers his own question: "They didn't think it would go through."