A day in the life of the writer, designer, editor, publisher, printer, and owner of a historical Urdu magazine, which in his own words is "financially unviable". 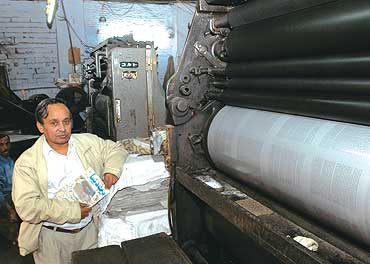 Dignity in the face of decline is a bravery few undertake. Consider a day in the life of 50-year-old Asif Fehmi, the writer, designer, editor, publisher, printer, and owner of Din Duniya, a historical Urdu magazine, which in his own words is "financially unviable".

Each morning Fehmi wakes up in his Noida Sector 41 bungalow, dresses up in a suit (tie included), drives to Jama Masjid, walks way through the Purani Dilli bylanes, and enters a haveli with a courtyard shaded by large neem trees. There, Fehmi struggles, along with 15 employees, to produce the next issue of Din Duniya.

"Not many read a dying language like Urdu," he says. Started as a weekly tabloid by Fehmi’s father in 1921, Din Duniya originally covered politics, films, and society gossip. Today, it is a monthly journal that covers Islamic matters. And Islamic matters alone.

"We write on Muslim history, Hadith, and current affairs with a minority perspective," says Fehmi. Such limited specialization has yielded a limited readership—around 4,000 subscribers. There are hardly any photographs and no advertisements. But the job has to be done.

From a garage-like room off the courtyard comes the whining of two printing machines, while Fehmi sits in an adjoining hall. Possessed by dogged dedication (call it a gentle madness), he busily writes editorials, checks proof copies, gulps down chai, and edits stories.

Alas, all this passion produces no material wealth. The indulgence is subsidized by Khawaja Press, which Fehmi runs with the same two machines and which occasionally gets orders from Delhi and Kashmir Universities. "What will happen to Din Duniya after you?" I ask Fehmi. "I really don’t know," he says.