There's really no end to discovering cities, or cats, both smug in their infinite complexity, both sublimely aware that you need them more than they need you. 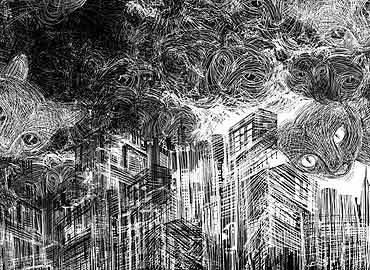 In A Dream of a Thousand Cats, Neil Gaiman wrote that cats ruled the worlds before humans did, and could dream themselves back into power—if only a thousand cats could dream of the same world at the same time. Cats being cats, this is unlikely to happen soon, but it is commonly known that cats live in a parallel dimension. They see more than we do, their goals are distinct from ours, and possibly more evolved.

Cities, too, have souls; they’re complex organisms of steel and concrete and plastic and blood. As they grow and mutate, their essence leaks into their denizens—humans are excellent indicators of their cities’ evolution, but to really understand the soul of a city, look to that most sophisticated of sentient urban life-forms—the not-so-humble domestic cat.

In Calcutta, I was owned by a cat named Ao. Ao was a gentle rice-eater, slothful, beautiful and utterly loveable. Summers she spent in the garden, casting coquettish looks at bumbling, earnest neighbourhood toms. Winters she was found curled up on blankets and voltage stabilisers, purring Rabindrasangeet and only stirring a muscle when offered fish.

I was recently acquired by a kitten in Delhi. A tiny, helpless, grey-black striped bundle who won my heart completely by chewing on my finger within a minute of getting to know me. Since then, she’s driven me mad. Now two months old, Sherpa (climber of all, daughter of tiger, biter of foot) is cocky, brash, violent and greedy. She’s noisy, dirty and unfazed by cold water, yells or dogs. My entire flat, myself included, has been chewed to bits. My guests have been assaulted, my newspaper articles defecated on, and my flatmate’s family-creating potential possibly destroyed. And yet Sherpa remains the most adorable kitten I’ve ever seen—she’s graceful, bright-eyed, wild and utterly lovely, and now I can’t imagine what life would be like without her. As I write this, she’s toying with the remote, changing channels and waiting for the opportune moment to leap on my keyboard.

What would she type, if I let her? I’m Delhi, she would say. Deal with it.

It’s not much of a theory, as theories go, but there’s something to it. The only Bombay cat I know is pure Bollywood. He’s called Mithun and is the essence of all things disco—he’s glamorous, promiscuous and clearly has underworld connections. There’s really no end to discovering cities, or cats, both smug in their infinite complexity, both sublimely aware that you need them more than they need you. If you’re thinking of changing cities, visit in advance and spend a few days observing cats—they might tell you everything you need to know.