Despite Plans And Prior Warnings, Why Is Mumbai Getting Flooded Year After Year?

Bombay needs a cohesive plan to avoid another such situation 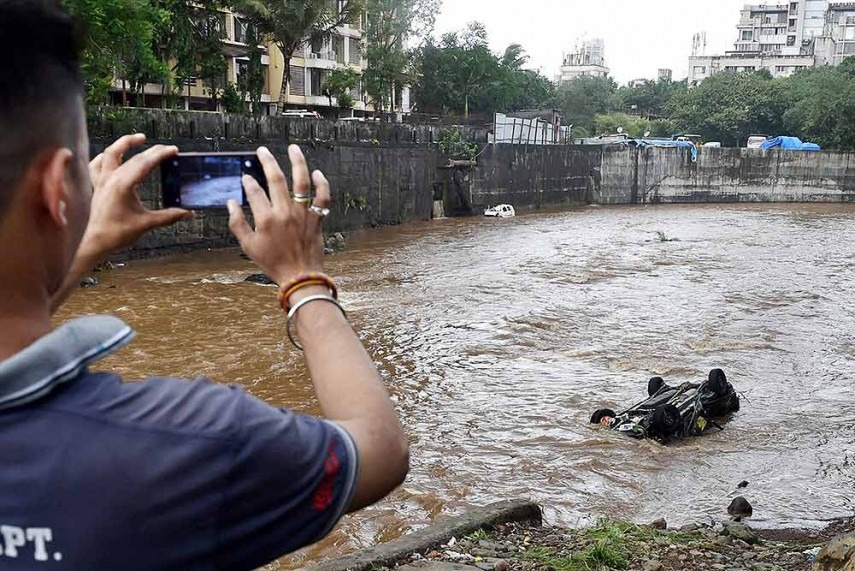 Hindsight is a great sight but what if that hindsight or those lessons from the past, come and go every few years like the rough, muddy, filthy but fierce waves during high tide in Mumbai’s monsoon and throw out all the garbage that the city religiously dumps all year through? Year after year...

More than 50 lives were lost in less than 48 hours even as the city was lashed with 331 mm rains on August 29 during which people were washed away, a dilapidated unsafe building collapsed and two men disappeared and died in manholes, left open with no warning, presumably by the country’s richest civic body.

The postmortem of how the weather bureau, railways, civic body, state government responded to the heaviest rainfall since the deluge of 26th July 2005, is underway at the Bombay High Court and on various political platforms. However, the citizens and experts remain in disbelief over how the city faces this year after year and some more.

A Public Interest Litigation in the Bombay High court seeks answers from the civic body over Dr Deepak Amrapurkar’s tragic death as he was gulped by an open manhole not far from his house in Prabhadevi.

“This is like a Déjà vu. Once again we are discussing about requirement of sophisticated equipment and disaster management. Once again we are talking about what if the eight pumping stations, that were commissioned years ago, were functional. The High Court will again pass strictures. And the best response from the chief minister, who holds the urban development portfolio, was declaring a holiday on the following day. Problem lies in the fact the bureaucracy and the politicians are only firefighting with no long term plan,” says Nitai Mehta, founder of Praja Foundation, an NGO that works on civic issues.

Thousands of people witnessed this fire fighting first hand, even as they set out to work despite heavy rains that had continued from the previous night and as they watched water rise up in railway tracks and every low lying area by afternoon. One among them was Gargi Tripathi, actor who left from her shoot early from Mira Road, a far western suburb, to reach home in Chembur, a central Mumbai location.

“I left early around 3.30 pm because of heavy rains and rushed to Mira road station, the nearest station from my sets. The trains that were running upto Andheri had stopped by the time I reached ticket window. Like so many other people, I started walking and got confused about which road to take since it was all new for me. One auto rickshaw dropped me near Thakur mall which is near Mira road toll naka. I took another rickshaw thinking that I will be traveling on main road so there won't be any problem except for some delays. But I was wrong it took me one and half hour to reach toll naka and there I saw flooded road. It was knee deep water and my rickshaw stopped. I also started walking and was totally confused because reaching Chembur was impossible and my phone was soaked in water. My son contacted his few friends in Mira road and Goregaon and gave my number, but they were also unable to call me. His one friend sent her address though whatsapp but Oberoi mall was far far away for me I got one auto rickshaw which dropped me near Dahisar bridge and there I saw some people shouting as two teenagers were washed away in water. I really became nervous as I didn't know how to swim and water was knee deep. At that time one private car gave me lift till the over bridge near Oberoi mall. I again started walking in water and looking for the address I was in tears as it was getting dark and I was totally exhausted and it continued to rain.

Around 7.30 almost after four hours later I reached that friend’s house, fully drenched in muddy waters. Only if I had known earlier, I would have just stayed back on the sets and stayed safe.”

This was roughly the template of every stranded person that day – the difference was in the location – ranging from Sion, Kurla, Thane, Parel, Dadar – and the hours one spent trying to get to a safe place, many reached their homes only the next day. By late afternoon more and more people poured out on the roads even as high tide made sure that the water did not recede soon enough. Helpless and inevitably resilient Mumbaikars finally counted on each other yet again and provided support wherever they could.

“The problem is that we are used to such breakdowns all the time and are constantly pushing ourselves – be it over-crowded trains or over-flowing garbage or waterlogging – so one doesn’t really know when it is risky and when to stay back,” says one commuter from the suburbs.

The question is of all that happened what could have been avoided or handled better?

“Nature is a great teacher. But we don’t learn the lessons. I have seen three major floods, one in 1985, then 2005 and now. After the first flood itself, a plan was developed. BRIMSTOWAD has been in the making since 1993. Many years ago a holding pond was proposed to be built in Mahim. It is a structure that can hold large quantity of water for a few hours till the high tide subsides. This has been done in Navi Mumbai and that is the reason it will not flood there. The approvals were taken several years ago,” says Dr SL Dhingra, IIT professor and an expert on civil engineering and transportation systems.

“No doubt that if it was communicated to people the problem could have been controlled, even if it could not have been avoided. The drainage capacity has not been augmented – though recommended augmentation has been 30 to 40% all those years ago - but the point is even if all eight pumping stations were operational it may not suffice because of the densification of population over the years. One of the highest in the world at 2667/hectare, that is the elephant in the room and unless that is addressed Mumbai will face this every year. We missed the bus when we lost mill lands to rampant real estate construction instead of the original plan for open spaces, low cost housing and private constructions,” says Milind Mhaske of Praja.

BMC Commissioner Ajoy Mehta, Sena chief Uddhav Thackeray addressed a press conference to explain the failure and how the civic body did its best. Aaditya Thackeray, chief of Yuva Sena wrote a column for NDTV clarifying his position on the mess, calling for a ban on plastic, “Contrary to the claims of the blame game, 91 kms out of the 114km proposed work for the BRIMSTOWAD project have been completed. This project encompasses the widening and deepening of rivers and nullahs, having retaining walls for the same. Such work has been a major contributing factor to prevent the Mithi river from overflowing (as it did in 2005) even though it reached dangerous levels.

Post-2005, a disaster management control room, which is unarguably one of the most equipped in the country, was set up for the city and suburbs, having a coordination centre for all nodal and ancillary services, including the navy and the coast guard and 5,000 CCTVs that give live feeds. The staffers were coordinated, firemen and rescue ops moved in sync with issues relayed from the control room.

This control room prevented the panic and disarray that ensues in civic operations in such events.

Most importantly, within hours of the fury of the rain and wind subsiding, the water from our streets was out and the streets were normal. This time, unlike 2005, the water was out as soon as the rains subsided. What lasted long was a halt in transportation as the Railways couldn't resume full-scale services until the next evening. Additionally, 70 municipal schools across the city were opened up and more than 5,000 people took shelter overnight.”

Except that on July 26th 2005 it had rained three times more than on August 29th2017 and the warning to not to venture out came far too late according all the stakeholders that Outlook spoke to.

According to the white paper (prepared from information by the Civic body through RTI) published by Praja, more than 50% of complaints (42001) filed in 2016 by the citizens about various civic issues (81555), top three remain about roads, buildings and drainage. Only 58% of the total complaints were closed.

However, picture this. Replacement of a manhole took 21 days when the citizen’s charter recommends action in 1 day. A choked drainage complaint took 11 days and over-flowing manholes take 20 days for the problem to be solved.

Urban planners and activists list out several such factors including the disaster management plan, cleaning and dredging of nullahs, Mithi river, better response from the railways and most importantly communication between different agencies that are responsible for the city. Not to mention the dilapidated buildings in which hapless people continue to live for they have no viable option. And that issue comes under yet another department.

Milind Deora, former MP from South Mumbai, underlines the lack of coordination. “The real issue is who represents this city. Regardless of party politics, too many agencies (such as the BMC, departments of state government, fire, railways etc) are reporting to different bosses. Consequently, there is no cohesive plan, no one is in charge of the city in times of disasters. I have seen this in 2005, during terror attacks and now. Unless there is direct election for the Mayor’s post and he or she is empowered to take decisions, such collapse cannot be prevented. At the moment, no one is running the city.”

Mhaske says accountability and fixing of responsibility is crucial to making some headway in managing the mess that the city is in. “If any of these, the BMC commissioner or minister of urban development were a private job, that person would have lost the job.”

Instead more than 50 people lost their lives.

Several clean up drives will soon be organized by citizen’s groups to clean up the garbage thrown by the sea one more time as the last day of Ganesh festival concludes and the rains start to wind up slowly. Until next year.