Chief Minister accepted the defeat by saying that the party was able to give a tough fight to the Congress party. 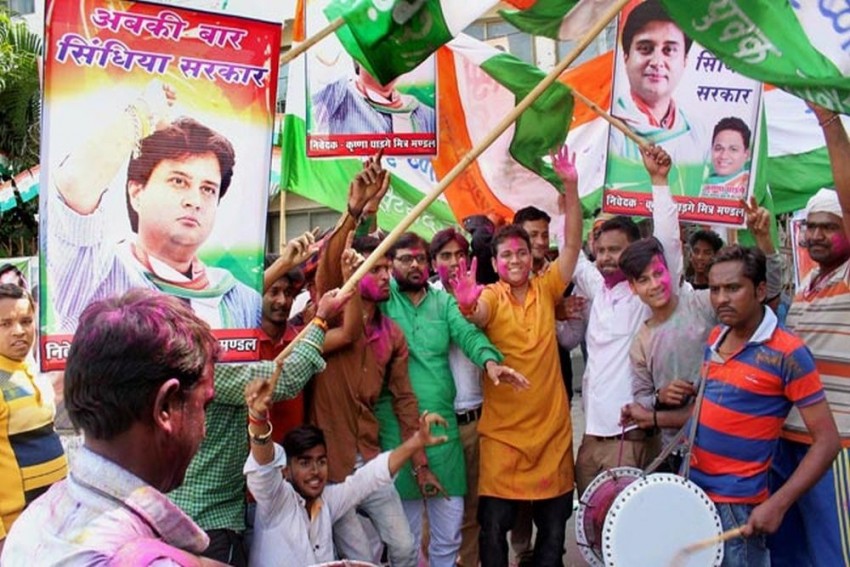 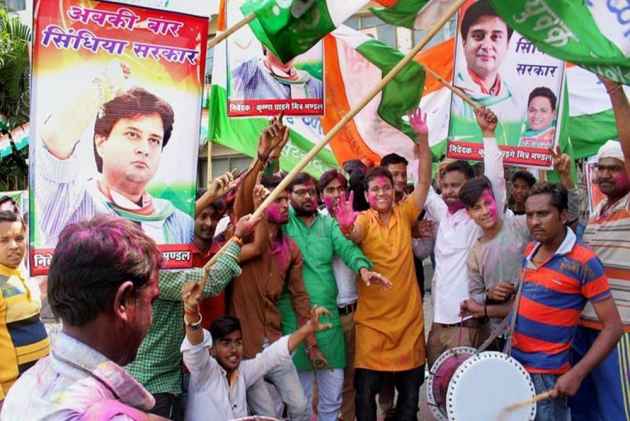 The opposition Congress party in Madhya Pradesh has been able to ward off a high-pitched BJP campaign and retained Mungaoli and Kolaras Assembly seats falling in Ashok Nagar and Guna districts of the State .

The contest for the by-poll in the two Assembly seats has become a prestige issue for three-time Madhya Pradesh Chief Minister Shivraj Singh Chouhan and Congress Member of Parliament and former Union Minister Jyotiraditya Scindia.

Chouhan is the poster boy of MP BJP and was positioning himself as a mass leader to defeat hope of Congress revival in the State in the upcoming Assembly elections.

Chief Minister accepted the defeat by saying that the party was able to give a tough fight to the Congress party.

"Both Kolaras and Mungaoli assembly seats were held by the Congress and even in 2013 BJP wave, the Congress had held the seats by over 20,000 votes. In the absence of the Bahujan Samaj Party which had pulled about 20,000 votes from these constituencies in 2013, our task had become much more difficult,” Chief Minister told media persons here today.

Not taking any chances, Scindia too decided to spent adequate time in the two assembly segments which are part of his Guna Lok Sabha constituency.

Today’s loss is the fourth consecutive defeat of ruling saffron party in the State in past one year. The party has lost Ater and Chitrakoot Assembly seats.

The outcome of the results have a far reaching conseuqneces in the politics of Madhya Pradesh where Assembly elections are scheduled to take place by the end of this year. The results would reflect the general mood of the voters in MP, where the party was thrown out of power in 2003.

The by-polls result serves an opportunity to young Congress leader Scindia who is pitching to project a chief ministerial candidate in MP.

"Neither the BJP projects a face in every state, nor does the Congress. But where you have faces you have to project such faces (leaders). My statement is not just confined to Madhya Pradesh. Politics is changing . Now, people want to know the face of the corporator. It is now a reality in our country. I believe there is a need for it (to announce CM candidate). You have faces …don’t you think so that we have faces in Madhya Pradesh," Scindia told Outlook while campaigning in Mungaoli in support of party candidate.

So how are the fortunes of BJP and Congress placed?

Outlook, in one of its recent cover stories had said that subtle yet significant changes in composition will affect MP, a BJP bastion for three terms.

As an electoral arena being primed for two bruising battles—one for the assembly later this year, and then the big one next summer—Madhya Pradesh surprisingly eludes easy definitions. It’s as if this heartland state is suspended between two realities. One is the statistical reality, which would seem to leave no room for suspense and pretty much makes of it an open-and-shut case. The other is the fluid political reality, changing even as you seek to describe it.

If past records determine the future, it might as well be a walkover. The BJP is in pole position here—it has been ­ruling the state uninterruptedly for 15 years and, what’s more, counts 26 out of its 29 Lok Sabha seats in its name. But that in a sense is also the problem. On one count, the first cracks of anti-incumbency will inevitably show som­etime—and this may be that time. On the other, MP can hardly yield more seats to the BJP’s national tally. What it has to do is a holding operation—and it may turn out to be a nervy, attritional affair.

The nutgraph stats first, to demonstrate the sheer sweep of the assets the BJP holds here presently (and hence its potential vulnerability). In Madhya Pradesh’s long tradition of bipolar contests, the 2014 general elections saw the BJP’s best ever outing. A 54 per cent voteshare, the highest ever by any party in MP, saw its 11-seat surge, from 16 to 27, the BJP lost one in a by-election. The gap in voteshare between the BJP and the Congress widened from 8 per cent (2009) to a mammoth 19 per cent. This was a traditional stronghold rising up to meet the Modi wave.

Such a sweeping win was bound to leave its high water mark on all spaces—geographical as well as sociological. And so the BJP mopped up all four seats in Bundelkhand, all five in the central region and both seats in Nimad. In both Baghelkhand and Chambal, it won three of four seats respectively. Nearly one-third of the electors were from the age-group of 18-25, and they contributed enthusiastically to the surge. Again, neither rural outback nor qasba nor city was immune to the tsunami.

In terms of caste too, this pattern of near-universal end­orsement of Modi was repeated. Among the OBCs, numerically the biggest social group in the state, the BJP secured 67 per cent favourable votes; only 19 per cent voted for the Congress. Post-poll data analysis showed that the Brahmin and Rajput communities too evinced a higher preference for the BJP. Crucially, even amidst such a pervasive wave, Dalit votes, the second biggest bloc after the OBCs, were almost equally divided between the BJP and the Congress, with the BSP’s support base reduced. Anyway, it was a bloodbath for Congress aspirants, with only stalwarts Jyotiraditya Scindia and Kamal Nath surviving.

But all that’s in the present. And perhaps past. As for the future, there’s one key element people never miss. For all the theories about voter behaviour being different for local polls and for when they vote to get a party in power in New Delhi, fact is that the two events are organically linked. That is, how CM Shivraj Singh Chouhan fares later this year itself becomes a factor going into 2019. So logically, securing the satrapy first is of the essence. Those in the know hint at a twist in the tale though.

Analysts believe more than the BJP or Modi, the biggest challenge is before local poster boy Shivraj himself—he has to do it by himself, ensuring that he retains credibility amid the core constituency he has so painstakingly carved out for the party over a dozen years. Right now, he can any day be caught announcing new schemes, laying foundation stones, inaugurating government programmes. If he has to make any of that stick, it would make sense to complete some of those big projects well before the code of conduct comes into effect later this year.

What helps Shivraj is that he has firm control of the party, very unlike the Congress where the party’s energies get exhausted in the mutual fencing between the Digvijay Singh, Kamal Nath, Jyotiraditya Scindia, Ajay Singh and Suresh Pachouri camps. In the state BJP, none of his political opponents can think in terms of playing games with Shivraj. His stature is so formidable that only the orders of the party high command can override it. Can anything of that sort happen? Well, in the event of a wave of intense people’s fury coming his way in the November polls, all bets are open.

For, it has long been suspected that a fault-line exists between Bhopal and New Delhi. The tricky thing is that a deficit of solidarity can work both ways. Say Shivraj sails through the November test, and stays CM. Even so, his incumbency may not suffice to guarantee a BJP sweep in the 2019 Lok Sabha elections. Conversely, insiders suggest Prime Minister Modi and Amit Shah may not toil too hard for Shivraj right now. Except for the fact that it could be risky and self-­def­eating, Shivraj does make for the perfect sacrificial gambit.

Why so? After over 12 years as the soft-spoken, smiling face of the BJP—at one time even billed as a potential shot for PM—Shivraj has lost a lot of his halo. For one, he is embroiled in several scams, most notably Vyapam. In popular perception, his government is seen as badly battling a lot of corruption allegations.

On top of that, the farmer community is dead set against the state government, particularly in the Malwa belt, an old Sangh playing field. The anger against the ruling saffron party hasn’t ebbed after the police firing in Mandsaur in which four of the five persons killed were Patidars. The community, committed BJP voters for over two decades, is as restive as their brethren in neighbouring Gujarat.

Sure enough, after the firing incident in Mandsaur, Patidar protesters led by the young icon Hardik Patel had done a road-show and visited Patidar-dominated areas in western Madhya Pradesh. More such sallies can be safely expected in the coming months as the campaigning picks up. An advance notice of voter mood here came in the civic body elections last month: the Congress won all three seats in Mandsaur, improved its tally elsewhere and shared nine president’s posts apiece.

The reasons for disenchantment with Shivraj are many: some are universal, some region-specific. Denial of remunerative prices for their produce is what got the farmers in this predominantly rural state into a mood of sullen protests. At another level, the numbers of unemployed youths are rising—a volatile combination.

The Narmada belt is home to an older anger. The poor rehabilitation procedures adopted for the Sardar Sarovar Dam could affect the BJP in at least two Lok Sabha seats, Khargone and Khandwa. Here, over 40,000 families in 200-odd villages have been rendered homeless following an increase of the height of the dam from 121 to 138 meters last year. The tribals here feel Shivraj has surrendered his people’s interests at the altar of Gujarat’s welfare under Modi’s pressure. In the larger scheme, it’s micropolitics. But Madhya Pradesh, a state where babus dominate the levers of governance, is an aggregate of such stories.