It's a nightmare for the BJP and a wild dream come true for the Congress as the latter emerges the single largest party and with its pre-poll alliance partners plus the Left Front crosses the half-way mark. The feel good factor? It's a clear verdict, 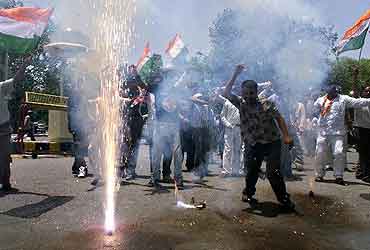 Let's indulge in what could cynically be dismissed as a cliché: the collective wisdom of Indian voters once again manifests the maturing, strengthening and, indeed, a ringing triumph of democracy. More than anything else, it is humbling to be confronted with the verdict delivered compared to what the various opinion surveys and analysts had everyone believe till the morning of counting.

The exit-pollsters might take some comfort in the fact that their error margins and caveats could explain away this stunning verdict, but it is humbling indeed once again to remind ourselves that even they showed at the best - or worst - that we were in for a fractured mandate resulting in instability at the centre, with the formidable duo of Maya and Mulayam, apart from many other small parties, dictating terms. That the nation has been spared the disgrace of such wranglings, horse-tradings and deal-makings on either side is perhaps the biggest feel good factor in these results.

The exit-pollsters could even try to lay claim to getting the broad trends right, but what has been conclusively proven to be wrong is the final tally for the two leading parties. It was confidently asserted by all -- and not just by the BJP -- that while the NDA might struggle to get a majority, the BJP would still emerge as the single largest party, with the Congress barely, if at all, improving its tally (that is, after the first round of the exit polls, before which many had grave doubts about India's oldest party even reaching triple figures). But if it is a time to gloat for anyone, it is for the common Indian voter - that great unifier in the aggregate of diversity - by cutting the BJP down to size and not voting decisively for Congress, the disgust for the performance and pronouncements of the two has been amply demonstrated, and yet instability at the centre avoided. The silent majority has finally spoken.

While this is not the time to indulge in even an attempt at a full analysis, the simplistic answer would be to give in to the temptation of invoking anti-incumbency (AP, Karnataka, Kerala, Punjab, Haryana; the states of Chattisgarh, MP, Rajasthan and Delhi perhaps get exemption due to the "honeymoon period" of six months). Even more sobering would be to reflect on the fact that as many as 25 ministers of the Vajpayee government, including such heavyweights as Murli Manohar Joshi, Ram Naik and I.D. Swami and the speaker Manohar Joshi, have been defeated at the hustings. A clear case of being seen as out of sync with the policies of reforms. Likewise, the voters have gone in for change by refusing to elect Shivraj Patil and P.M. Sayeed, from Latur and Lakshadweep respectively, from where they had been elected consecutively for the last seven successive terms.

But then how does one account for the best ever performance by the Left Front? Surely, even if we attribute its success in Kerala to the faction-fighting in the ruling Congress, the results in West Bengal are perhaps more reflective of lack of credibility of the other claimants for power. Complex processes are a result of a multiplicity of factors at work but perhaps one need not dwell on it too much, given that the temperamental Mamta dee and her cabal are hardly seen as credible alternatives.

It might be -- and indeed, going by the RSS and VHP press-statements, is -- tempting for the hard-Hinduttva supporters in and out of BJP to blame the party's "moderate-line" on Muslims, Pakistan and the "Kashmiri terrorists" for the party's stunning defeat, blaming it for having sold out the "Hindu interests" but it would be equally more important to dwell on why the BJP thought it necessary to try to widen its appeal. More productive perhaps might be to look at these not as losing propositions per se, failing in this case for being perceived by many as cynical electoral ploys (the people also seem to have been harsh on those individuals who while commanding respect across party-lines, were seen to have given in to electoral opportunism -- Arif Mohammed Khan and Bhupen Hazarika are a case in point. The success of some of the film-stars and other celebrities perhaps needs a more nuanced and individual examination). The inconsistency and flip-flops on these and contentious issues such as Ayodhya, UCC and article 370 are other broad areas worth examining.

The statements from the RSS and the VHP should be an important reminder of  the pitfalls ahead. It would be up to the new government to tackle these issues head-on with sincerity and imagination. It might well be worthwhile to pre-empt any opposition on any of these policies by inviting the BJP for public consultation so as to evolve a national consensus.

While the BJP--particularly its spokesperson Pramod Mahajan first and then the Prime Minister, as we write--has been gracious and candid in accepting this stunning and unexpected defeat, it would serve the party and the new rulers on Raisina Hill to dwell on the hype factor--the disconnect between the "feel good" and "India Shining" on one hand and the stark realities of those for whom these terms were cruel jokes at their expense.

Equally sobering would be to reflect on the Congress performance in Gujarat. The indictment of the "modern day Neros" and the barbarity of the Best Bakery and Bilkis Bano cases, coupled with the arrogant contemptuous language employed by some of them perhaps are some of the indicators, apart of course from the stark reality of the BSP--the Bijli, Sadak, Pani-- issues. In this regard, it would be worthwhile to reflect on the track-record, in particular, of Congress party in general and two of the Congress winners from Delhi and how despite electoral victories in the immediate aftermath of 1984 anti-Sikh riots, it has also taken many years of political wilderness for these individuals to regain the public's trust. It remains to be seen, however, what they do with it.

In the end, even at the cost of repeating ourselves, it is important to place on record the lesson we all forget -- it ain't over till the fat lady's sung. And in this case, it seems, there was a strong, silent (perhaps we were deaf?),  invisible (because we were blind?) wave of protest, at being taken so much for granted by the ruling classes and the media which presumed to speak for all of the franchised, that found articulation and expression in this resounding, indeed, stunning verdict.