Spain deserved the win only because they were making moves and making attempts. Indians hardly had a look at the rival goal. 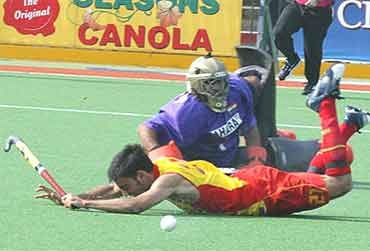 It was an extremely disappointing start to India's campaign at the Champions Trophy in Lahore. Not because we lost the match heavily, but merely because the difference between the two teams was by no means as large as the 4-0 scoreline suggested.

First and foremost, getting into the Champions Trophy itself was a huge bonus for India. With Australia pulling out, India got a great chance to play some games against top class teams.

But sadly the first game showed that there really was no plan. The Indians were just not attacking and there were no planned moves. We also got no penalty corners and there were hardly attempts on the goal, all showing that the team never did show a scoring mood. In fact with such emphasis on defence, there would be chaos at some stage.

Even though we held the Spaniards goalless for the first 40-odd minutes, it was almost as if the team management was going to be satisfied with a draw. That is certainly no way to approach a match in such a high-class competition. If Spain won, it was because they were more active on the field.

In contrast, the Indians were defensive in their posture almost from the start. We began with just three forwards. I don't know whether that is an admission that we cannot score or was it a plan to simply keep the scores down and defend.

So, what happened in the later stages of the match was that India began fading away in virtually all aspects and they were also showing desperation, and as a result Spain stepped up the gas and slammed three goals in closing stages and the scoreline suggested a one-sided match.

If the Indians do want to take back something from this match, it has to be Adam Sinclair's play. He was looking good and unfortunately, India's only scoring attempt taken by him was disallowed for being high. That looked harsh.

Alex Fabregas got the first goal in the 42nd minute and once that goal was conceded, the Indians became too desperate.

And that backfired as Sandeep Singh found himself ejected with a tackle on Eduard Arbos. That further hampered the Indians and that's when the floodgates opened.

While that ejection did not directly result in more goals, the Indians looked demoralised. And in the final ten minutes, Arbos, Santiago Freixa (off a penalty stroke) and Juan Escarre scored once each to inflict a big defeat on India.

Coming to think of it, maybe the team was lulled into a false sense of confidence after we had drawn the two-match series against Spain 1-1. I got the feeling that Spain were trying out a few things while in India and in Lahore, they were more assured and confident.

The Indians have also succumbed to that old failing, of conceding goals in last quarter. It is something that is almost repetitive when we talk about Indian hockey, but nothing seems to have been done about it.

To be honest, with the team playing so defensive, and there being no attacks worth the name, there had to be defensive lapse and goof-ups and they are bound to result in goals. That's what happened exactly. Maybe, a change in tactics and little more aggressive play, which is more in Indian nature can help.

Further, Dilip Tirkey could do some plain talking to his teammates and tighten that defence, which in recent times has shown some vigour, but that was missing against Spain.

Spain deserved the win only because they were making moves and making attempts. Indians hardly had a look at the rival goal. Through the match India barely had a couple of chances and we got no penalty corners.

What the Indians now need to do is forget that this match took place and think afresh.
PTI