At this grim moment, we can do nothing to stop the ongoing invasion. But that does not mean that the task is over for people who have some concern for justice, freedom, and human rights. Far from it. 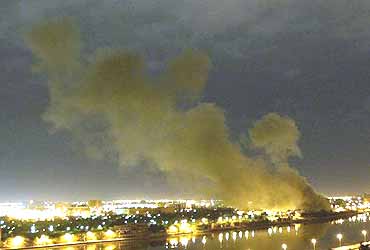 At this grim moment, we can do nothing to stop the ongoing invasion. But that does not mean that the task is over for people who have some concern for justice, freedom, and human rights. Far from it. The tasks will be more urgent than before, whatever the outcome of the attack. And about that, no one has any idea: not the Pentagon, the CIA, or anyone else.

Possibilities range from the horrifying humanitarian catastrophes of which aid and relief agencies that work in Iraq have been warning, to relatively benign outcomes – though even if not a hair is harmed on anyone’s head that will in no way mitigate the criminality of those willing to subject helpless people to such terrible risks, for their own shameful purposes.

As for the outcomes, it will be a long time before preliminary judgments can be made. One immediate task is to lend what weight we can to more benign outcomes. That means, primarily, caring for the needs of the victims, not just of this war but of Washington’s vicious and destructive sanctions regime of the past ten years, which has has devastated the civilian society, strengthened the ruling tyrant, and compelled the population to rely on him for survival.

As has been pointed out for years, the sanctions therefore undermined the hope that Saddam Hussein would go the way of other murderous tyrants no less vicious than he. That includes a terrible rogues gallery of criminals who were also supported by those now at the helm in Washington, in many cases to the last days of their bloody rule: Ceausescu, to mention only one obvious and highly pertinent case.

Elementary decency would call for massive reparations from the US; lacking that, at least a flow of aid to Iraqis, so that they can rebuild what has been destroyed in their own way, not as dictated by people in Washington and Crawford whose higher faith is that power comes from the barrel of a gun. But the issues are much more fundamental, and long range. Opposition to the invasion of Iraq has been entirely without historical precedent. That is why Bush had to meet his two cronies at a US military base on an island, where they would be safely removed from any mere people.

The opposition may be focused on the invasion of Iraq, but its concerns go far beyond that. There is growing fear of US power, which is considered to be the greatest threat to peace in much of the world, probably by a large majority. And with the technology of destruction now at hand, rapidly becoming more lethal and ominous, threat to peace means threat to survival.

Fear of the US government is not based solely on this invasion, but on the background from which it arises: An openly-declared determination to rule the world by force, the one dimension in which US power is supreme, and to make sure that there will never be any challenge to that domination. Preventive wars are to be fought at will: Preventive, not Pre-emptive.

Whatever the justifications for pre-emptive war might sometimes be, they do not hold for the very different category of preventive war: the use of military force to eliminate an imagined or invented threat. The openly-announced goal is to prevent an challenge to the "power, position, and prestige of the United States."

Such challenge, now or in the future, and any sign that it may emerge, will be met without overwhelming force by the rulers of the country that now apparently outspends the rest of the world combined on means of violence, and is forging new and very dangerous paths over near-unanimous world opposition: development of lethal weaponry in space, for example.

It is worth bearing in mind that the words I quoted are not those of Dick Cheney or Donald Rumsfeld or other radical statist extremists now in charge. Rather, they are the words of the respected elder statesman Dean Acheson, 40 years ago, when he was a senior advisor to the Kennedy Administration. He was justifying US actions against Cuba – knowing that the international terrorist campaign aimed at "regime change" had just brought the world close to terminal nuclear war. Nevertheless, he instructed the American Society of International Law, no "legal issue" arises in the case of a US response to a challenge to its "power, position, and prestige," specifically terrorist attacks and economic warfare against Cuba.

I bring this up as a reminder that the issues are deep-seated. The current administration is at the extremist end of the policy-planning spectrum, and its adventurism and penchant for violence are unusually dangerous. But the spectrum is not that broad, and unless these deeper issues are addressed, we can be confident that other ultrareactionary extremists will gain control of incredible means of devastation and repression.

The "imperial ambition" of the current power holders, as it is frankly called, has aroused shudders throughout the world, including the mainstream of the establishment at home. Elsewhere, of course, the reactions are far more fearful, particularly among the traditional victims. They know too much history, the hard way, to be comforted by exalted rhetoric. They have heard enough of that over the centuries as they were being beaten by the club called "civilization."

Just a few days ago, the head of the non-aligned movement, which includes the governments of most of the world’s population, described the Bush administration as more aggressive than Hitler. He happens to be very pro-American, and right in the middle of Washington’s international economic projects. And there is little doubt that he speaks for many of the traditional victims, and by now even for many of their traditional oppressors.

It is easy to go on, and important to think these matters through, with care and honesty. Even before the Bush administration sharply escalated these fears in recent months, intelligence and international affairs specialists were informing anyone who wanted to listen that the policies Washington is pursuing are likely to lead to an increase in terror and proliferation of weapons of mass destruction, for revenge or simply deterrence.

There are two ways for Washington to respond to the threats engendered by its actions and startling proclamations. One way is to try to alleviate the threats by paying some attention to legitimate grievances, and by agreeing to become a civilized member of a world community, with some respect for world order and its institutions.

The other way is to construct even more awesome engines of destruction and domination, so that any perceived challenge, however remote, can be crushed – provoking new and greater challenges. That way poses serious dangers to the people of the US and the world, and may, very possibly, lead to extinction of the species – not an idle speculation. Terminal nuclear war has been avoided by near miracle in the past; a few months before Acheson’s speech, to mention one case that should be fresh in our minds today. Threats are severe and mounting.

The world has good reason to watch what is happening in Washington with fear and trepidation. The people who are best placed to relieve those fears, and to lead the way to a more hopeful and constructive future, are the citizens of the United States, who can shape the future. Those are among the deep concerns that must, I think, be kept clearly in mind while watching events unfold in their unpredictable way as the most awesome military force in human history is unleashed against a defenseless enemy by a political leadership that has compiled a frightening record of destruction and barbarism since it took the reins of power over 20 years ago.