As l'affaire Nano shows, change in India takes time, but deliberated upon, the result of a struggle, debate and compromise, the effects are longer lasting. That's perhaps the only way to govern a multi-everything entity like India. 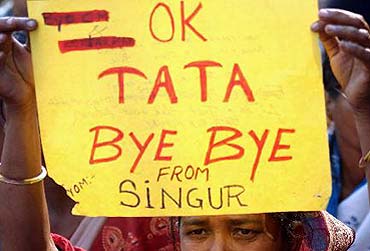 Used to treating India as an emerging giant and a poster child of globalization, the world had to pause when violent protests stopped a much-publicized project in its tracks. The fact that the famous Tata group was forced to scrap plans to make the $2,500 Nano car in West Bengal might reinforce the impression that, despite impressive industrial strides, India is not ready for serious investment.

But those who followed the aftermath of the publicised pullout noticed that the car project is still very much on track, in another location, the western state of Gujarat. At one level, Tata’s surrender to peasant groups and opposition parties is a blow to the state, sending a negative signal about India’s willingness to accept investments; at another, it’s a testament to the vibrancy of civil society. The birth pangs of Tata Nano offer an example of how a democratic India deals with the inevitable turmoil of industrialisation and global integration.

The broader issue is how one of India’s leading companies negotiated its way out of the kind of problem that bedevils big business – oil, mining, gas and other large manufacturing companies routinely face opposition from indigenous groups, local communities and political parties in many parts of the world. In India, the challenges are particularly acute: Some two-thirds of India’s billion people are officially categorised as farmers, and farm income produces an increasingly smaller proportion of the country’s gross domestic product. The Nano episode highlights a central issue. Given that agricultural productivity does not rapidly boost incomes and industrial growth helps countries progress faster, how can poor countries like India emerge from poverty sooner, if they cannot make the move from agrarian to manufacturing sectors quickly and painlessly?

This is not the only complicated project for Tata or West Bengal. Indeed, in neighboring Orissa, Tata has faced vigorous opposition from indigenous communities over a steel plant in Kalinganagar. Protests turned violent, and unlike an automobile plant, a steel plant can’t be located too far from raw materials. West Bengal’s plan to build a petrochemical complex in Nandigram, where Indonesia’s Salim group planned to invest, met opposition, too. Ironically, reputable human-rights groups have credibly accused the ruling Communist Party–led Front of spreading a reign of terror in Nandigram in support of the project. Again in Orissa, groups opposed to another major steel investment – by POSCO of South Korea – have abducted and since released company officials.

Something seems rotten in the state of India, but contrary to campaigning organisations’ assertions, this is not a simple tale of greedy corporations stealing resources from marginal farmers. Rather, it shows the dysfunctional approach of India’s state governments in handling the sensitive issue of land ownership. The state’s record in this matter since India’s independence in 1947 has been abysmal, inspiring little confidence.

The main problem concerning Nano was Tata dealt with the government to acquire privately owned land. West Bengal’s Communist-led coalition, ruling the state for 31 years precisely for such policies, is proud of transforming sharecroppers into landowners. Tata wanted more than 1,000 acres of land; the government acquired the land, and as it often happens with such transactions, some acquisitions were made under duress, by threat or with misleading information, campaigners allege. Local communities and an opposition party demanded Tata return 400 acres. As protests turned violent, Tata said it would move to protect employees, sub-contractors and communities that supported the project. Ratan Tata, the group’s head, said that rather than negotiate at gunpoint, he preferred leaving West Bengal.

Ironies multiply, including a leftist government wooing one of India’s oldest private-sector groups and the Tata group facing opposition. For more than a century, Tata, which derives three-fifths of its revenues overseas and whose subsidiaries include steel and auto plants in the UK and manufacturing and services operations in all parts of the world, has built its reputation as an enlightened corporate citizen.

Indeed it’s at the forefront of corporate social responsibility. Its steel plant was the first company in India to conduct a social audit in the 1970s, before such ideas were considered worthy among Western companies. Its workers had eight-hour shifts before the International Labour Organisation recommended such working conditions; it accepted collective bargaining before legally required. Its philanthropic record, too, is impressive, funding some of India’s premier research institutes for sciences, social science, environmental engineering, state-of-the-art hospitals and an arts complex on Bombay’s waterfront. In context, though, such details do not matter: Companies cannot offset bad conduct in one area with good deeds elsewhere, not to suggest that Tata did anything illegal in West Bengal.

At a deeper level, the protests expose a major weakness in India: While smaller projects, or those dealing with the services sector – banking, information technology, even healthcare – progress with relative ease, large infrastructure or manufacturing projects that may require relocation or substantial changes in the lifestyles of rural communities face major roadblocks, literal and metaphorical. This is partly because of the rural-urban divide in India and the perception that economic reforms India initiated in 1991 only benefited the cities or the middle class and wealthy. Many campaigners point out thousands of farmers took their own lives due to inability to repay debt, even as cities become more prosperous. Some of that alienation has turned violent: In remote parts of many rural districts, Maoist groups have considerable sway, with some reports suggesting that Maoists run some parallel administrations in as many as a fifth of India’s districts.

As urban India races ahead, some observers expect rural India getting left behind, to be attracted to mounting opposition to industry-led progress. From an investor’s point of view, is China, where such protests are quelled more easily, a better investment bet?

The narrative might seem accurate, except for what happened on Oct 7, as Tata announced its new Gujarat location in Sanand, with other states – including Sri Lanka – vying with offers. This is debate, Indian-style. Making radical change in democratic India takes time precisely because securing consent is essential – change cannot be imposed by fiat. Because that struggle is hard, reversal is equally difficult, if not impossible.

Securing consensus in a billion-strong country where everyone has an opinion cannot be quick. As a democracy, India cannot impose pass laws, as in South Africa’s apartheid regime, or restrict rural-to-urban migration, as China attempts. It must manage the transition in a humane way. The state can take some simple steps, such as getting out of the business of acquiring land for private purposes, so that companies negotiate directly with the people, with the state restricting its role to regulator and enforcer of the law.

Change in India takes time, but deliberated upon, the result of a struggle, debate and compromise, the effects are longer lasting. That’s perhaps the only way to govern a multi-everything entity like India. The drama in West Bengal was not a step away from globalisation, but rather a reflection of a nation making up its mind on how to engage with the world. Indeed, West Bengal’s Chief Minister Buddhadeb Bhattacharjee said as much in early November: "Globalisation is a must. Any country that chooses not to be part of globalisation is bound to be doomed."

Salil Tripathi is a London-based writer who specialises in Asian and international economic affairs. He is former correspondent for India Today and Far Eastern Economic Review. Rights: © 2008 Yale Center for the Study of Globalization. YaleGlobal Online