Death Stalks Malkangiri. And It Is Called Development.

The recent deaths of children and 'maoists' in Odisha may be pointing towards the same problem... 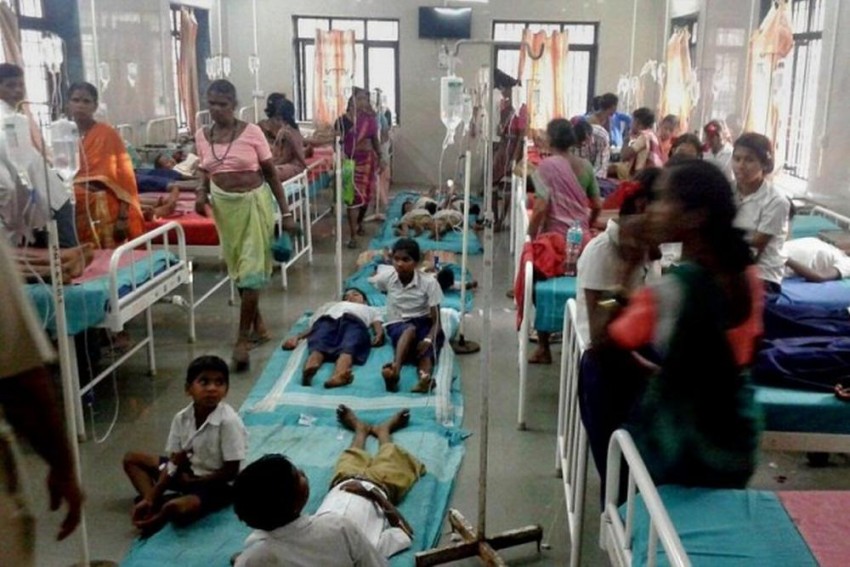 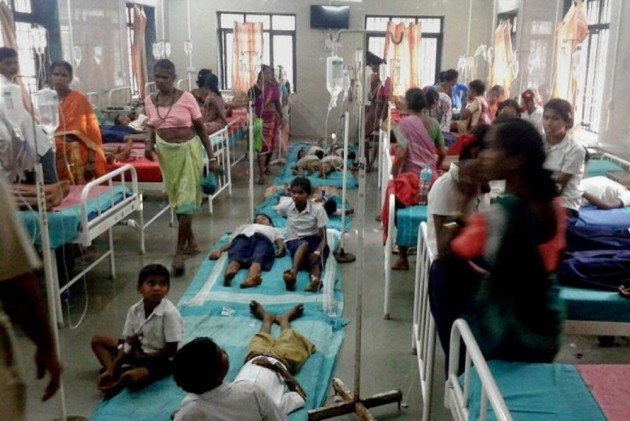 Dialectics, binaries and facts elude you in the serpentine forest paths of Malkangiri, the southernmost part of Orissa abutting Andhra Pradesh, Telangana and Chhattisgarh. Recently, Malkangiri was in the news. Or was it? Surely, no ticker on our TV screens or screaming headlined in newspaperd. Here corpses have piled up—corpses that reek of something that makes it difficult to smell the democracy in the air—the air of the world’s largest democracy blowing through this world in the back of its beyond.

Scene 1: More than 120 dead children, bodies left behind in a month (unofficial local sources peg it at 300-plus) by a grim reaper called Japanese Encephalitis (JE)—pinpointed as cause of medical mayhem in the region, way back in 2012, but to no avail.

Scene 2: Mutilated bodies of 39 Maoist guerrillas and other adivasi villagers killed in one of the most successful counter-insurgency operations in this insurgent zone, which newspapers have often reported as the “rear area” of the Maoists, where the People’s Liberation Guerrilla Army that is engaged in a long-drawn bloody war with security forces, mostly in the southern parts of Chhattisgarh and the eastern parts of Maharashtra, often retreats to recoup and regroup, and where the party CPI (Maoist) claims to have set up parallel institutions of governance, which it calls “Janatana Sarkar”. With the central government having ramped up counterinsurgency operations and Union home minister foreseeing an end of the Maoist rebellion in five years, it becomes a politically fraught task to ask if a causal connection can drawn between the bodies of dead children and the mutilated bodies of the guerrillas.

To test the waters of free speech, let’s try doing just that. Let’s ask: Is there a chronology to these deaths? Can the two kinds of death be brought into the same script? Who killed the Maoists and why? Who killed the children and how? Questions that may echo in the hills of Malkangiri, but move not a leaf in the concrete gardens of power in a faraway land—a faraway away land is what the seat of power looks like when there are bodies of children and mutilated guerrillas around. Digital India, clearly, is yet to bridge the distance.

In sharp contrast, Make in India, with its Orissa counterpart, “Make in Odisha”, is not that far away from remote regions such as Malkangiri. The Make in Odisha website flaunts this tagline: “In the land of Sun Temple, opportunities shine bright.” Indeed, in the land of the Sun Temple, the sun shines bright every day on mines of mica, bauxite, gemstones, iron ore, limestone, manganese ore, mineral sand, nickel ore, pyrophylite, quartz and other varieties of mineral wealth. Malkangiri, in particular, hosts dolomite, asbestos, tin and steatite in its natural underground vaults. Make in India cannot happen if these minerals are not used to make money. Who, then, stands between Make in India and the minerals under the topsoil? Well, Malkangiri does—its people, hills, forests, the birds and animals for whom it is habitat, the mushrooms that grow from tree barks, the crops that grow with human sweat, which stops Make in India from meeting Malkangiri, and thereby wasting the opportunities of economic growth shining on the land of the Sun Temple.

The children who died fell not to the vector mosquitoes that carry Japanese Encephalitis from body to body. For then, how was it—considering that mosquitoes cannot discriminate on the basis of caste—that almost all the dead children were adivasis or Dalits, and 63 percent were girls? If a public health system in tatters reduces the survival chances of some section of the population so drastically compared to others, the buck stops somewhere far away from the killing fields of Malkangiri—where public health policies are made and from where they are implemented.

The understaffed government hospital at the district headquarters was the only one with the minimum equipment needed to fight JE. They could not send the patients pouring in to cities like Cuttack or Berhampur, so they kept dumping them in the ICU; from there the children came out dead, one after the other. The already malnourished tiny bodies kept falling to the dangerous viral disease. An epidemic broke out. Numbers kept swelling, a month passed.

Was the state caught off guard? Was one month too short a period to respond to such a widespread outbreak of a dangerous disease? Children have died en masse in Malkangiri before—and from JE. A fact-finding team of the Right to Food Campaign points out that 36 children were recorded dead due to JE in 2012 and 24 in 2014, in Malkangiri alone. Yet the public health system was caught unawares by another round of the same epidemic.

To give the devil it’s due, the administration were busy, preparing enthusiastically for the Make in Odisha conclave, held from November 30 to December 2. Of course, it takes preparation, time and allocation of money and responsibilities. Who has the time to build emergency public health facilities, even when a threat of epidemic is looming large? Which state or central government has the capacity to spend an estimated whopping Rs 10 crore to take preventive measures for a deadly disease such as JE? The three-day Make in Odisha Conclave, thronged by investors from all over the world drawn by the investment possibilities in Orissa, had a proposed budget of Rs 20 crore, by the way.

The Orissa government has always denied the chronic JE outbreak. This time too, an expert team proclaimed that the deaths were not due to JE, but because of encephalopathy caused by the consumption of toxic “bana chakunda”. They came to this conclusion when they found the toxin in urine samples of five of the 120-300 dead children. Whether these same children, who died of the JE symptoms, tested positive or negative for JE virus too, was not ascertained. The kids are dead and buried, so there is no way one can cross-check, but this denial mocks at the dead children and tries to put the blame on the “uncivilised tribals” and their “erratic” food habits. It suggests that suddenly the bana chakunda seeds turned poisonous and the children, including toddlers and infants, enamoured by some pied piper started stuffing themselves with these toxic seeds, for over a month. Not even the hundreds of children dropping dead all around could stop them.

Now, suppose this did happen, what drove the children to eat bana chakunda seeds? How hungry were they, and from how long? How did the seeds become the only edible option? And how frail were their bodies that they succumbed to its toxicity? More questions echo in the hills of Malkangiri.

Turn now to the other set of bodies—the mutilated ones—adivasi-turned-Maoists (does adivasi remain adivasi after joining the Maoists; at least not when the bodies are counted, it appears from most reports that mention the numbers killed in the counterinsurgency operation). Some of these hungry adivasis—faced with toxic seeds as only edible option—would have decided at some point to join the Maoist guerrillas that promises change and claims to be fighting for an end to the regime of hunger and fear. The central government declared them the “biggest internal security threat”, way back during the days of Manmohan Singh at the helm. Faced with the Maoist threat, chronic poverty, hunger and malnutrition, besides healthcare and education systems in a shambles, all paled in comparison; the government saw no threat in any of those. What seemed threatening, instead, were impoverished people in large numbers refusing to succumb to destitution, and fighting the odds stacked against them.

What will happen if these people survive? Malkangiri then will not melt into the brick klins or sprawling construction sites in the rest of the country; it will not survive as homeless footpath dwellers under flyovers in ruthless cities. But successive governments have said the Maoists are a threat to development and should be wiped out. So far, development, in Malkangiri, has not meant food, safe drinking water, irrigation facilities, healthcare or education. Many believe it has only brought destitution, displacement and now death in its wake.

The war between mining barons, the administration and the security forces, on one side, and a ragtag army of people refusing to give up, on the other, is an old one. The story of accumulation is a primitive one, so is that of resistance. This war is lopsided, the strengths are mismatched, yet no one has decisively won or lost yet. Malnutrition is a weapon in this war, in the hands of the State, to debilitate its enemy, the people. State violence is only another expression of this ugly spiralling war. The 300 children and the 39 Maoist guerrillas are its martyrs.

The theatre of this war is expanding every day. We can still afford to ignore Malkangiri, keep it off the headlines, and carry on with our ‘cashless’, demonetised, dwindling privileges. The stench of death from Malkangiri does not go beyond its borders. The media turns its gaze away. From this blind spot, the occasional blip in the media retina comes with a successful counterinsurgency operation in which adivasi bodies, guns in hand, without guns in hand, fall to police bullets. Wails of mothers and gunshots echo only in the hills. They don’t reach us, but that does not necessarily make us safe. We might choose to ignore Malkangiri, but Malkangiri may not. It is going to haunt us. May be from a distance now, but even that might change—and soon.

Why Is There A 'Problem Of Extreme', Allow Use Of Old Notes In Some Places, Supreme Court Tells Centre