As if Hall's career-best 163 in a marathon 588 minutes was not enough to torment the Indian spinners, toiling relentlessly on a 'lifeless track, debutant Zander de Bruyn's 83 multiplies the hosts' woes as South Africa place themselves in a commanding 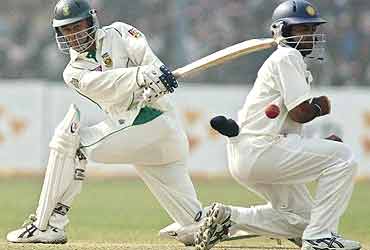 Andrew Hall gave a remarkable display of patience and concentration to crack a record-breaking maiden century as South Africa batted their way to a commanding position in the first Test against India today.

The right-handed Hall slipped into the new role of an opener with consummate ease to score a career-best 163 and take the tourists to a comfortable 459 for seven in their first innings at close on a dreary second day.

The 29-year-old occupied the crease for a marathon 588 minutes and achieved the milestone of becoming South Africa's highest individual Test scorer on Indian soil on a highly frustrating day for the hosts who could manage to take just three wickets.

Debutant Zander de Bruyn also made it a memorable Test for himself as he mixed caution with aggression to score a 206-ball 83, which included six fours and three sixes, on a slow track at the Green Park stadium.

Shaun Pollock was batting on 31 and wicketkeeper Thami Tsolekile was giving him company on five at stumps.

This was the highest first innings total recorded by any visiting team at this venue.

The Indian bowlers were made to toil hard to get any success on the placid pitch though veteran leg spinner Anil Kumble had the satisfaction of recording his 28th five-wicket haul in Test cricket. The famed Indian batsmen will now have to brace themselves up for chasing a mammoth first innings total as, apart from the two not out batsmen, spinner Robin Peterson was also regarded as a decent batsman.

With three full days left, it remains to be seen whether the South African captain Graeme Smith will declare the innings by the first hour's play tomorrow and have a go at the Indian batsmen who have been a pale shadow of themselves in recent times.

Resuming at the overnight score of 230 for four, the South Africans lost Boeta Dippenaar (48) early in the day but it turned out to be tough going for the hosts from there on.

The Indians took the second new ball after 93 overs and both Zaheer Khan and captain Saurav Ganguly obtained some movement from the slow track to repeatedly beat the batsmen in the first hour's play.

Ganguly claimed the wicket of Dippenaar inducing him to edge an outgoing delivery to Dinesh Kaarthick behind the stumps. Dippenaar faced 127 balls during his knock of 48 which came in 154 minutes and was laced with five boundaries. 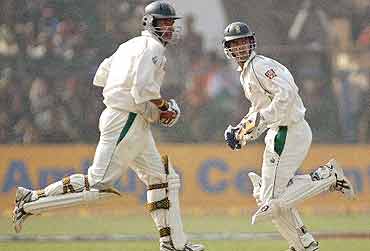 De Bruyn appeared a trifle shaky in the initial stages but gradually grew in confidence to ensure no more wickets fell in the pre-lunch session which saw the visitors adding 72 runs to their overnight tally. The Proteas managed to add just 28 runs in the first hour's play but accelerated the pace of scoring to some extent after the drinks break.

Hall swept Kumble to the fine leg fence to notch up his maiden century after batting for a marathon 436 minutes. He eclipsed his previous highest score of 99 not out achieved against England at the Leeds in 2003.

Harbhajan Singh was introduced into the attack immediately after the drinks break but the off-spinner could not really make an impact against the two well-set batsmen on the slow pitch.

Hall achieved the statistical milestone of becoming South Africa's highest scorer on Indian soil before he fell to Kumble for 163 which served as the backbone of the South African innings.

Hall, generally an attacking batsman, curbed his natural strokeplay to play a disciplined knock as he occupied the crease for a marathon 588 minutes and faced as many as 454 balls. His heroic effort contained 17 boundaries. The wily Kumble brought an end to his vigil by knocking down his stumps around the legs much to the relief of the home team who toiled hard to break the sixth wicket partnership.

The pair of Hall and de Bruyn stitched 144 runs for the sixth wicket to put their team in the driver's seat in the post-lunch session which saw the home team get only one wicket through Kumble.

Kumble recorded his 28th five wicket haul in Test cricket when he scalped Hall, who paid the price for trying to play inside the line and losing his leg stump in the process.

Hall's 163 was the highest individual score by a South African on Indian soil, eclipsing Daryll Cullinan's 153 not out during the Kolkata Test in 1996-97.