The latest attack intended to target the Indian Consulate at Jalalabad brings the spotlight on New Delhi once again, as the world watches how it responds to protect not only its own interests, but, crucially, the fragile order that has been establis 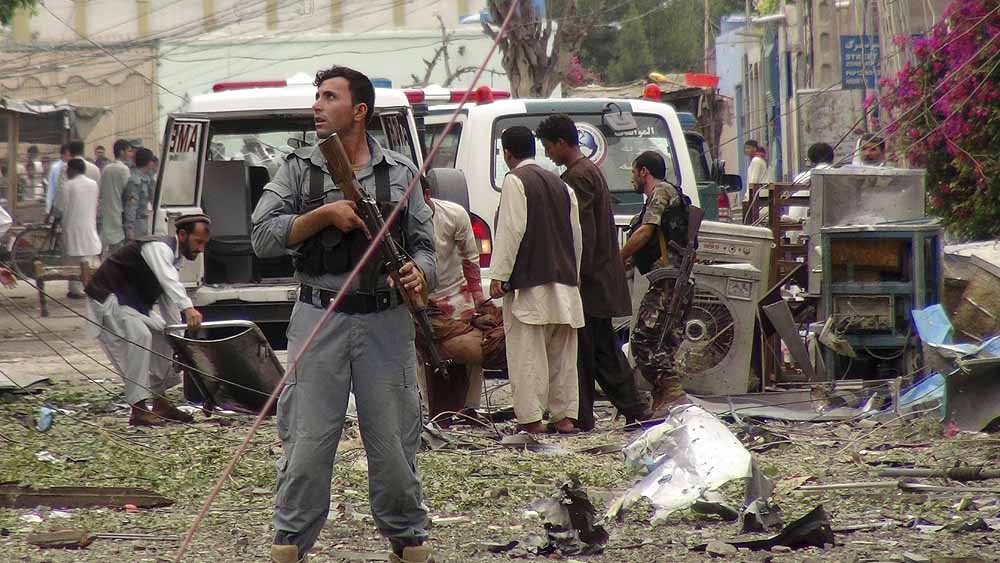 In a suicide attack intended to target the Indian Consulate at Jalalabad, the capital of the Nangarhar province of Afghanistan, nine Afghans, including at least eight children, were killed, and another 24 were wounded on August 3, 2013. The three attackers were also killed. All Indian officials in the Consulate were safe. Nangarhar Province Police Chief General Sharifullah Amin confirmed that the consulate was the intended target of the blast.

According to reports, when Afghan Security Forces (SFs) intercepted the attackers' red Toyota Corolla at the first checkpoint leading to the Consulate, at a distance of about 15 to 20 metres, two terrorists wearing suicide jackets got off and opened fire on them. While one of the attackers was killed by the SFs, the second detonated his suicide jacket. Simultaneously, the third militant detonated the explosive-packed car. Deputy Police Chief of Nangarhar Province Masum Khan Hashimi disclosed, "It was a very heavy car bomb that totally destroyed the nearby market." Reports also said that the explosion was followed by gunfire which lasted for at least an hour.

This was the second attack on the Consulate at Jalalabad. On December 15, 2007, two bombs were lobbed into the Consulate. There was, however, no casualty or damage on that occasion. India has three other Consulates in Afghanistan— at Kandahar, Heart, and Mazar-e-Sharif.

The Consulate attacks fall into a larger pattern. According to the South Asia Terrorism Portal (SATP) database, a range of Indian interests in Afghanistan have been systematically targeted, including the Embassy in Kabul, other Consulates, and numerous developmental projects as well as people involved in these. Partial data indicates at least 13 such attacks, resulting in 103 fatalities since 2003. In the worst such attack, on July 7, 2008, a suicide attack on the Indian Embassy in Kabul killed 66 persons. Five Indian Embassy personnel, including two senior diplomats— Political Counsellor V. Venkateswara Rao and Defence Adviser Brigadier Ravi Datt Mehta— and Indo-Tibetan Border Police (ITBP) staffers Ajai Pathaniya and Roop Singh, were killed in the attack.

The last attack on Indians in Afghanistan had taken place on October 11, 2010, when two Indian nationals were killed in a missile strike launched by Taliban terrorists on an Indian NGO's office in the Kunar Province of Afghanistan.

Though no group has taken responsibility for the latest (August 3) attack, direct involvement of Pakistan's Inter Services Intelligent (ISI) as well as ISI-backed terrorist groups, primarily the Lashkar-e-Taiba (LeT) and the Haqqani Network is suspected. Both the LeT and the Haqqani Network operate out of Pakistan and have a strong presence in the eastern region of Afghanistan, which borders Pakistan and where the city of Jalalabad is situated. Though the Afghan Taliban, in a text message, denied its role in the attack, involvement of the Tehreek-e-Taliban Pakistan (TTP), its Pakistan affiliate, has not been ruled out too. TTP also has significant presence in the region. However, past experiences as well as recent reports indicate the strongest possibility of the involvement of the Haqqani Network, the LeT, or both.

ISI's direct role in this latest attack is suggested in prior disclosures by the Afghanistan National Intelligence Agency spokesperson Lutfullah Mashal, on May 10, 2011, who had revealed that the ISI had hired two persons, identified as Sher Zamin and Khan Zamin, to kill the Indian Consul General of Jalalabad. The ISI's role in the July 7, 2008, attack on the Indian Embassy in Kabul had also been confirmed by former Afghan intelligence Director Amrullah Saleh, who, in a media interview published on January 17, 2011, disclosed: "We had sufficient evidence that it was ISI's plan. We knew they were trying to do something against the Indian Embassy." Referring to ISI's role in the Kabul attack, Mike Waltzin, a US official, had stated, in a TV interview, released on November 2, 2011, "The question was how high in the Pakistani state this went. And the answer was pretty high." An Indian news report, on August 3, 2013, the day of the Jalalabad attack, quoting official sources, had claimed that intercepts confirmed that the ISI paid half a million rupees to two Haqqani Network terrorists in Afghanistan to attack the Indian Envoy in Kabul, Amar Sinha, two weeks earlier. Indeed, security officials from India had visited the Kabul Embassy and the four Consulates thereafter to check preparedness. Significantly, Nangarhar Province Police Chief General Sharifullah Amin admitted that Police in Jalalabad were on an alert for such an attack.

A Pakistani security official has argued: "Why would we do such a thing when we are trying to improve economic ties with India?" Nevertheless, in a veiled reference to Pakistan, India's External Affairs Ministry spokesman Syed Akbaruddin observed: This attack has once again highlighted that the main threat to Afghanistan's security and stability stems from terrorism and the terror machine that continues to operate from beyond its borders. This was clearly an attack not just against India but an attack against the efforts to help the Afghan people overcome the tragic hardships they have endured due to several decades of war.

Akbaruddin asserted further that India would not be deterred by this attack and would continue to assist Afghanistan in its reconstruction and development efforts.

Afghanistan has repeatedly and openly blamed Pakistan for attacks on Indian targets in Afghanistan as well as for sustained activities detrimental to peace in Afghanistan. Warning the people behind the attack, Afghan Foreign Minister Zalmai Rassoul stated that those responsible for the Jalalabad assault "and their financial, ideological and logistical sponsors must realize that they cannot shake the close and strong bond of friendship and partnership between Afghanistan and India through terrorism." Rassoul also informed his Indian Counterpart Salman Khurshid that "Afghanistan will leave no stone unturned to ensure the safety of Indian diplomatic personnel and the Afghan Government is determined to counter the efforts of those inimical to India's friendship with Afghanistan."

India's age old relations with Afghanistan have been gaining in strength in recent times. Reaffirming these ties, Indian Prime Minister Manmohan Singh visited Afghanistan in May 2011, and signed the historic Strategic Partnership Agreement between the Islamic Republic of Afghanistan and India. More recently, on July 30, 2013, the two nations signed a Memoranda of Understanding (MoU) on implementing 60 projects under the USD 300 million Small Development Projects (SDP) scheme, announced during Singh's May 2011 visit. The first two phases of the SDP scheme are nearing completion. A framework MoU for operationalising the third phase was inked in November 2012 during Afghan President Hamid Karzai's India visit. India has already spent $2 billion on reconstruction efforts in Afghanistan, since 2001, where it is currently involved in several developmental projects, including the construction of the Parliament building in Kabul, the Salma Dam and power transmission lines. Several major projects, including the strategically critical Delaram-Zaranj Highway connecting Kandahar and Herat, opening up a crucial trade route through Iran, have already been completed in Afghanistan by India.

Reports indicate that India is also stepping up the training of Afghan National Army (ANA) recruits and personnel in a major way. Afghanistan's demand for supply of military equipment for the Afghan forces is also under consideration in New Delhi.

Pakistan has been significantly shaken by the rising Indian presence in Afghanistan, the country over which Islamabad seeks complete control in the aftermath of the 2014 US drawdown, and appears hell bent on forcing India out. This latest attack is one such effort in that direction. Vivek Katju, India's former Ambassador to Afghanistan, notes, "Pakistan has always sought to limit India's activities in Afghanistan and for this purpose has used a number of instruments, including an attempt to circumscribe the activities of Indian representatives, including Indian personnel involved in assistance projects. There is a valid reason for concluding the involvement of Pakistani state actors in violent attacks on Indian interests in Afghanistan, including our Embassy." Similarly, Jawed Kohistani, a Kabul-based military and political analyst, opined, "Pakistan can't tolerate India's good relations and influence in Afghanistan. Through such attacks, it's trying to push India back, not only from Afghanistan but it also wants India to have less influence in Central Asia."

It is significant that the change of regime in Islamabad has no bearing whatsoever on the orientation of the ISI and the various terrorist proxies it supports and, despite a great deal of 'talking about talks' between India and Pakistan, there is little reason to believe that any significant shift in strategic orientation has occurred, to justify any optimism on this account. Indeed, as the uncertainties of the impending US drawdown escalate, it is inevitable that Pakistan's targeting of the Indian presence in Afghanistan will intensify. It remains to be seen how New Delhi responds to protect not only its own interests, but, crucially, the fragile order that has been established in Kabul.