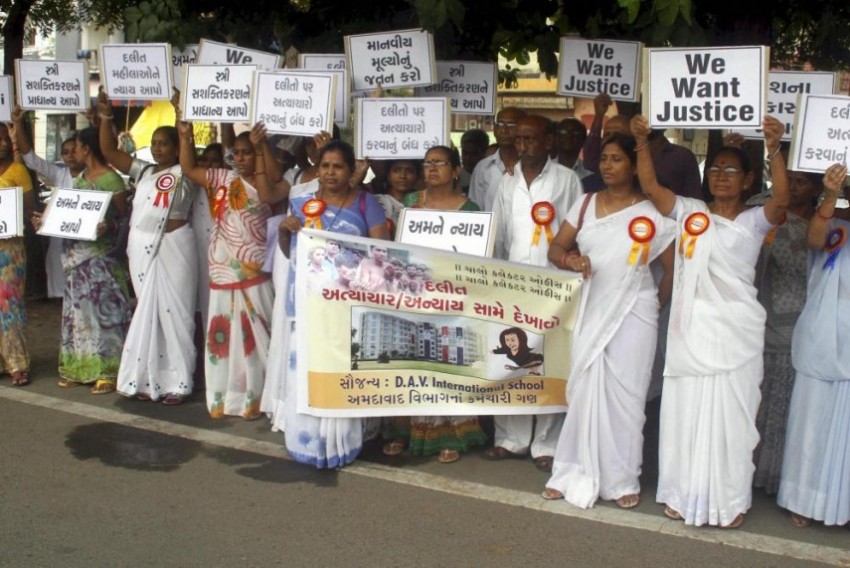 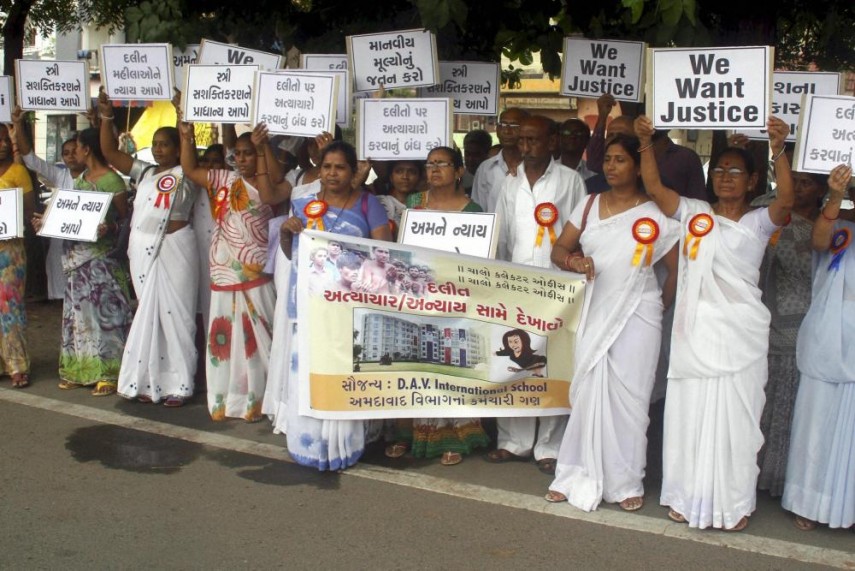 The Dalit march from Ahmedabad to Una seeking justice for the four Dalits who were thrashed by self-styled cow protection vigilantes on July 11 may have found support from across the shores but not nearer home in Una.

Protesters, who returned from the culmination of the march on August 15, found the national highway blocked at Samter village 11km from the venue and a stone-pelting mob on the rampage. The police fired six rounds after 46 teargas shells failed to quell the violence. About 15 Dalits were injured in two incidents of violence besides seven policemen including a deputy superintendent of police and an inspector. Samter is the village accounting for the maximum number of arrests for the Dalit lynching incident where even the police were attacked and their vehicles torched. One of the two people admitted to a Junagadh hospital, 20-year-old Jaswantsinh Bhatti, has a bullet injury.

Jignesh Mevani, the convener of the Una Dalit Atyachar Ladat Samiti (UDALS), said it was yet another example of discrimination against Dalits. "The signs of hostility were all there but the police took too long to take command of the situation," he said.

Mevani has a point. About a dozen villages around Una are Darbar (Rajput) majority villages and there were unmistakable signs that many of these villages were planning to disrupt the Dalit march. Minor skirmishes were reported a day earlier in the countryside as well. The rally was successfully completed due to the strong police arrangements on the main road despite the impediments and assault. But once the rally was over, the villagers reportedly decided to take on the rallyists. "For us, the situation is back to square one," says Balu Sarvaiya, one of the four youth who were beaten up on July11, adding, "the police saw me home after the rally but for how long? I need to be protected in my own home and village. Is it not a traversy in terms?" he said.

Delhi Chief Minister and AAP leader Arvind Kejriwal, who was in Gujarat on August 16 to pay homage to the late Pramukhswami Maharaj-his second visit in a month-was quick to term it "jungle raj" in the BJP-ruled state. "Earlier when the Patels voiced their demands, they were attacked and now it is the turn of the Dalits to face the onslaught," he said. Kejriwal warned the government to stop these atrocities failing which they will find themselves ejected from power.

Gujarat BJP spokesperson Bharat Pandya was quick to counter Kejriwal, saying, "It has become a habit with Kejriwal to denigrate others. He is injecting casteist venom in the state."

While next year's Assembly elections are already beginning to cast their shadows ahead with AAP and the Congress both on the offensive, the Dalit stir shows little signs of flagging despite the departure of Anandiben Patel and the induction of Amit Shah protégé Vijay Rupani. In fact, it has picked up steam with the presence of activists including Radhika Vemula, the mother of Dalit scholar Rohit Vemula, former Gujarat cadre IPS officer Rahul Sharma, JNU students union leader Kanhaiya Kumar and documentary filmmaker Anand Patwardhan.

Though efforts have already begun to sow discord in the Dalit movement through project-based NGOs, who are dependent on the government, Jignesh Mevani, the Dalit lawyer-activist who has done pioneering work in the field of land rights, has emerged as a fire-brand leader. He put the government on a month's notice demanding allocation of five acres of land for all Dalit families, failing which he has threatened a "rail rook" and "jail bharo" stir. All Dalits at the Independence Day rally pledged to give up skinning dead animals and cleaning sewers.

In fact, the Rashtriya Swayamsevak Sangh (RSS) first picked up the anti-BJP signals of Dalit anguish emanating from Una. It sought to assuage ruffled feathers through a samajik sadbhav sammelan (societal harmony meet) organised in Una on August 3 by one of their fronts, the Samajik Samrasta Manch (SMM) where over 70 spiritual leaders attended.

Speaking there, RSS western region head Jayantibhai Bhadesia said, "Political and anti-social people are trying to disturb peace and harmony after July11. The Sangh always favours a samras Hindu samaj. Anti-social activities in the garb of cow protection should stop. We disapprove of untouchability, which is unacceptable." All these words didn't address the local Dalits' ire.

Three days later, Prime Minister Narendra Modi came up with his Dalit interjections: (1) People have set up shop as gau rakshaks and (2) "If you have to shoot, shoot me, but not my Dalit brothers.

Dalit NGOs were quick to retort. Forget action, for four years after three Dalit youths were killed in police firing in Thangadh town of Surendranagar district in September 2012 when Modi was CM, the report remains under wraps. Despite a Gujarat Information Commission order, the report sought under RTI was for long held back citing national security. "Ultimately, the police will come out blemishless, just wait and see," said a Dalit leader. "Dalits have been facing the music for long and there has hardly been any attempt to address their concerns," said activist Manjula Pradeep.

Meanwhile, Mevani is following in the footsteps of Hardik Patel of the Patidar Anamat Andolan Samiti (PAAS). Between the two, they were responsible for the exit of Anandiben Patel. Mevani has gone on record to state that if Hardik can go to jail for nine months to support the demands of his community, he was ready to spend 27 months behind bars for his.

Waiting in the wings is a third youth leader, Alpesh Thakore, who represents the OBCs. Thakore sprang onto the scene when the Patels began demanding their inclusion in OBC ranks for reservation in government jobs and education. Reassured to some extent after Hardik sought to appease their fears that the Patels were not seeking to cut into their quota, Thakore took the OBC muscle flexing against the previous Patel government via a different route.

He and his organisation threatened to expose the laxity of the police in the implementation of liquor prohibition in Gujarat, which was playing havoc with the youth of their community. They threatened to take on the bootleggers. This forced former CM Anandiben Patel on the backfoot but she could make little headway for graft from bootleggers is the mainstay of the parallel economy of the police in Gujarat.

Thus, it is these three emerging youth leaders who pose the real challenge that the ruling BJP is set to face in Gujarat in the months leading up to the polls.

The three have been reaching out to each other though not in an overt manner. Hardik Patel, who initially spoke only of his community, has been expressing solidarity with the Dalits. Thakore has already made clear his support to the Dalits.

Gujarat is pregnant with possibilities and growing suspense in the days ahead.