'Critical To Keep Up With Trends'

'The amount of database you have is tremendous and what was relevant three-four years ago may not work now. People are generating ideas much faster. That kind of puts pressure on you.' 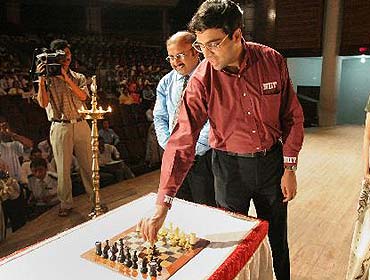 World No 1 and former world champion Anand said it was a lengthy procedure for a sport to be included in the Olympic Games and at the moment he was content with the fact that the sport had been included in the Asian Games.

"I can say I have just a little over zero per cent hope of playing in the Olympics. It takes at least eight years from proposal to acceptance of a sport in the Olympics and I don't see its inclusion in the Games in the near future," he said.

The Madrid-based player made light of talks about the game being affected by changes made to suit the Olympics.

"I think the time-control factor and double rounds in a day are possible. All those who are complaining about it now would agree when they would see the glory associated with it," he said.

"Earlier, rapid chess was also not accepted easily as people said it was bad for the game but today it's very well there," said Anand, known as the 'lightning kid' in his early days.

Anand said his motivation and passion for the game had not diminished an iota since his childhood.

"You think about other alternatives if you do not have desire to play, but I still have burning desire. If sometimes it goes away it comes back in a month or two. I am still as passionate about it as I was in my earlier days.

"The day I will start dreaming about doing something else it would mean I am not fit to or want to play chess with my full mind," he said.

Anand felt the advent of technology was changing chess as it was important for players to keep up with fast-changing trends.

"The amount of database you have is tremendous and what was relevant 3-4 four years ago may not work now. People are generating ideas much faster. That kind of puts pressure on you," Anand said.

"I don't have a favourite opening for more than two weeks now. No one has favourite openings nowadays, players are more opportunist. You need a different preparation keeping up with the trend."

Anand said he was preparing hard for the upcoming World Championships in Mexico.

"I will be playing in Dortmund, Leon and Mainz. Even my colleagues would be doing their preparation," he said.

Anand, only the fourth player ever to cross ELO 2800, said he was very motivated to play in the September 13 to 29 event.

"I am really motivated because there has been no unified title for a best part of last two decades and I had just missed the title in San Luis in 2005.

"We will also be coming together and if you don't take it in Mexico, then there is no second chance for you. So it is really important for me," the 2000 champion said.

Asked who could be the 'next Anand' from the country, he said it would be very difficult to predict although there was a lot of talent.

"It is difficult to say that because you can say someone is doing what (Bobby) Fischer did 40 years ago. But that might not be relevant today. There is a lot of talent but it's hard to judge a prodigy," he said.

"What might look promising to my eyes may not be relevant today. But there is indeed broadening of the base."

On the gap between him and the next best Indian K Sasikiran and others, he said "it depends on if they were getting enough breaks" in the big tournaments and how they were benefitted by them.