Those of us opposed to the war are sometimes accused of anti-Americanism. I am vigorously pro-American, which is one reason I am anti-Bush. They didn't elect him, and they deserve better. 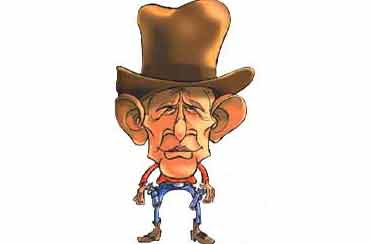 Tony Blair's restless shifting of his justification for war undermines conviction, for standard "lady doth protest too much" reasons. More important is the dangerous paradox that his opportunism must arouse in the mind of Saddam Hussein. When the stated aim was to disarm him, Saddam had only to comply and war would be averted. But if the aim is to save the poor helpless Iraqis from their wicked tyrant, everything changes. Why would anyone disarm on the eve of an inevitable attack? Mr Blair's sudden shift to the moral high ground is presumably a desperate (and it now seems unsuccessful) bid to win over his own party. But has he thought through how it will be viewed in Iraq?

The timing alone indicates that the real reason for war is neither of the two offered by Tony Blair. If it had been, all this would have blown up long ago. It would not have waited until George Bush failed to catch Osama bin Laden in Afghanistan and needed a new foreign adventure to divert his electorate. War would have been a big plank in both Bush's and Blair's election platforms. Gerhard Schröder is the only major leader to have mentioned such a war to his electorate – he was against it – and he consequently has the best, if not the only, claim to a popular mandate. Bush not only failed to mention it in his manifesto. He failed even to get elected.

This is George Bush's war. His motives and his timing have an internal American rationale. Bush is so unswerving in his thirst for war that Saddam has even less incentive to disarm than Blair's paradox would suggest. Cowboy Bush is saying, in effect, "Stick your hands up, drop your weapons, and I'll shoot you anyway."

Bush wants oil and he wants the 2004 election. Unlike Blair's two aims, Bush's two are far from contradictory. An important part of the post-11 September American electorate likes kicking Arab butt, and never mind if a completely different lot of Arabs (who, incidentally, detest the secular Saddam) committed the atrocity. If Bush now wins a quick war, with few American casualties and no draft, he will triumph in the 2004 election. And where will that leave us?

Bush, unelected, has repudiated Kyoto, the Anti-Ballistic Missile Treaty, international trade agreements and environment-friendly initiatives set up by the Clinton administration, and he threatens the UN and Nato. What may we expect of this swaggering lout if an election success actually gives him something to swagger about?

Victory over Iraq will play well in Peoria. It will bomb – literally as well as metaphorically – in the rest of the world. In that post-war climate of seething hostility, are we, in Britain, going to let ourselves be identified, throughout the world, with this uncouth fundamentalist redneck? And are we really going to help him finally to get elected?

Those of us opposed to the war are sometimes accused of anti-Americanism. I am vigorously pro-American, which is one reason I am anti-Bush. They didn't elect him, and they deserve better.

If, in a khaki election, Bush finally wins a term as President, decent Americans, intellectual Americans, American scholars, scientists, philosophers, engineers, writers, artists and, not least, American philanthropists, Americans with a great deal to contribute, are going to be looking for a civilised haven.

English-speaking countries such as Ireland and New Zealand will be well placed to welcome them and benefit from their talented presence. How sad if we rule ourselves out by poodling up to the very leader they will be seeking to escape. As a scientist, I would like to be able to say something like the following to my American friends:

"Dear Colleague: You are a member of the leading scientific nation, by far. No wonder there has been a brain drain from my country to yours. The trickle in the other direction has been, alas, negligible. Occasional attempts, by my own university of Oxford among others, to compete on the open market to recruit leading American professors or promising young scientists, have usually foundered on the problem of salary. But is it possible that things are now beginning to change? Could it be that political developments in your country are now starting to make emigration look more attractive, in spite of the salary differential?

"I know, of course, without even asking, that you were a member of the majority who voted for Al Gore. When your majority in the country, reinforcing your clear majority in the Electoral College but for dead-heated Florida, was reversed by the Supreme Court coup d'état, you must have been saddened, even infuriated. You presumably consoled yourself that it couldn't last more than four years.

"All that has now changed, and you must be close to despair, especially if you happen to be working in a field such as stem cell cloning and find your research blocked by the religious bigotry of this administration, the most anti-intellectual administration in living memory.

"Have things reached the point where you might consider moving? We in Britain may not be able to match your salary, but we can at least offer you a civilised, decent government, very different from the one you are eager to leave behind."

The writer's latest book, A Devil's Chaplain, has just been published by Weidenfeld. This piece was first published by the Independent of London and appears here with the author's explicit permission.