Charges of conspiracy fly around as Nepal crisis deepens

Maoist rebels have rejected the idea that Nepal's royal family was killed by a lovestruck prince, instead pointing to a "grave political conspiracy," it was reported today.

The Katmandu post, an independent English-language daily, carried a statement signed by Prachanda, the president of the underground CPN-maoist party. He called the shootings a "pre-planned massacre" that would bring an end to Nepal's present political system.

"Terming it a family conflict, planned propaganda of both national and international reactionaries and the drama seen while performing the last rites clearly proves that the massacre is result of conspiracy," said Prachanda, who uses only one name.

"To think that king Birendra's patriotic stance and liberal ideology were not the reasons for the royals' death would be big, misleading politics," the statement said.

The maoists rebels, who model themselves after Peru's shining path guerrillas, have been waging a guerrilla war for the past five years in the Himalayan kingdom.

The guerrillas have said they are fighting to end Nepal's constitutional monarchy and dismantle the feudal structure that remains in parts of the country. 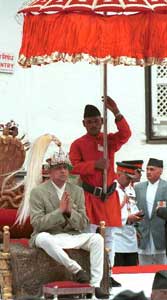 Third King In Four Days & Curfew In The City