'Consistency At The Top Is A Must'

He might be the All-England champion but he is not someone who rests on past laurels. The mantra of his success: to keep performing. 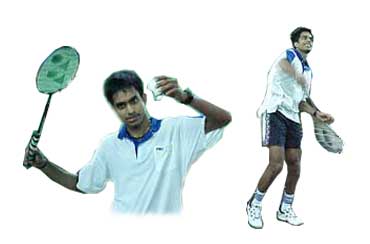 Faith can move mountains, goes the saying. For Pullela Gopi Chand belief in the Almighty does not connote stretching his expectations to the extreme, but helps him put in his best, irrespective of the results. This time around, his best was good enough to land him the All-England Championship title, making him only the second Indian to do so after former coach and mentor Prakash Padukone made headlines in 1980.

Though Gopi claims he "does it for himself and not for the sport", the combined effect of meditation, pranayam and prayer have spilt over to help the ace shuttler "stay calm and think better" on and, more importantly, off the court while waiting for the "system to change" at home. If BAI president V.K.Verma's statement is anything to go by, the mandarins in the Badminton Association of India have taken note of the 27-year-old Hyderabadi's accomplishment and resolved to work with renewed zeal on the current crop of promising players like Abhinn Shyam Gupta, Nikhil Kanetkar, Siddhartha Jain, Ajit Wijetilak and Sachin Ratti.

It was a dream run for the No. 10 seed Gopi at Birmingham as he powered to the title without dropping a game. Asked whether he had suddenly improved as a player, Gopi replied: "All the things in my game came together (this week). I have beaten most of the players at one time or another. I just went from winning one big (match) to two matches and now to a big title." Words of a humble man. Of one who had humbled, during the course of the week, the likes of Olympic champion Ji Xin-Peng of China and world No 1 and top-seed, Dane Peter Gade Christensen.

A "Great Leap Forward" it was for Gopi. The Indian had to miss out last year's action here due to typhoid while 1999 saw him make a first round exit. The previous two years, his run extended to the pre-quarter-final stage. His most "satisfying" All-England win previously was the triumph over Allan Budi Kusuma of Indonesia. From a bits-and-pieces record at badminton's Wimbledon, Gopi suddenly found himself a step away from the crown and immortality. Though not a stranger to the winner's podium by virtue of title wins in Grand Prix events like the Scottish and Toulouse Opens and Asian Satellite Circuit, the prospect of seeing his name alongside former All-England greets would have been an altogether different feeling.

The unassuming product of Nizam's College at Hyderabad did not allow the week's results have a heady effect on him but instead stayed focussed for the summit clash with Chinese Chen Hong. Meditation, even ten minutes before he took to the court, seemed to do little in soothing Gopi's nerves as he lapsed into unforced errors.. But he hung on. Closing his eyes after winning a point and pumping his fist to psyche himself up, Gopi came into his own. Making the Chinese play to his strengths - deception, control and net play, Gopi took the honours. No ambitious display of emotions. Just a simple raise of his hands and a prolonged gaze towards the heavens, thankful he had emulated his role model, "Prakash Sir".

As Steven Badley, a former international and chief executive of the Badminton Association of England, handed over the glittering trophy to Gopi, the cameras captured the Indian's moist eyes. A commoner would have interpreted the tears as those of just a happy man, which Gopi was, despite uttering, "It's a dream and it hasn't sunk in yet." The shuttler was undoubtedly reflecting on the fateful day during the Pune National Games in 1994 when a knee injury threatened to crush the budding player's aspirations after the spark he had displayed by winning the junior Nationals in 1991. It was the expertise of Dr. Ashok Rajagopal that had Gopi back on his feet but the break had left his game rusty. A berth in Prakash Padukone's academy at 22 was like an answer to his prayers and it set the foundation for his future exploits.

Besides acquiring the cutting edge to his game, discipline was another quality the three-year stay at the academy inculcated in Gopi. Said Prakash "Our way of operating is almost like that of National Association. Talent of course is the main factor for selection, but not the only factor. Discipline is also important. The pupils have to listen to us and they have to do as they are told."

The year 1997 proved to be a watermark in his career as Gopi began making a mark in the international arena when he finished runner-up in the Indian Open and SAS Trophy, after upstaging higher ranked players, a phenomenon he has been repeating since then with unfailing regularity. Notwithstanding the odd hiccup, the Sydney Olympics being noteworthy, Gopi has moved up steadily - a career-best world No 6 ranking in February 2001 - but he refuses to rest on past glories. "I still need to work hard. The circuit is so tough that one runs into seeded players from the first round itself. Consistency is a must at the top level."

Confident of his abilities, Gopi took the bold decision of moving out of Prakash's academy one-and-half-years ago and teaming up with Prasad Ganguly at SAI's Southern Centre, also in Bangalore. The move removed his grouse of the lack of a "travelling" coach.. "At the top level the difference isn't much and this (coach) factor makes a difference. Top players have coaches with them who analyse the matches from the sidelines and feed their wards with inputs on their rivals. These days the game is all about power and speed. My attack is good and stroke-wise I can match anyone," were Gopi's words. Working with Ganguly and the emphasis on on-court training translated his utterings into action at Birmingham.

Prasad Ganguly might have been the first to hug Gopi, but the credit of spotting and moulding the player in Gopi goes to national coach S.M.Arif, whose choice was justified as Gopi began creating waves when he was just 15. Alive to the potential Gopi possessed, Arif had dared to predict that his pupil would be a world champion. Today he stands vindicated. Says Arif: "Gopi tends to push himself too hard. At times I had to restrain him." In his bid to reach for the stars, Gopi played in the German and Swedish circuits which "emboldened him while taking on top players". Apart from adding value to his game, Gopi opined about the overseas stints: "Players here (in India) have to take care of their tickets, visa, foreign exchange and have to go hunting for personal sponsors (hard to come by). I played for FC Langenfeld in Germany for three years and felt the difference." It was the contrast which had him hitting out at the media during the Senior Nationals at Jaipur for its "fixation" about cricket and "blacking" out other disciplines.

Not only setting higher goals for himself, Gopi has taken it upon himself to improve the game's lot in the country. And this bore credence when the Sports Ministry, acknowledging his individual bronze and team silver medal in the 1998 Commonwealth Games, placed badminton in Category A of its priority list in sports. Indian badminton never had it so good. Gopi proved his credentials beyond doubt when he guided India to the finals of the Thomas Cup last year after a 12-year gap and claimed his fifth national title on the trot.

With Gopi showing the way, the younger crop, while handicapped by the lack of infrastructure, are definitely not short on inspiration. Says Prakash: "When Gopi won that (final) point it brought back memories of the time when I won. It is a red letter day for Indian badminton. His feat should give the other Indians the confidence that they too can be world beaters. We lack in self-confidence and fail to play to our potential specially abroad."

As the pundits would say in unison, there are greater laurels in store for Gopi. For "faith in God" has taught the simpleton from Nagandla village in the Prakasam district of Andhra Pradesh to perform his karma and leave the rest to the Almighty.