Consequences Of Dancing With Uncle Sam 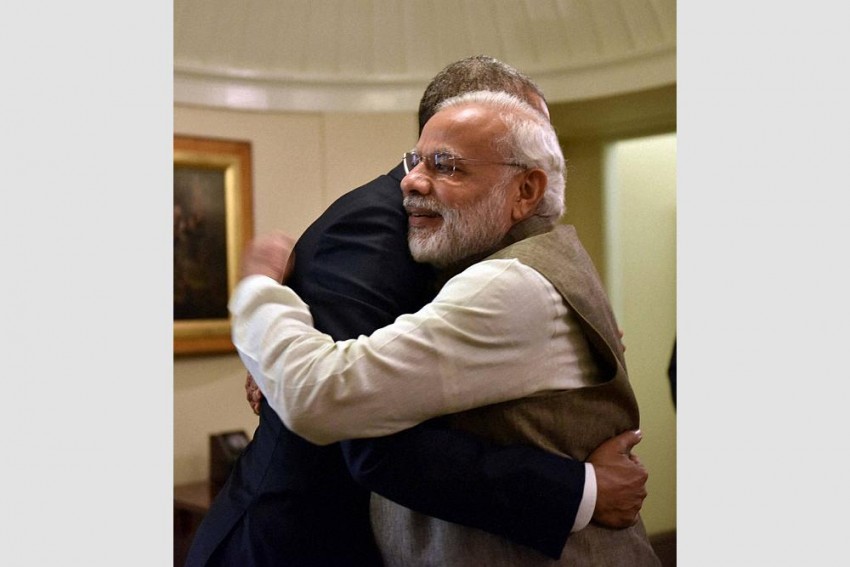 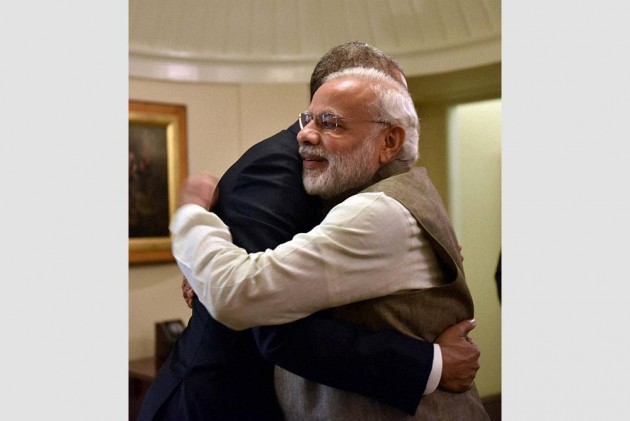 An Indian Prime Minister paying homage to America’s fallen soldiers at the Arlington National Cemetery is probably the most iconic image of Modi’s latest visit to the US. Since the 1920s, Indian leaders have espoused their antipathy to military interventions and imperial adventures. “Slaves ourselves”, Nehru wrote in 1927, “it has been our degrading function to help in the enslavement of others for the benefit of a third party.” This wasn’t just an emotional belief. Indian sepoys had formed the sinews of British power projection across Asia and Africa for decades until London’s sudden departure from the subcontinent in 1947.

In his Discovery of India, Nehru had noted how “Indian troops had been used as mercenaries” for “imperialist purposes” in “Burma, China, Iran…Middle East, and…Africa”, making them “symbols of British imperialism” across Asia. The conviction that India would never again play such an enabling frontline role to fuel and sustain the ambitions of another great power became engrained in our post-colonial belief system. This core belief persisted even beyond the post-Cold War era. It was first challenged quite dramatically in 2003 when the Vajpayee government came within a whisker of replaying the traditional sepoy role, this time to America’s invasion of Iraq. Ultimately, Delhi chose to adhere to its core beliefs: India would not deploy its boots to fight another country’s war. The symbolism of Modi laying a wreath at Arlington appears to reflect a turning point where past shibboleths are no longer deemed appropriate for India’s position in the world.

Modi’s ambitious quest to transform the Indo-US relationship will reverberate across the international system. It will also change India and its role – both in her own region and in Asia. The rhetoric of the joint statement leaves little doubt about Indian preferences: “The leaders affirmed the increasing convergence in their strategic perspectives and emphasized the need to remain closely invested in each other’s security and prosperity.” Both leaders also “resolved that the United States and India should look to each other as priority partners in the Asia-Pacific and the Indian Ocean region.” While it is perhaps premature to predict how this shared vision will actually play out, the critical question is, what are the possible geopolitical consequences of this dramatic shift in India’s foreign policy?

Although Indian policymakers might prefer prioritizing the bilateral dimensions while letting wider Indo-US security cooperation to develop in a more open-ended and fluid manner, external actors will start formulating their geostrategies on the premise that a tighter Indo-US alignment is the course now preferred by Delhi and Washington. Mere reassurance of India’s strategic independence if unaccompanied by credible actions will not impress important external actors as they pursue their interests. Let’s conjecture on the possible dynamics and realignments that might get triggered in the default scenario of a tighter Indo-US strategic equation.

China’s hedging is no longer a hypothesis. It is already in geopolitical play. The much-touted China Pakistan Economic Corridor project – a multi billion dollar bet on inserting industrial muscle into what has been from the outset a free-riding client state – exemplifies Beijing’s hedging in practice. Regardless of its ultimate scale or success, Beijing has signaled a degree of commitment to Pakistan’s political economy and security that was previously never materially possible or even part of China’s South Asia calculus.

It is not unrealistic to also project a higher scale of conventional military assistance to Pakistan, including its sea power, without China entrapping itself into a frontal collision with India. Such a policy response by Beijing would further shore up Rawalpindi’s preponderance in the domestic political and economic structure. Such an evolving game, however, has an ironical twist that should not elude Indian policymakers. If China’s main geopolitical counter to India’s now declared policy of a China-centric alignment with America is to deepen ties with Rawalpindi and the Pakistani state, Delhi would naturally be interested in blocking or undermining such an outcome. It would be logical to also cooperate with Washington in this task of deflecting Chinese power in South Asia. But here is where a counter-intuitive quadrilateral dynamic kicks in, largely at the cost of India.

The core question Indian policymakers have to address is whether America can really help in deflecting Chinese power in South Asia? After all, if a balance of power strategy is driving Indian choices then it ought to buttress Indian security interests and aspirations in its core zone of Southern Asia rather than in the distant seas of the Western Pacific. But the configuration of alignments and intersecting interests in South Asia suggests that this is unlikely to ensue.

Historically, the notion of an area of agreement between America and China when it comes to the basic position of Pakistan in the sub-regional order and stability of the Army-dominated political structure inside Pakistan is well known. US analysts and former officials have often welcomed the idea of China sharing the burden of sustaining Pakistan as it is configured today. Beijing too recognises this tacit convergence with Washington. What we can expect is that Washington would pursue policies to avoid losing its influence over the Pakistan Army to China.

Pakistan’s strategic utility for Washington both as a source of leverage in the latter’s  India policy, a curiously underappreciated point in India’s strategic community, and, as part of providing strategic depth and potential boots to buttress America’s alliance commitments to several Arab monarchies would outweigh any argument of seeing a truly democratized Pakistan or a weakened Pakistan. The new variable of a Russia-Iran-Syria challenge to US interests in West Asia probably only reinforces Pakistan’s supporting role in the Pentagon’s contingency plans.

Quite extraordinarily then, the likely Chinese counter to India’s ambitious quest to craft a security partnership with America would not only go unchallenged but might actually accelerate a process whereby the total quantum of economic and military assistance to Pakistan increases. To manage such a trend, Washington might even find it advantageous to simply reassure Beijing that the US will not undermine Chinese core interests in South Asia, an outcome that again punctures India’s balance of power strategy.

Russia has traditionally – that is since the late 1940s – viewed an independent and strong India as a key to a stable Asian and Eurasian order. Let us not forget that Stalin’s first dramatic outreach towards India occurred in January 1950 when the Soviet leader had welcomed a friendship pact in a conversation with then Ambassador Radhakrishnan. The context was instructive: Mao Zedong was present in Moscow during this time negotiating a treaty with its most significant benefactor in the Chinese revolution. Indian archives reveal that Delhi had been impressed and surprised by this encounter between Stalin and Radhakrishnan, even if Nehru did little to tap the geopolitical potential at that stage of the Cold War.

Even today, for Moscow, Delhi is viewed through a Kautilyan prism of being China’s largest southern neighbour, a prism that conditioned Moscow’s India policy through the Cold War period. Qualitatively, it is well recognised that India – even now – receives more high-tech military platforms and capabilities compared to Russian arms sales to China.

Would a change in Indian foreign policy alter this core Russian image of India and precipitate an adjustment in its wider Asian policies? There is no doubt that the Kremlin will adapt both its bilateral and wider postures. While the bilateral military-technical dimension, given its profitability and other advantages, might not be reversed quite so dramatically, the role expected of India as an independent Asian actor and potential pole in a multipolar Asia would most certainly be re-assessed.

The big shift will probably occur on the Russia-China front, calibrated to evolve in a measured fashion as the full extent of the Indo-US equation as it relates to India’s role in the extended neighbourhood of East and West Asia becomes more evident. The recent expansion of Russian strategic influence in West Asia after its Syrian intervention, which involves a mutuality of overlapping interests and collaboration with a rising Iran would also be a factor in the Kremlin’s perception of India.

The widely shared Indian belief of Russia’s diminishing strategic relevance to global and regional balances is so contrary to reality that it is on this front where Delhi might confront the most sophisticated response to a hard Indo-US alignment. To be sure, the two dyads of Russia-Iran and Russia-China have their own regional, and, for the latter global rationale too. But these dyads have hitherto not really impinged on Indian interests or on Delhi’s ability to pursue geopolitical goals in West and East Asia.

It should be utterly obvious that the North-South corridor and the extension of an Indian line of communication into Afghanistan and further beyond into Eurasia is dependent on how Tehran and Moscow perceive India’s evolving foreign policy role in the larger neighbourhood. Similarly, the Russia-China-India triangular equation whether in its manifestation in BRICS, the SCO or in the hard military realities in the Indo-Pacific space have provided India with opportunities to pursue alternative non-western order building institutions and opportunities for geostrategic hedging in the scenario of a subcontinental crisis.

It has also provided India with a trusted partner in the Eurasian heartland with generally shared concerns about the future spillover of Chinese power into the Russian and Indian peripheries. While deft diplomacy might stave off an adverse hedging process that impels Moscow to swing towards a ‘China-first’ Asia policy, India’s bargaining position and options on various Eurasian issues will almost certainly diminish in inverse proportion to the perceived strength of an Indo-US military alignment.

As I have discussed previously, the basic quest to anchor India around the sole surviving superpower after 1991 has been a bipartisan endeavor. It took a new turn after 1998 and its ideational roots grew deeper under UPA 1. After an interlude of circumspection and second-guessing the nature of the post-crisis world system, Modi and his advisors quickly decided, for reasons that are still not fully apparent, to double down on a pattern of choices that had been developing since the 1990s. What should henceforth concern Delhi are both the efficacy and the internal legitimacy of this foreign policy choice.

While internal political trends appear unlikely to offer a sophisticated alternative to the present policy path (although India’s civilizational identity would constrain both the pace and nature of the Indo-US security partnership that develops), the changing external environment is where the main consequences of Indian choices will be felt. If not anticipated and wisely handled through complex statecraft, Modi’s ambitious US policy could cost India far more than the status gains that are expected to accrue from bandwagoning with America.