Modi's prime ministerial candidature remains the unquantified factor with a pull all its own in Gujarat. 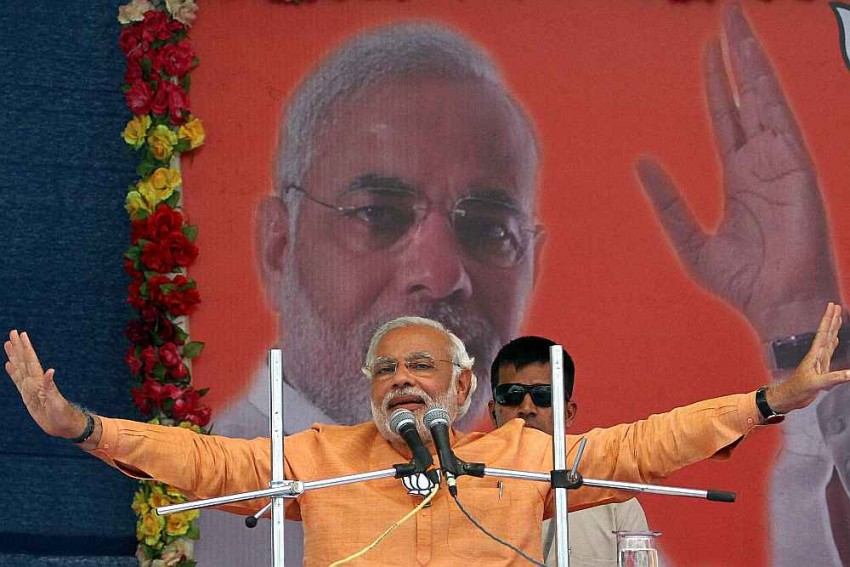 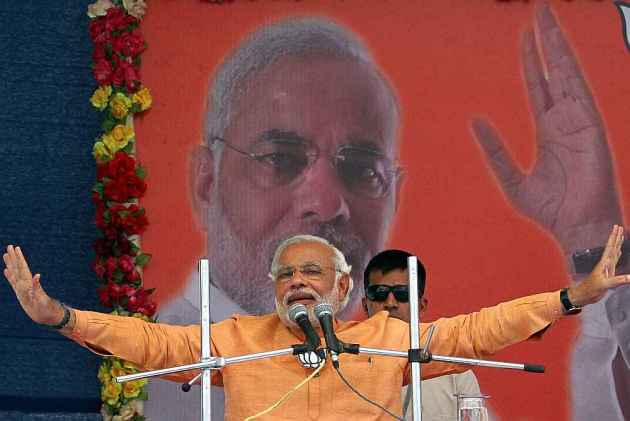 Polls are a good time for flights of fancy. Not so for Narendra Modi, the prime ministerial probable who has turned an absentee chief minister in his quest to become the CEO of India. From strategic shifts to body feints and scoop and volleys, he plans it all.

Within hours of his 2012 Gujarat Vidhan Sabha victory, Modi told a thanksgiving meeting of his party leaders in Ahmedabad that their next job awaited them, a clean sweep of all the 26 Lok Sabha seats in Gujarat. "Get to work," he told them even as the Congress sat licking its wounds, topping up a quarter century of poll drubbings in Gujarat.

And that has been the constant refrain, dinned into the saffron rank and file over the last two years. "The future prime minister's home state must gift a befitting present, nothing better than all 26 seats", points out party president R.Fardu.

"Easier said than done," counters Shankersinh Vaghela, leader of the Congress in the Vidhan Sabha who gives his party 16 seats in Gujarat. The truth lies somewhere in between. The best case scenario for the Congress is 8 seats against the 11 they held last time and the worst case is 4 seats. "We are alert," adds Vaghela.

Modi's one time pal turned bitter political foe should know better. He was defeated in the last 2009 Lok Sabha elections, contesting from Godhra. It was an elementary trick. Two Muslim independents together weaned away 33,000 minority community votes and Vaghela lost by 2081 votes. A specimen of simple planning attributed to Modi and his close confidante Amit Shah now handling Uttar Pradesh for him. A glimpse of this planning comes from the 67 Muslim candidates contesting either as independents or small, insignificant party candidates this Lok Sabha elections in Gujarat. They constitute 19.76 per cent of the 157 independents in a total of 334 candidates contesting in Gujarat.

Kalim Sheikh, the independent who contested against Vaghela, in 2009 is in the fray again this year from Godhra to the detriment of milk cooperatives leader Ramsinh Parmar who is the Congress candidate. Kalim's brother Arif is opposing Vaghela as a Samajwadi party candidate with the same motive. Vaghela has already moved for scrapping Arif"s candidature since he is a voter both in his native MP as well as in Ahmedabad.

Though the BJP has not put up a single Muslim candidate and the Congress only one in Navasri, Maksud Mirza, yet it is common knowledge that the Muslim candidates in the fray are there only to hurt the Congress prospects. "It is a BJP gameplan to divide Muslim votes," points out Gyasuddin Sheikh.

With Muslim candidates in the fray in Kheda, Bharuch, Jamnagar (11 candidates), Junagadh, Anand and Sabarkantha, all key Congress constituencies, a clear pattern seems visible. Interestingly, there are no independents contesting against chief minister Narendra Modi in Vadodara.

Old associates of the man who has risen to a point where he has his onetime mentor, BJP patriarch L.K.Advani as a poor laggard, attribute his success to stealth, secrecy and mercenary, self-centred decision making. His choice of Vadodara stands out as a classic case. Very few knew of it though he had handpicked and put key officers in place in the administration there over months including shifting his key minister Saurabh Patel from Saurashtra to Vadodara in the 2012 Vidhan Sabha elections. Despite a high profile Congress candidate Madhusudan Mistry opposing him, Modi is expected to romp home for the city is a safe seat for the BJP.

So will arch rival Shankersinh Vaghela in Sabarkantha, though reluctant warrior, union minister Dinsha Patel is having a tough time in Kheda. L.K. Advani too will come through though with a reduced margin because the BJPs own state leadership had queered the pitch against him in the run up to the polls.

Ironically, Modi who is crusading through the countryside for a Congress-free India in 2014 has ensured a Congress 'yukt' BJP in Gujarat. At least 16 of the total 26 Lok Sabha candidates put up by his party in the state have come from the Congress and includes many who joined recently. Even in the matter of the seven Vidhan Sabha by-election seats which go to polls along with the Lok Sabha in Gujarat on April 30, the BJP has put up four ex-Congressmen. This has led to turmoil within the saffron-fold in Gujarat.

In South Gujarat, the BJP candidate contesting the Bardoli seat, Prabhu Vasava is a politician of Congress lineage. He has been twice elected as a Congress candidate from the Mandvi Vidhan Sabha seat and his father Nagar Vasava was a five times elected Congress legislator. Prabhu opposes union minister Tushar Chaudhary, son of former Congress chief minister Amarsinh Chaudhary.

In Valsad, BJP man K.C. Patel had been with the Congress since 1999 but joined the BJP in 2004. His wife elected to the district panchayat on a Congress ticket was a chairman of its standing panel.

Then there is Vithal Radadiya who was the Congress MP from Porbandar. Radadiya and his son Jayesh had contested the Vidhan Sabha seat from Dhoraji and Jetpur respectively on a Congress ticket and won. Denied the post of leader of the Congress opposition, Vithal and his son both switched over to the BJP. He subsequently quit as Congress MP and was re-elected on a BJP ticket. With 10 criminal cases against him, he is in the fray again. With the seat going to the NCP, it is Kandhal Jadeja son of Porbandar don Sarman Munjha and 'Godmother' Santokben Jadeja who takes him on. Modi fights for a criminal free political order while two candidates with a brazen criminal record are locked in poll combat for the right to represent Mahatma Gandhi's birthplace.

In Jamnagar, the BJP candidate this time, Poonam Madam was general secretary of the Youth Congress till late 2012 when she switched sides and contested the Vidhan Sabha from Khambhaliya on a BJP ticket in 2012 and won. She is Modi's candidate against her own uncle Vikram Madam who is the sitting Congress MP.

Also in Surendranagar constituency of Saurashtra region, the BJP candidate Devji Fatepura was the Congress legislator from Halvad constituency. He joined the BJP recently and is contesting against sitting Congress MP Soma Patel.

Liladhar Vaghela, a minister in the Modi government is the BJP candidate from Patan in north Gujarat. A Congress leader, he quit to join the Janata Dal in 1985 and thereon moved on to the Congress. He joined the BJP in 1995. Devusinh Chauhan, the BJP candidate from Kheda was pitted against union minister Dinsha Patel of the Congress in 2009 but lost. He was general secretary of the Congress till 2002 and subsequently quit on being denied a ticket to contest from Matar Vidhan Sabha constituency subsequently.

Prabhatsinh Chauhan was a Congress legislator who joined the BJP on being denied a ticket in 1990. He was also a minister in the Modi government .He defeated Congress leader and former union textile minister Shankersinh Vaghela in the last Lok Sabha elections from Godhra. He is the BJP candidate from Panchmahal.

The BJP candidate from Chotta Udaipur, Ramsinh Rathwa, has been a two term Congress MP during 1985-97. Defeated on the BJP ticket in two successive Lok Sabha elections, he however won the third time defeating Congress candidate Naran Rathwa in 2009 and battles him again this time.

The BJP candidate in Kutch, Vindo Chavda comes from Youth Congress lineage and was handpicked by Modi in 2010 to join the BJP. The BJP sitting MP from Ahmedabad (West) Kirit Solanki is also an old Congress hand.

The BJP sits smug in Gujarat with Modi who senses blood, carpet bombing the country in a very high profile poll campaign. The cadres hope that his last few days of campaigning in the state will put the party close to its target.

"With Modi busy in bigger pursuits, the BJP has a fight on its hands in Gujarat," counters Dr Manish Doshi, the state Congress spokesperson. The fact of the matter is that Congress, fighting with its back to the wall, seems to have put its divisions behind it for the moment, though Modi remains the single biggest game changer in the run up to polling day, April 30.

For the Congress hope lies in its sitting MPs who have defied the Modi onslaught both in 2004 and 2009. In the final reckoning, BJP 18 to 20 seats, Congress 6 to 8 with the swing accounting for the two in a total of 26 seats.

Modi's prime ministerial candidature, however, remains the unquantified factor with a pull all its own in Gujarat.