'Congress Is The Lesser Evil'

'The BJP has used religion as a card and Gujarat as a laboratory' and 'Sonia Gandhi's roots are in Italy', says the NCP leader in a wide-ranging interview discussing NCP's prospects. 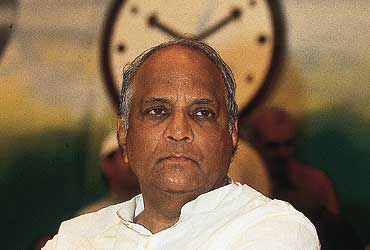 Once projected as a serious prime ministerial contender, Nationalist Congress Party (NCP) chief Sharad Pawar seems to be struggling for space in the corridors of power in New Delhi. Formed three years ago after Pawar's expulsion from the Congress for reviling Sonia Gandhi as a foreigner, the NCP hasn't made much of a splash on the national stage. Given his reputation for switching sides, it's anyone's guess what the inscrutable politician's game-plan is. But his recent overtures towards the Congress have fuelled speculation on whether he is trying to return to the party which is now on the ascendant. Excerpts from an interview where he talks about the NCP's prospects, the Congress and Sonia Gandhi.

You had announced that you were ready to ally with the Congress in Gujarat but the Congress flatly refused by saying that the NCP has no base there. How do you respond to this snub?

They are welcome to their point of view based on their assessment of the situation. We were ready to ally with them although we have honest differences because we are keen to reduce the chances of the BJP. If the Congress does not share this view, they are welcome to differ. Finally, the results will tell.

Why did the NCP decide to fight elections in Gujarat and how well do you expect to perform?

The NCP is only three years old and it is not possible for us to have a presence in all states in such a short time. We have concentrated mainly on Maharashtra and the Northeast. Now we want to expand our base in in Gujarat, Madhya Pradesh, Chhatisgarh and Goa. But the main reason why we have chosen to contest in Gujarat is because in the larger interests of the nation, one must work to defeat the BJP.

The way Narendra Modi's govenrment has handled the situation has brought discredit to the entire nation. The communal riots were allowed to go on for so many months. Gujarat's economy has been practically destroyed. The BJP has used religion as a card and Gujarat as a laboratory. If they succeed, they will use this card in other states and the integrity of the country will be affected.

But we do not want to split the secular vote, so we will be contesting only a limited number of seats from areas where the Congress doesn't have a base, for instance from Saurashtra and the Panchmahals area. But we feel positive about winning the seats we are contesting.

This is the second time in recent months that said you wanted to tie up with the Congress to fight communal forces. Are you really trying to say that you want to return to the Congress?

There is no question of a return to the Congress. I want to continue to build the NCP. I sincerely feel that the Congress is also responsible along with the BJP for the situation country is facing. But it is the lesser evil.

At one time, the Congress was known as a party that fought for the freedom of the country, and stood for secularism and democracy. It had a leadership which was concerned about the future of the nation. But that is the past of the Congress. It is a pity that today that party can no longer understand the pulse of the people.

A party that fought against foreign rule now wants to hand over the nation to someone of foreign origin. By projecting Mrs Sonia Gandhi as a prime ministerial candidate, the Congress is ignoring the wishes of more than 100 million people. It wants to hand over the nation to someone who is not emotionally involved with the masses. The country's future is not safe in the hands of the Congress. When we raised this issue, we were expelled from the Congress and we continue with our view.

The question of Sonia Gandhi's Indian citizenship has been settled by the supreme court. Can the NCP still use this as its main issue?

The Congress used technical grounds to argue in the supreme court. We accept that Mrs.Gandhi is an Indian national and that she has the right to contest elections and to sit in the parliament. We have no objection to her becoming the leader of the Congress party but we object to her being projected as the prime ministerial candidate. We object to handing over the fate of 100 million people to someone of foreign origin. Tomorrow, if I settle down in California and there is an earthquake in Latur, I will naturally rush there. I will not be so concerned if something happens in California. Mrs Gandhi's roots are in Italy. I don't blame her. It is the human psyche.

If you want to "keep communal forces out of power", does this mean that the NCP will not ally with the BJP in the future?

No we will not. Even today we have not tied up with the BJP irrespective of our fight with the Congress. The policies of the BJP are weakening Indian society.

The NCP is increasingly being seen as a party with no real future. Are you satisfied with the performance of the party?

The NCP is only three years old and you cannot expect us to have a presence in every state in the country. Other parties like the BJP and the Janata Dal have had decades to build themselves. The Congress has grown over several generations. In Maharashtra, people thought we would hardly in any seats, but we ended up forming the coalition government and as I said, we are now trying to expand our base. The NCP is focusing on creating a positive atmosphere for the younger generation and undertaking developmental work.

As a keen promoter of the Enron project, do you think the Dabhol Power Corporation can be salvaged and should it be salvaged?

Unfortunately, the media and political parties have always looked at this project from a different angle. They should look at the situation in Maharashtra. Once it was a power surplus state, capable of supplying power to other states. But now, there is a huge shortfall and since 1995, there has not been a single new power project. The government is buying power from GOI projects at the rate of Rs 3.20 a unit. So, if power can be purchased from DPC at Rs 2.80 per unit, what is wrong with taking it? Look at the condition of MSEB (the state electricity board) and the losses it is making.

But wasn't the Enron project largely responsible for the ruin of MSEB?

During the Shiv Sena-BJP's attempt to pull down the Democratic Front in Maharashtra, why did they mainly target the NCP for defectors? Isn't there a lot of internal discontent in the party?

The Sena-BJP also targeted the Congress, not just the NCP. Basically, the defectors were not unhappy with the party, but they were unhappy with certain state government leaders who, they felt, were not protecting their interests. We have addressed this issue but there is no question of larger discontentment within the party.

The multicrore cooperative bank scam in Maharashtra involved prominent NCP leaders. Hasn't this tarnished the image of the party?

There are more than 300 cooperative banks in Maharashtra and a substantial number of them are controlled by the NCP. The scam involved just a few banks and we have also taken a stand against those leaders involved in wrongdoings. We don't feel that it has affected the party's image. In fact, Wardha cooperaive bank was accused of being involved in the scam but in the recent elections, the bank's entire board was elected from the NCP.

Earlier the NCP was overtly supportive of Vilasrao Deshmukh as chief minister of Maharashtra but in the recent attempt to topple him, your party did not come out in his support. Does this mean that the NCP is no longer keen on him as CM?