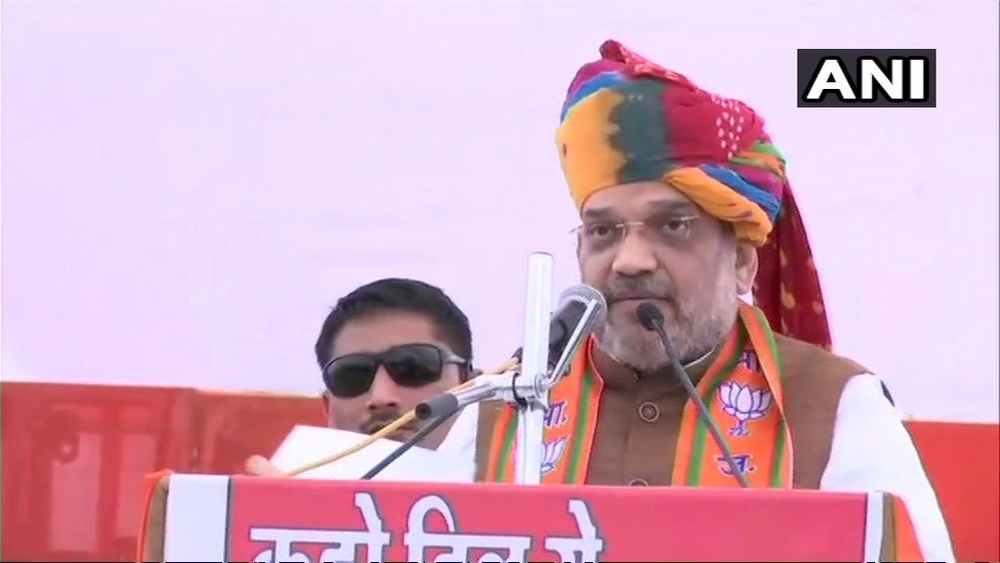 BJP chief Amit Shah on Monday claimed that the Congress party does not have a leader as the party has not declared the chief ministerial candidate in Rajasthan.

“I have been repeatedly asking Rahul Gandhi to name the leader of his party...But he doesn't say anything," said Shah.

BJP President Amit Shah in Sawai Madhopur: Rahul Gandhi is taking the name of Modi ji more than we in BJP take, we don't understand if he is campaigning for Congress or for the BJP #RajasthanElections2018 pic.twitter.com/jeBpn6qncC

He accused the Congress of playing with the security of the country for vote bank politics.

People in the Congress see politics in surgical strikes and they stand in support of intruders in the country, he charged.

BJP President Amit Shah in Chittorgarh: When it was Manmohan Singh & Sonia Gandhi’s govt in Rajasthan, what did #Rajasthan get?It got Rs.1,09,242 cr in 13th Finance Commission.BJP govt worked to increase it to Rs.2,63,580 cr for Rajasthan.And they are asking us what have we done? pic.twitter.com/6YSqyaxIGH

The Narendra Modi-led BJP government has worked to make the country secure, he added.

He hailed development works and public welfare schemes implemented by the Vasundhara Raje government in the state.

“Today, BJP's saffron flag is fluttering with pride on 70 percent of the country's land area,” he said.

Shah said that BJP was like "Angad's foot" in Rajasthan which nobody can dislodge.

According to the Ramayana, Angad was a monkey prince who planted his foot in demon king Ravana's fortress Lanka. No one, including Ravana, was able to move his foot.

Electioneering will conclude on December 5 and counting of votes will be taken up on December 11.

From Where Have You Got Your Knowledge On Hinduism, PM Modi Asks Rahul Gandhi