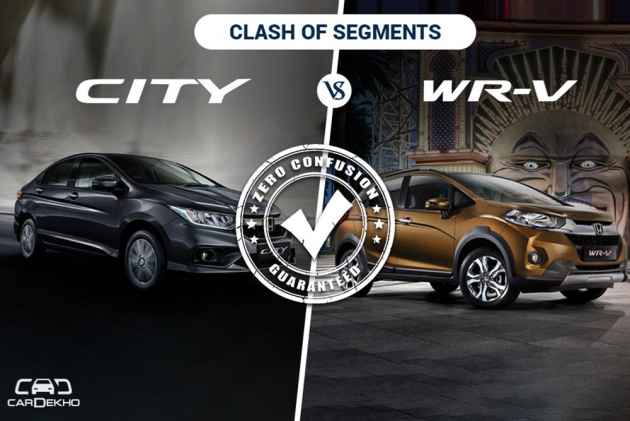 Everyone knows the Honda City and WR-V are not natural rivals. The former is a conventional three-box sedan while the latter is essentially a jacked-up hatchback with some cosmetic enhancements to make it look rugged. What’s common is that they are both Hondas and share their diesel engine, but there’s only one petrol variant of each of these cars that’s priced so close that some buyers might want to compare the two.

And that’s what we’ve just done. But before we compare the closely priced variants, here are some of the basic differences between these two cars: The Honda WR-V’s top VX variant with the petrol engine is priced at Rs 9 lakh. We’ve compared this variant with the base S variant of the petrol-powered Honda City, which is priced at Rs 8.71 lakh. While the WR-V VX is also available with a diesel engine, priced at Rs 9.99 lakh (ex-showroom Delhi), Honda doesn’t offer the base S variant of the City with the diesel engine. As a result, the price difference between the most affordable diesel Honda City SV and the most expensive diesel WR-V VX is Rs 1 lakh. Being the top-spec model, the WR-V VX is clearly more feature-loaded than the City S. Where the WR-V is packed with comfort features such as automatic climate control, rear parking camera with sensors, power-foldable ORVMs and telescopic-adjustable steering wheel, the City S ticks just the basics like an audio system, manual AC, power windows, tilt-adjustable steering and electrically adjustable ORVMs. However, both cars are equally equipped when it comes to safety and get dual front airbags and ABS with EBD. The City gets ISOFIX child seat anchors as well. Features like sunroof, touchscreen infotainment system, chrome door handles and alloy wheels add to the feel-good factor of the WR-V. All these are missing in the base variant of the City.

Why buy the City?

Why buy the WR-V?

Before we end this comparison, here’s a look at the specifications of both these cars