Appreciating Assemun: Not a quaint cultural artefact but a potent metaphor for our times. 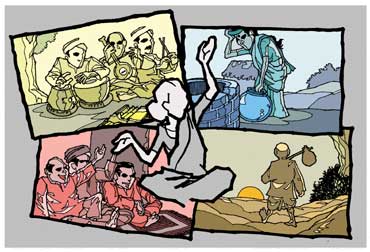 Tanik hum se bol batiya le
(Come, talk to me a while.)

Dateline Dhingvas. A barren, 40-house village in Pratapgarh district, U.P. Listen as Aseemun Nishan, five feet tall, frail and eighty three, sits in the courtyard of her crumbling house and tells you all about her life. It is the story of a mirasan - a folk singer who entertained two generations of royalty and gentry. It is also the story of her music, of songs that tell a thousand stories themselves, the kind that can only be born when different worlds and different lives mesh deeply, tightly, to create something beautiful, something larger than anything that made it. I hear her and see glimpses of the world that created and nourished her, a world I want to believe in desperately so that the madness I live in doesn't seem normal, doesn't seem all right, desirable, inevitable. Her story then; mapped through memories - her own and others, read by my flickering vision.

Aseemun's mother was a singer with a well-established reputation amongst the local elite, performing for nobility as far off as Jaipur and Jodhpur. Badam's daughter Chuhara started accompanying her to performances from childhood - started singing with her and learnt the traditional and folk tunes her mother sang.

Hamare Abba bahut maulvi type ke aadmi the. Raat bhar namaaz parhte the...ghar nahin aate the. Kehte the yeh sab kya karti ho, hamare haath ka khana nahin khate the.
(My father was a religious/maulvi-type man. He would pray all night and refuse to come home. He objected to our singing and wouldn't eat the food we served.)

Her maulvi father gave her the name Aseemun Nishan. Perhaps he disliked the neutral, could-be-anyone tone of Chuhara. Or perhaps he was trying to resist the legacy or `miras' it carried. If so, he failed spectacularly. The name stuck, and so did the music. When Aseemun urf Chuhara turned eight her mother decided she would learn classical music-pakka gaana - from a `master'. Despite her husband's protests, she took Chuhara to nearby Maihar, to Baba Alauddin Khan.

Baba is one of the legends of Indian music. One of his singular contributions was the creation of an orchestra at Maihar, drawing his artists from the population of the village. In this atmosphere of blurring boundaries and opening up of hitherto pure arenas, Aseemun learnt to sing her raag ragini. She also learnt several of Baba's compositions, which she still sings the way he taught her. Her companions during the years she studied with Baba were his children, Ali Akbar Khan and Annapurna.

Shaadi-biyah main bulave, Holi main Dussehra main bulave, Janamdin - yeh badde hota hai na, usme. Janeu, mundan main jaate then. Jab bulate the tabhi jaate then, bina bulae nahin gaye.
(They would call me for weddings, on Holi and Dussehra and birthdays. I would go for the thread ceremony and the hair cutting ceremony. But I would only go when I was called. I never went uninvited.)

Aseemun was part of the cultural milieu of Awadh, which flourished in its qasbas (settlements) under the patronage of local rulers and zamindars. Her job was that of a private entertainer, who was summoned on festive occasions from her Dhingvas home to sing and perform the rituals associated with the event. Hindu rituals, Muslim events - it made no difference, Aseemun knew the songs.

My grandfather told me about the first time he heard Aseemun sing. It was over fifty years ago at a cousin's wedding. He couldn't believe the range of her repertoire. She knew songs for every conceivable occasion. She knew folk songs and classical compositions. She sang in Urdu, Awadhi, Farsi and Sanskrit.

But it's not about a Muslim singer knowing a lot of Bhajans, he explained to me. Its not even about an illiterate village singer reciting classic Persian and Sanskrit compositions. Its about the milieu which made it possible for her to sing a bhajan in praise of Krishna and a naat in praise of the Prophet with equal naturalness and appreciation.

Allah mian, humre bhaiya ko diyo nandlal, sings Aseemun, in a `sohar' to celebrate the birth of a child. Allah, give my brother a nandlal.

Nandlal; Krishna; a son. Concepts travel, are changed and a reused in different contexts - poetically, beautifully. It is this holism that Aseemun embodies, this breathing integration she articulates in her music.

Sufi mysticism or tasawwuf also influenced Aseemun's music in a fundamental way. Her pir (teacher) was Shah Naeem Ata of Salon, a scholar and music lover. The Chishti school of thought to which `Mian' belonged laid great stress on music as a means of union with the Divine. His khanqah thus served as a center for all the musicians of the area, who came and performed before the pir and sought his approval.

Mian hamara gaana zaroor sunte the, chahe koi kahin se bhi aaye. Unhe bhajan bahut pasand the.
(Mian always listened to my singing no matter who else was waiting to perform for him. He was very fond of bhajans.)

Naeem Ata was also a composer who wrote in Urdu, Hindi and Persian. The bulk of his compositions however are in Awadhi - part of a conscious attempt to integrate with the lives of the people and speak to them in their own language.

Bhar le paani sughar pani hari. bhar le paani.
Ab hain savera, kuan hai akela.
Phir na jaana bharan ko ri havri.
(Come, fill your vessels with water. It is daybreak and the well is not crowded. Do not lament later when it is too late oh foolish one.)

This transposing of sufi concepts to Awadhi went deeper than a change in words alone. It also involved the use of popular imagery, of the symbols that were part of the cultural lives of the people to communicate spiritual meaning. The panghat is associated with Krishna and his gopis. Mian used the image imbued with a deep mysticism.

Mehdi gagaaria utaro Naeem ki. Tu na utare to koi na utari.
Mehdi (his father and pir) help Naeem lighten his burden. If you won't there is no one else who can.

Aseemun learnt his compositions and performed them in a manner that met with his approval. She still sings them in the same manner - a living repository of Mian's songs and tunes.

Because of her powerful voice and varied repertoire, Aseemun was invited by most of the wealthy households in the area. As her reputation spread she traveled to further off courts and zamindaris.

She acquired a good amount of wealth through these performances, in the form of rich saris, gold and silver coins, brass utensils and jewellery, which the ranis gave to her. She used to carry her jewels in a little pouch she hung around her neck, but kept dropping it everywhere. So she decided the safer option was to of bury all her wealth in her house. She was robbed soon after that.

Ab raaj riyasat khatam ho gayi ab kaun izzat karne waala hai.
(Now the days of royalty are done, there is no one left to respect art any more.)

With the abolition of zamindari and in the complete absence of state patronage, Aseemun entered a spiral of impoverishment and unemployment. That's how I found her, sharing her one room hut with her adopted son Dulare and his brood of children. The other son Hariyale lives next door with his family. None of the children are interested in music, although one of them plays the casio with the village band. This is unmistakably the fading. But not the end.

Even today, when she receives a summons from one of her old retainers, Aseemun goes to their house. There she nurses her voice with warm milk and sings. All her old songs that she has been singing all her life, but which seem so much more beautiful, more relevant and more remote now than ever before.

The delicious eclecticism that flows through Aseemun's songs is what elevates her from being a quaint cultural artefact to a potent metaphor for our times. The ease with which she straddles different musical and cultural spaces rubbishes the fascist style understanding of Indianess that is current in my world, today. Her music, her life - her very existence is living proof of the project of cultural exchange we are being taught never existed. Purity, separateness, exclusion - these are notions that are swept away effortlessly in the pulsating beat of her music.

Aseemun never had a student and her recordings are mostly with private individuals. On her only trip to Delhi she recorded seven hours of singing for the Sangeet Natak Academy. These spools are buried in their archives. It is very likely that her songs will die with her. Will the world that created them, created Aseemun herself, survive? In obscurity, nurtured all over the countryside by other artists, other songs? It can. It may not be a perfrect world, but I see glimpses of things worth fighting for, worth believing in. It must.

(Leave when day breaks, raja; leave then, babu.
Come, sit and talk to me a while.)