Alleged rape of a starlet, a society suicide, prime-time news lead, naturally. It's unlikely that most of those who tearfully watched the coverage of Nafisa's passing will know of Gunnala Narayana or his son Gunnala Kumar. 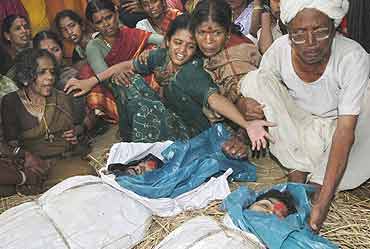 outlookindia.com
-0001-11-30T00:00:00+05:53
For much of the electronic media that panders to middle-class, metropolitan India’s prurient interest in the personal lives of Page 3 People, last week offered an embarrassment of high-on-hormones riches. First there was the sex-pack story of the alleged rape of a two-bit starlet by a one-hit director. The airwaves virtually sizzled with the orgiastic coverage of every salacious charge and counter-charge, beamed live - and replayed every hour, on the hour. Quite in character with B-grade film scripts that the plot faithfully mirrored, there was even a Mumbai-monsoon wet-clothes press conference right outside a courthouse - and tantalising disclosures by the protagonist that she was in a position to reveal intimate details of certain "distinguishing characteristics" in respect of the alleged rapist’s private body parts. Prime-time news lead, naturally. 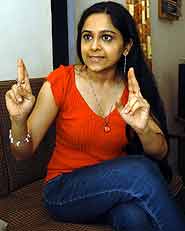 Now, it is fairly universally known that the private lives of some showbiz personalities does not exactly conform to the highest standards of morality. Nor is it any secret that the film industry isn’t quite a beacon of women’s empowerment. Therefore, precisely what greater social cause was served by these reports - beyond a titillating validation of these well-known verities - isn’t quite clear. If anything, going by the profusion of smutty, sexist SMS jokes that the case and its high-on-innuendo coverage has spawned, they may have done incalculable harm to the public perception of genuine victims of rape. I say this without any prejudice to the ongoing court proceedings: the Preeti Jain case and the media coverage have only served to reinforce in sick minds the sordid gender stereotypes about career women’s likeness to black widow spiders: that, first, they mate you, then they eat you up. 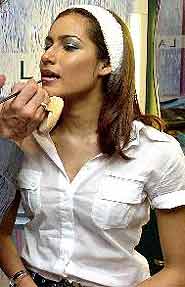 Just when viewer interest in this courtroom drama appeared to be getting a little flaccid, so to speak, news of the death by hanging of model and VJ Nafisa Joseph came in. And among the media vultures, this sparked off another feeding frenzy. For three days, the channels offered saturation coverage of Nafisa’s psychedelic fashion career, her record as an animal rights activist, her existential anxieties - including a succession of failed relationships - and her imminent marriage. News anchors quizzed Nafisa’s friends and relatives, and even an asylum of psychoanalysts, to try and gain insights into her tortured frame of mind and the circumstances that might have driven her to such a drastic end.

Now, don’t get me wrong: I’m not so insensitive that I’m not moved by the death in such tragic circumstances of one so young. That someone who evidently had an infinite capacity to love should have died heartbroken is doubly tragic. But with due respect to Nafisa’s memory, her unfortunate death is a very private tragedy. She was, for all her kindness to animals, no more than a beautiful socialite who led a fairly vacuous life and had a notoriously poor record in matters of the heart. But watching television last week, you’d have imagined that a former head of state had passed on after years of meritorious service in the cause of the people.

It’s unlikely that most of those who tearfully watched the coverage of Nafisa’s passing will know of Gunnala Narayana or his son Gunnala Kumar: for theirs is the story of another India, one that doesn’t quite make it to the glare of television. Writer and journalist P. Sainath records (The Hindu, August 2, 2004) that Narayana, a farmer in Mirdhoddhi village in Andhra Pradesh’s Medak district, committed suicide in August 2003, after a crop failure. He was heavily in debt, and that burden passed on to his impoverished heirs - wife Lakshmi, her son Kumar, her daughter and her daughter-in-law.But unable to bear the burden, Kumar too ended his life in June 2004, leaving the three women in his family in dire straits. 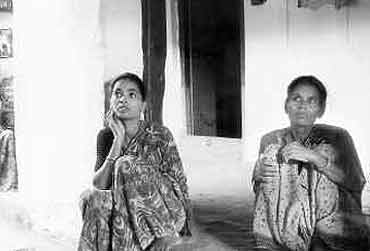 Narayana and Kumar are only two of over 3,000 farmers in Andhra Pradesh who, heavily in debt, were driven to suicide in recent years. Like Nafisa, they too died heartbroken, but unlike her, their deaths were the direct consequence of the vagaries of the monsoon and the stranglehold of predatory moneylenders, an uncaring state’s economic policies, the absence of agricultural credit or any other safety net for poor farmers. In that sense, they died very public deaths. But watching television over the past year, you wouldn’t have got a sense of the tragedy in the rural areas, only of a Shining India.

As was said on a more famous occasion, "When beggars die, there are no comets seen; the heavens themselves blaze forth the death of princes." Which is perhaps why the story of over 3,000 farmers in penury who committed suicide wasn’t tragedy enough for our television networks, but the death by hanging of one beautiful socialite, particularly one who was kind to animals, has sent them into paroxysms of 24x7 grief.

But how long will the television cameras - and the metropolitan, middle-class TV audience - look the other way? How many times can they turn their heads, pretending they just don't see? And how many deaths will it take till they know that too many people have died? "No man," said Donne, "is an island, entire of itself; every man is a piece of a continent, a part of the main… Any man's death diminishes me, because I am involved in mankind; and therefore never send to know for whom the bell tolls; it tolls for thee."