Chinese Reporter's Eye-Roll Goes Viral, Then Gets Censored By Authorities

Journalists are now 'prohibited' from discussing the 'eye-roll' on social media. 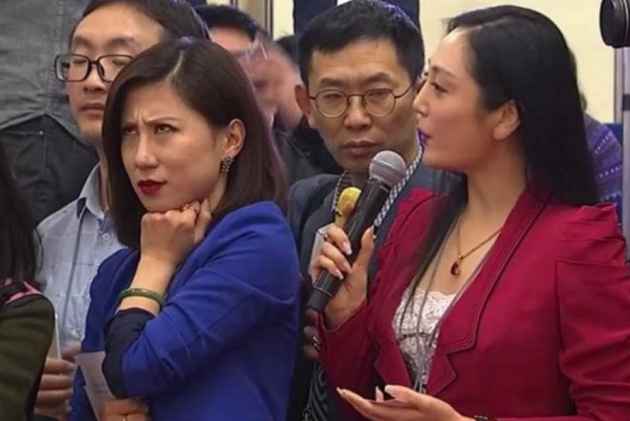 The Chinese government, as we speak, is implementing a very crucial task-one it had cared to venture on times aplenty- erasing social media memory of an unassuming journalist.

Liang Xiangyi, a Shanghai-based financial journalist, unprepared to what her facial expression may bestow, rolled her eyes apparently in disdain of a fellow journalist's softball question to the Chinese government at a press conference.
Captured on live TV, the footage of what has come to be a controversial eye-roll could not be edited for public viewing, and so it soon became meme worthy, and talked about in the country's elusive social media.  At the same time, it caught the attention of the Chinese authorities.
Deeply perturbed by the facial expression, the ruling Communist party's censors removed the video, with Liang's name reportedly becoming one of the most censored terms on Weibo, China's equivalent of Twitter. Liang paid a hefty price for that eye-roll with authorities revoking her media accreditation to cover the NPC.
According to a report by the China Digital Times, journalists were also 'prohibited' by  authorities from discussing the 'eye-roll' in social media or share any post related to it.
“Urgent notice: all media personnel are prohibited from discussing the Two Sessions blue-clothed reporter incident on social media,” it read.
Press conference of the National People's Congress (NPC) is known to be choreographed with questions from government-friendly media channels carefully screened before they are allowed to be addressed.  Xiangyi's evident contempt was perhaps against one such softball, rather long monologue-ish question asked by journalist Zhang Huijun in the press conference, on the sidelines of China’s annual parliament.
In a garb of transparency and interrogation, Huijun is learnt to have asked a softball question to Chinese officials on the country's OBOR project.
Her 44-second long question that visibly irked Xiangvi, was this-
"The transformation of the responsibility of supervision for state assets is a topic of universal concern. Therefore, as the director of the State-Owned Assets Supervision and Administration Commission of the State Council, what new moves will you make in 2018?
"This year marks the 40th anniversary of the Reform and Opening-up Policy, and our country is going to further extend its openness to foreign countries. With General Secretary of the Chinese Communist Party Xi proposing the One Belt One Road Initiative, state-owned enterprises have increased investment to countries along the route of One Belt One Road, so how can the overseas assets of state-owned enterprises be effectively supervised to prevent loss of assets? What mechanisms have we introduced so far, and what's the result of our supervision? Please summarise for us, thank you."
In support to their reporter, Liang's employer later shared a video of her posting a concise, to-the-point question, not laced with praises for the government.
“What is going on with Chinese free trade agreements with other countries? What is the relationship between China’s free trade negotiations and the multi-lateral trading system? And how do you think China’s multi-lateral trading system will develop in the future?. Thank you”, she asked.