Carl Schuster, an expert on maritime issues speaks to Outlook about China’s growing naval assertiveness across the Indo-Pacific.

More from Sanjay Kumar
View All

Carl Schuster, an expert on maritime issues who is currently teaching at Hawaii Pacific University and has written extensively on maritime issues. Schuster is an on-call subject matter expert for CNN International. Schuster speaks to Outlook about China’s growing naval assertiveness across the Indo-Pacific.  Excerpts:

Q) Why is China defiant in the South China Sea?

China recently warned the US that it will be defeated if the two superpowers go to war.  This threat to the US by China came in response to the joint military drill carried out by the US, Japan, Australia, and France some time back.

There is already an escalation of tension with the Philippines refusing to withdraw vessels from the disputed territory of the South China Sea (SCS). China’s Maritime militia and the South China Sea are often in news because of the militia's bullying tactics along the maritime boundary with the Philippines, Vietnam, and Japan. The People's Armed Forces Maritime Militia (PAFMM) of China has evolved from the Communist Party's 1950 consolidation of people's militia units comprising mainly fishermen and coastal workers. Its initial role was confined to keeping a hawk’s eye on the People's Republic of China (PRC)’s coastal waters and reporting any suspected activities to the People's Liberation Army (PLA). They were recruited, trained, and equipped by the party's Bureau of Aquatic Products, which assigned former PLA officers to train and direct the militia's operations.

Q) Please elaborate on the origins and evolution of the Peoples Maritime Militia?

Peoples Maritime Militia operated very close to the maritime boundary till the 1960s. However, their activities started expanding in subsequent years. They started bullying South Vietnamese fishermen in Paracel and Spratly islands in the late 60s. Their first significant military operations came in January 1974 when they seized South Vietnam’s Paracel Islands. They engaged the South Vietnam Naval unit with 400 militia troops and captured the islands. This island is still with China.

People's Armed Forces Maritime Militia (PAFMM) have been the leading component of the PRC's bullying in the East and the South China Sea since the early 80s. In fact, due to the early gains by this militia unit, China built ‘fishing shelters’ to protect their fishermen in the Spratly islands. Their activities increased further after the US Navy pulled out of the Philippines in 1994. With the help of the PLA, the PAFMM isolated all the neighbouring countries and captured Mischief Reef and Scarborough Shoal. This compelled the US to support the Philippines in the South China Sea.

Q) What is their organisational structure; strength and fleet availability?

A unit of the PAFMM operates under direct military command for conducting state-sponsored activities. Although it is locally supported, reports to the top of China’s military bureaucracy -- Commander-in-Chief Xi Jinping.

The exact number of fishing vessels possessed by them is not known. Most estimates put the figure at around 350 out of which 225 are in the South China Sea. Their vessel hulls are made up of reinforced steel. On the other hand most of the other fishing vessels in the South China Sea are made of wood or other light materials.  The PAFMM vessels are faster which puts them at an advantageous position in an encounter. They can ‘bump’ the other vessel at will with little risk of damaging their own hull.

Most regional fishermen are unarmed, but PAFMM vessels have small arms on board and in some cases, Rocket Propelled Grenades and machine guns. They are rarely used but are available.  Most of the PAFMM vessels have water cannons mounted above the pilothouse. They aim the spray at the other vessels’ pilot house to blind the crew, but sometimes they aim it at the engine exhaust if the other vessel has one. Cold seawater hitting a hot engine tends to damage the engine, leaving the other craft dead in the water. The PAFMM vessel can then do what it wants, bump, ram, or just leave. 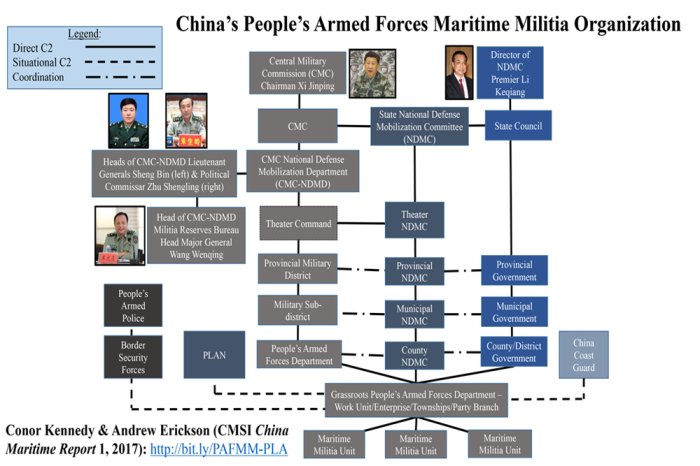 PAFMM is leading in this part with its bullying tactics. They threaten the Vietnamese and Filipino fishing ships, which are small, slow, and less robust. The militia threatens these fishing boats with small arms and attacks them with high-pressure water cannons, sinking them. This is particularly true for Vietnamese fishing vehicles. The Chinese Coast Guards are very often seen helping the militia group in their nefarious activities.

However, the Chinese government headed by Chairman Xi Jinping has never admitted the connection between PAFMM and China’s military. They claim that they are fishermen. This enables the PRC to deny any involvement of the Chinese government. That is their greatest advantage – all their activities are termed non-military and civilian in nature.

The PAFMM's do not use firearms or other military weapons so their actions generally fall short of an ‘act of war’ that might trigger retaliation. It can also compel Manila to seek support under the US-Philippine Mutual Defense Treaty.  That is why the US calls PRC's actions ‘Grey Zone Operations’ --- they are acts of aggression but fall short of military actions that would risk triggering a military response. Retaliation has to be proportional to be justified under international law.

The PAFMM continues with its activities in the East and the South China Sea. For occupying an uninhabited island, the PAFMM does the initial seizure posing as fishermen. When other countries confront them with their Coast Guards or law enforcement agencies, they find themselves confronting an armed militia that is fully backed by China’s Coast Guard or PLA’s Navy. The situation can escalate into a full-fledged war if the other party insists on vacating the island or else leave the annexed island to China. Such is the highhandedness of China that when an international arbitration held the Chinese occupation as illegal, it refused to abide by the judgment saying all nations should ‘respect’ international law.

At the time of the real war, PAFMM may shift to supporting roles like defensive mining as they did during the PLA Navy exercise in 2014. The PAFMM would act as one of the many eyes of the fleet, land militia troops in remote areas or covertly land troops before the conflict starts.

Q) Is there any parallel in the world to this kind of formation?

European countries do have fishermen as coastal observers, but nothing of this sort. The Vietnamese have a paramilitary maritime militia of about 10,000 people. They use wooden-hulled vessels and their crews carry small arms and RPGs. The Philippines had thought of forming a similar militia, but they are far away from giving it a concrete shape. Russia and few other countries have also offered their fishermen to serve in their navy's reserve battalion so that they can be requisitioned at the time of war, but none of them is a match to PAFMM.

Q) Why is China more active in the South China Sea than in the East China Sea?

Q) What options do the smaller maritime states in SCS have for countering the militia?

China wants to dominate the South China Sea, which would give Beijing a strategic advantage against Taiwan and Japan, before risking a conflict over the Senkakus. Xi always goes for an easy target that he believes can be achieved with minimal risk and costs. Traditional thought in the Chinese military believes in isolating the enemy and establishing an advantageous geopolitical and military superiority before engaging in battle. Also, the best leader is the one who achieves ‘victory’ without fighting.  China has secured much of the South China Sea and is using the PAFMM (massing in the anchorage) to expand its control without firing a shot.  It is working so far. However, doing that around the Senkakus would be difficult and expensive.