Jayalalitha's party candidate may have won the Pudukottai bypoll by 1,01,998 votes but DMDK Chief Vijayakanth says he's not defeated because his candidate retained his deposit, winning 30,500 votes...

Amma’s Fury
The CM’s euphoria at getting 168 councilors (66 of them women) in the corporation after the local elections last October has begun to evaporate and reality has kicked in thanks to widespread mounting complaints against the councillors. The local media has been carrying reports about councillors getting kickbacks from contractors, extorting money from traders, throwing their weight around — there was even one complaint about the husband of a Perungudi councillor behaving like an extra-constitutional authority. There were complaints from other sources too that councillors were demanding bribes for road projects, water/sewerage connections, building plan approvals. In all there were nearly 85 councillors ( including party functionaries and zones and standing committees) linked to various allegations categorized under 15 various heads.

All the gathered councillors gathered at a hall in T’Nagar were nervous about the riot act they were expecting from amma. And armed with a vigilance report about their performance, she gave it to them, even naming names and their transgressions in many cases. “I will wait till the end of next month. If I continue to receive complaints, I will dissolve the Council and run it with special officers,” she warned. And added to their anxiety by threatening that when new elections are held, none of them would be given tickets.

The closed door session had the mayor Saidai Duraiswamy who has so far excelled in being sycophantic to amma but not doing anything for the metropolis unlike his predecessor M Subramaniam, even coming out of the meeting ashen-faced. Jayalalitha pointed out that it was the people’s perception that the DMK was corrupt which led to it being defeated in the 2011 assembly elections. With her setting her sights on a national role, she does want what happened to the DMK happening to the AIADMK. Hence the “talk”. Although, she did have occasion to feel furious with her councillors and give them a talking to 2003, during her second tenure. And apparently, it did not have the right effect. A political analyst was cynical, “These councillors are obviously not giving a cut to the party and hence the rebuke.”

Et tu Brute?
Ironically even as the CM has set up a special cell for land grab cases (Jayalalitha told the assembly recently that 34,703 complaints were received and 1317.15 acres of land worth Rs 750 crores was recovered and restored to rightful owners) against DMK leaders and cadre, a few AIADMK councillors are now being accused of grabbing land. While the CM warned them of legal action, she did not say whether these complaints would be forwarded to the special cell. Incidentally, former DMK minister Veerapandi S Arumugam, against whom there are several cases of land- grabbing was again arrested last week on charges of hatching a conspiracy to set ablaze huts in north Salem last Sunday. The masked men who set the huts ablaze allegedly named him leading to his arrest in the case.

Different Strokes
But clearly this government is appointing double standards when dealing with complaints as pointed out by a Trichy judicial magistrate. Trichy MLA and former minister M Paranjyothi has been accused by alleged estranged wife, Dr P. Rani of taking 60 sovereigns of her jewellery, cash of Rs10 lakh cash and a plot of land in Sayanur, worth Rs 2.40 lakh. She approached the court last year for justice. However, despite the magistrate directing the police on November 11 to register a case and file a report by December 9, it did not happen. Significantly, Paranjyothi was a minister then. Paranjyothi was inducted into the cabinet after he won the Tiruchi seat in a bypoll, but was dropped by the CM later. Still, four months after her complaint was filed, Rani filed a petition on May 10 saying that nothing had been done. The court gave 30 days to file a chargesheet but the police sought more time saying the alleged accused was not co-operating. Now July 9 is the new date given. It remains to be seen whether Pranjyothi will be able to make the complaint go away. Incidentally, Jayalalitha had given him the ticket despite allegations by the second wife. 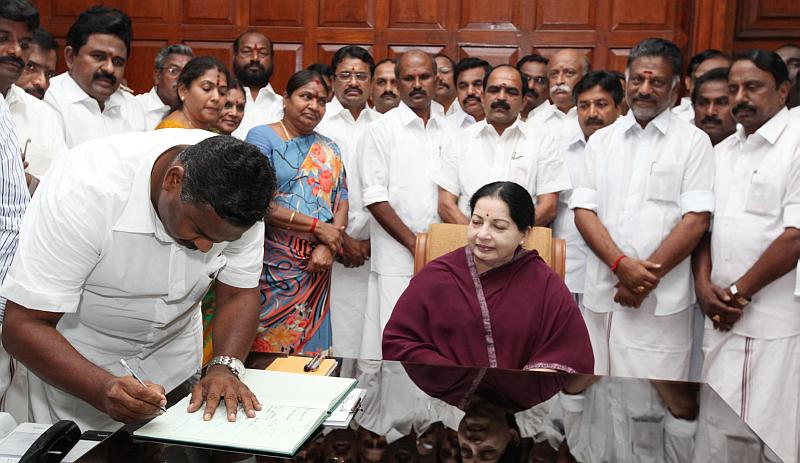 Whose Victory?
So who’s celebrating more? CM Jayalalitha, because her party candidate (Karthik Thondaiman) won the Pudukottai bypoll by 1,01,998 votes or DMDK Chief Vijayakanth whose candidate Jakir Hussain lost but miraculously retained his deposit, winning 30,500 votes (the remaining 18 candidates lost their deposits). It was hard to tell because both of them gave their own spin to the result. But methinks, Amma should celebrate less because despite sending a 52 member team including 32 ministers and ten mayors, she did not manage to humiliate Vijayakant which is what she set out to do at Pudukottai.

“The people have proved that the DMDK will move upward in Tamil Nadu politics. The Chief Minister during her campaign said no other party would retain its deposit. But the DMDK has secured 30,500 (21.3 per cent) votes and retained its deposit,” Vijayakant exulted. He added that though the ruling party wanted to win by a margin of one lakh, it’s winning margin was only 71,498 votes.

Jayalalitha’s spin was this: The AIADMK got 71 per cent of the votes. According to her, the DMK’s traditional votes still went against her party even though that party boycotted. The CPI had won this seat in last year’s assembly elections by getting 47 per cent of the votes( In fact, it was the tragic death of the CPI MLA Muthukumaran that necessitated this bypoll). So her candidate getting 71 per cent of the votes meant he got an increase of 24 per cent in the vote margin and that was “huge”. And of course her reasoning was also that her party won because of her “accomplishments and good governance”.

Necessity as Virtue
For a man who did not give the AIADMK the pleasure of a walkover in the Pudukottai bypoll even after all the other political parties boycotted, Vijayakant has decided to boycott the Presidential elections next month. His explanation: the centre has failed to see that TN got justice on various fronts, including Inter-State water disputes. DMDK has 29 MLAs, each of whom carries 176 votes in the Presidential election.

Vijayakant gave a long list of why the DMDK was planning to boycott. Farmers in the Cauvery delta could not go ahead with the Kuruvai crop because Karnataka had refused to release water from the Mettur dam citing inadequate storage. Mullaiperiyar dam could not be raised to 142 feet because of Kerala’s “adamant attitude”. Although inter-linking of all rivers would solve such problems, the centre was “dodging citing environmental considerations.”

The centre’s handing over of Katchateevu islands had deprived TN fishermen of fishing rights. The centre did not intervene to stop the genocide of Tamils in Sri Lanka in 2009. “In fact it co-operated with the Sri Lankan government in the war against the Tamils,” he said. He went on to add that, “Boycotting the Presidential poll will be a great service to Tamil Nadu.”

The political reason for his boycott is that he cannot go with the Congress’ choice considering the DMK is supporting it. And there’s no way he will support Jayalalitha’s choice, Sangma, considering that with Kalam keeping out, even the NDA only has him to consider. So boycott is more a necessity than a virtue. 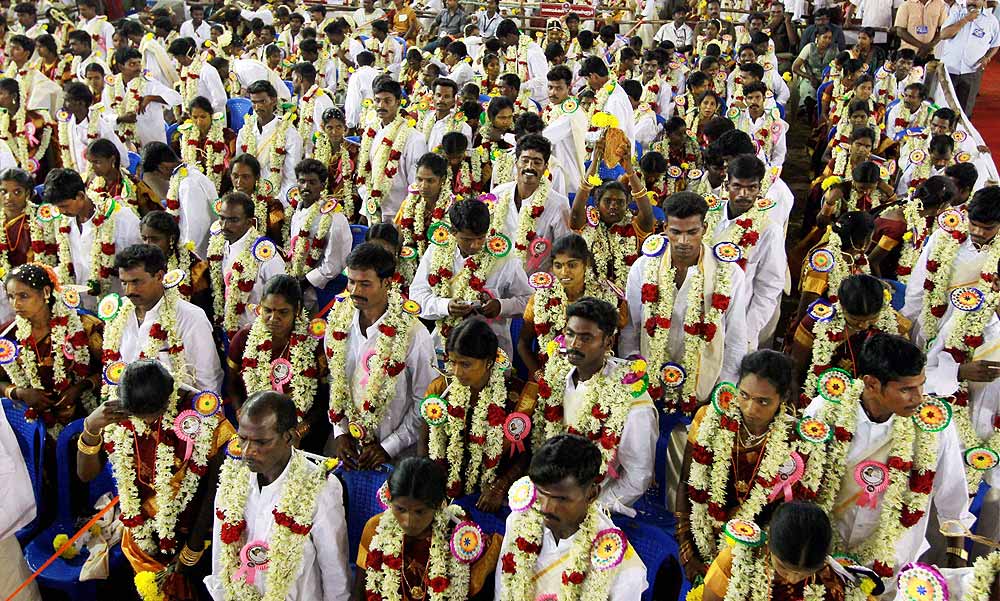 Amma's Mass Weddings
Former CM Karunanidhi attended a lot of weddings when his party was is power, either getting down from his special van to bless the couple or getting the couple to come to his van to get blessed. In Jayalalitha’s case, she has continued the practice she did in her last two terms of conducting mass weddings. Her mentor MGR started a welfare scheme to conduct mass weddings to assist poor girls. While Karunanidhi’s version was self-respect weddings, Amma gets them organised by the Hindu Religious and Charitable Endowments (HR&CE) department and includes pujaris, prayers … the whole deal.

This week she played MC— blessing the mangalsutra and also doling out advice to couples— at a mass wedding of 1,006 couples at Tiruverkadu, known for its Karumari Amman temple, outside Chennai. A huge pandal was erected and the couples (and ten relatives each) were brought in the day before from different districts (a total of 12,000 plus persons), in a smooth operation that the AIADMK cadre including ministers and state officials pulled off together. Jayalalitha played fairy godmother, showering the newly-weds with rice grains and even selected the feast— that included cutlets, milk payasam, chips, sambar, rasam, three types of koottus, appalam— that was served. The guests were also treated to a sumptuous dinner the night before and breakfast on the big day. 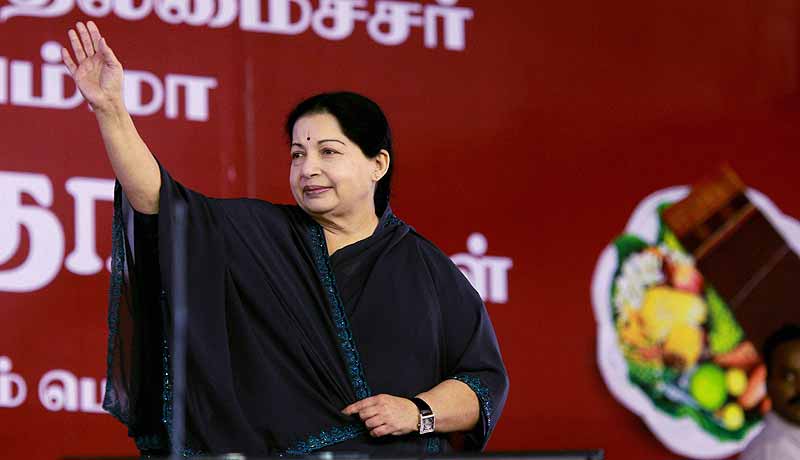 Wedding Presents
Her government, spent Rs 4.56 crore to give 10 gms of gold and silver ornaments including the thali (mangalsutra) and metti (toe-ring) , presented a silk sari and silk veshti to the bride and groom respectively, and 28 household articles. The couples included 11, differently-abled couples, 611 belonging to the Adi Dravidar community, 34 from Scheduled Tribes, 183 couples from Most Backward Classes, 132 from Backward Classes and 46 from other categories.

“These marriages transcend the barriers of caste and creed,” the Chief Minister said after blessing the couples. During her first term between 1991 and 1996, she conducted marriages for 2,500 couples in Chidambaram and 5,004 couples in Tiruchi. In her second term, 1,008 couples got hitched in 2002 and another 1,053 couples in 2003 in Tirverkadu.

She dished out advice to the newly-weds too. “If you identify the challenges and decide to fight, you will get the strength to face it. The courage to stand up to problems rather than being cowardly is what makes us live.” She then went on to say, “If one strives hard to one’s fullest capacities, without worrying about the results, then the blessings from the Almighty will come to help one to achieve the noble goal.” And if any party worker had any doubts about whether this profundity was meant for him/her, she added, “This not only applies to the newlyweds but also to my beloved party workers. Success is sure to follow.”

Well, she may have had former Speaker P.A. Sangma for the Presidential race in mind. It was Jayalalitha, along with Odisha CM Naveen Patnaik, who lobbied for Sangma but initially found no takers. Now with all the drama and intrigue thrown up by the Presidential race, it looks like her candidate will at least be in the race whereas WB chief minister Mamata Banerjee has ended up with egg on her face even if former President A P J Abdul Kalam labeled her “graceful” while declining her vehemence in backing him.

Indulging Nithyananda
“Though Karnataka was prompt in taking action, Tamil Nadu has not taken any action till now,” said Hindu Makkal Katchi’s Arjun Sampath, in his memorandum to the CM’s cell referring to Swami Nityananda who was rearrested by Karnataka police last week, but got bail and came to the Madurai Adheenam, of which he was named controversially as the pontiff recently. The Katchi and Saivite religious heads have demanded that action be taken against Nityananda, who hit the headlines two years ago following the release of a CD which showed him in a compromising position with actress Ranjitha. Sampath’s petition says Nityananda has taken “asylum” at the adheenam and should be acted against taking a leaf out of the book of Karnataka’s cops who took “prompt” action against him. But with Jayalaitha taking off to her own sanctuary in Kodanadu after attending the wedding of Chief Secretary Debendranath Sarangi's daughter, Sampath and others opposed to Nityananda’s Teflon coating, despite the controversy surrounding him, will have to wait.