Unlike her other two terms, the message Jayalalitha wants to send out this time is that she is a working CM, deserving of a national role


May 16 was amma’s first anniversary but every day since then there is at least one full page and a half page advertisement from different government departments hailing her achievements. Interestingly, while all these departments have ministers, the ads carry only her picture, one more reminder that her ministers count for nothing. The bottom line: amma means business this time. Her goal is striving for Vision 2023 where she has promised that Chennai will be the third most attractive investor destination in Asia.

Unlike her other two terms, the message she wants to send out this time is that she is a working CM. She worked two Sundays back to back before the budget and she has been constantly monitoring the power station. In fact, as of June 1, although the mercury is still hovering in the 40-42 degree Celsius range, power cuts have been halved. So Chennai has only one hour of load shedding while other parts of TN have three hour power cuts, brought down drastically from the eight hour powerlessness that the city began to experience from February. More importantly, the power holiday in industries is over and slowly they are picking up the pace.

Jayalalitha has not escaped even once to her Kodanadu estate, her sanctuary in the Ooty hills, where she had spent most of her time during the DMK regime. There were rumours that she would go to the US for a health check-up, but that has not happened either.

Although for the common man the excesses and extravagance on display during the DMK government (it was believed to have spent Rs 500 crore on organizing the World Classical Tamil Conference in Coimbatore in 2010 which became a platform for the Karunanidhi clan to flaunt its power) is absent this time around in the Jayalalitha government, reversal from red to green on the fiscal front seems a bit of a stretch. But one thing clear is that Jayalalitha wants to be noticed as a performing CM in keeping with the trend set by her Gujarat, Bihar, Delhi counterparts so as to buttress her case for a national role.

Jayalalitha has been using her sharp tongue to rail at the centre over the last year and she got one more opportunity this week. After her meeting with Planning Commission chairman Montek Singh Ahluwalia, she commented: “What this entire exercise amounts to is that we have come all the way to Delhi to have discussions and meetings with the Planning Commission so they can tell us how to spend our own money.” Ahluwalia defended himself saying the discussions were important because the centre also contributed to state outlays. She rounded on him furiously pointing out that the centre’s contribution of Rs 3,000 crores in a total outlay of Rs 28,000 crores was not something to brag about. “It’s TN’s own money,” she told reporters in Delhi.

Jayalalitha’s point to the Planning Commission was that, in contrast, her government’s prudent fiscal management strategies had not only reversed the dismal outlook , but she had returned the state to a revenue surplus in 2011-12 and the fiscal deficit as a percentage of GSDP had been contained at 2.85 per cent. The latest estimates of the Central Statistical Organization (CSO) placed the economic growth rate of TN for 2011-12 at 9.39 per cent, much above the national average of 6.50 per cent, she said in her speech.

While her predecessor Karunanidhi is usually credited with fighting with the centre to preserve the state’s independence, it’s Jayalalitha who has brought federalism to a whole new level in her year-long battle with the centre. One of her earlier barbs was that the centre was treating states as “glorified municipalities”. It must be said that with the DMK being part of UPA since 2004, Karunanidhi has found his hands tied except for lip service now and then.

Between the Cup and the Lip

However, her first attempt has come a cropper. Her strong endorsement of former Speaker P. A. Sangma as a potential first tribal President has floundered despite the active support she got from her Odisha counterpart, Naveen Patnaik. But she is still braving it out. In Delhi when she was asked whether her lobbying for Sangma had borne fruit, she said, “I have made a request to the leaders whom I know well. I prefer to wait and watch the developments.” Now that another woman party chief (Sonia Gandhi) has been authorized to choose in a scenario where she still commands the numbers, amma’s choice is unlikely to go through. There are other hurdles too for her to cross while coveting a national role, the biggest of which is the judgement on the disproportionate assets case being heard by a Bengaluru court. There’s a real chance that Jayalalitha might be history and O. P. Paneerselvam might have to come to the rescrue again!

Writing on the Wall

In some cases and situations, one cannot be faulted if one sees the DMK taking on AIADMK’s loud and sycophantic overtones and even Karunanidhi, the self-professed rationalist, suddenly becoming superstitious a la amma. His 89th birthday on June 3 was one of those occasions. There were other signals too that emanated about the dynamics within his clan. While the usual extravagance was missing, what caused shock was the garland of currency notes a la Mayawati that he received. Signals are everything in politics: so does it mean his cadre was being defiant of the image that the DMK – and one of the main reasons why it lost the assembly elections – has got after two of its leaders have been arrested, including Karunanidhi’s daughter (Kanimozhi) in the 2G scam?

Ten days before his birth date, but on a day (May 23rd) when his “star” birthday fell, the Kalaignar Kaditham (Kalignar’s letter), his regular column in the party organ, Murasoli, had a message from him, “I know that you would have showered your birthday wishes on me….”. While the rest of his column spelt out his rationalist line and his adoration for rationalists Periyar and Anna, the talking point among his cadre is why his birthday message came out on May 23 and not June 3. Was he actually succumbing to astrology while professing to be a rationalist? In recent years, he has tended to confuse his cadre about his leanings.

However, there was no confusion in the posters that came up outside his CIT colony residence that he shares with second wife, Rajathiammal, and daughter, Kanimozhi and at his Gopalapuram residence that he shares with Dayaluammal. Two massive flex hoardings outside CIT colony showed Kanimozhi being hailed as Karunanidhi’s successor. A billboard’s message was telling: An educated woman can show the way — like a candle. The other poster showed Karunanidhi and Rajathiammal with garlands around their necks. At the Gopalpuram residence, it appeared that elder son and union minister, M K Azhagiri, although he came and wished his father, was missing on the posters that had other sons, M K Stalin, M K Tamilarasu and even former union minister, Dayanidhi Maran. In a way, it was underlining the power struggle between the children of his two wives and also the ongoing one between the two sons – Stalin and Azhagiri – of one wife.

But there was a small difference – is Stalin finally edging his brother out and is that why Azhagiri’s photograph was missing from the posters? Besides, Azhagiri was also missing at the Anna Arivalayam (DMK headquarters) function and later at the public meeting his father addressed.

The third and most telling signal was at Madurai, Azhagiri’s former fiefdom, but slowly slipping from his hands largely because of the onslaught of CM Jayalalitha on different fronts to cut him to size. Azhagiri’s men showed no enthusiasm to celebrate the patriarch’s birthday and did not even bother to play party songs, one of the main features at any party event. They have still not forgiven Kalaignar for the expulsion (later nullified) of Essaki Muthu, one of Azhagiri’s men who boycotted Stalin when he went there recently to strengthen the party’s youth wing.

In complete contrast, Stalin oversaw the launch of a website www.wishthalaivar.com by the party’s student wing which has already got close to a lakh hits wishing the patriarch for his birthday. This shows Stalin’s growing clout with the youth, which is going to be crucial in his possible succession.

Stalin is also moving quickly to woo Raja, who has been allowed by the court hearing the 2G case, who arrived in TN for his homecoming today. Stalin did not let any grass grow under his feet, taking off to Delhi for a dinner that Raja had mid-week. Although Azhagiri met Raja after he came out on bail last month, it’s Stalin’s moves that are causing speculation. Stalin obviously knows he will benefit from wooing Raja, seen as the Dalit face of the DMK.

Reading the writing on the wall seems to be a tricky exercise considering the DMK’s dramatis personae and the signals they put out.

But going by Karunanidhi’s “I will contest if I am alive” line, his children seem to be in an unseemly hurry to lay claim to his throne. He became DMK chief for the 10th time in December 2008, and is game for one more round. In fact it’s not the first time he has put his intentions upfront while his two sons, Stalin and Azhagiri, bicker and squabble over who will be the heir.

There is one school of thought which says that he has his hat firmly in the ring to prevent his sons destroying the party he helped set up and strengthen in his six decade-long political life. The other view is that the old warhorse is not going to fade away because political ambition continues to burn inside him. A glimpse of that was seen at the general council meeting in February when supporters of Stalin and Azhagiri clashed openly. Before storming out, Karunanidhi made it clear: We will conduct an election for the post at the next general council meeting. Let the outcome decide who will lead the party. 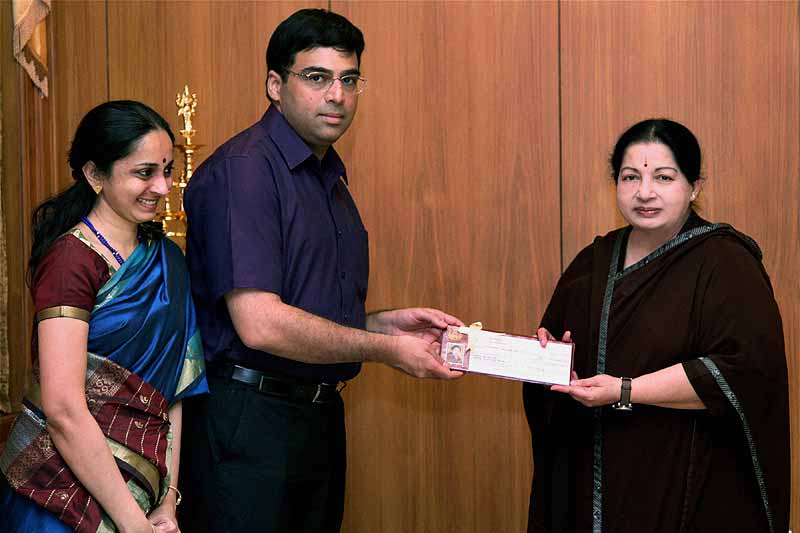 No Bling, Only Money

If Mamata Banerjee could rustle up an extravaganza for a cricket team that has hardly any Bengali cricketers and is owned by Bollywood star Shah Rukh Khan to show her ownership of a game, Jayalalitha could have made a big deal about Anand Vishwanathan who recently won his fifth World Chess Championship title. But although Anand got quite a hero’s welcome at Chennai airport, he got a more sedate reception from the CM when he and his wife, Aruna, went to meet her this week. Earlier she had added her voice for Anand getting a Bharat Ratna and released this congratulatory message, “You have won this much-deserved title after intense nerve-racking rapid tie-breaker games and proved your prowess.”

During her meeting, Jayalalitha quizzed Anand on his game, his preparation, his next game that had Aruna gushing that the CM was so knowledgeable about chess. Anand said the CM’s scheme to introduce chess in schools (age group 7 to 17) will bring a “golden era for sports in the state.” Apart from his “incredibly nice” meeting, Anand also got a Rs 2 crore cheque from the CM. No gold chains of the kind Mamta honoured Kolkata Knight Riders’ winners with. But one question is common to both CMs – where are they going to find the money for such grand gestures?