It was never a question of if. It was always a question of when CM Jayalalitha and DMDK chief Vijayakanth would butt heads. It finally happened this week...

A Cyclone in the House

It was never a question of if. It was always a question of when CM Jayalalitha and DMDK chief Vijayakanth would butt heads. It happened this week in the short assembly session, when Vijayakanth abandoned walking on eggshells and instead developed a spine to justify his being elected as the opposition leader after his party got 29 seats in the assembly election last year. The short assembly session, the first this year, was expected to be stormy, but it is probably for the first time that things got so heated that an alliance broke on the floor of the House.

When Vijayakant’s MLAs questioned the hike in milk prices and bus fares, Jayalalitha’s ministers chose to say that the DMDK would have been nowhere had they not forged an alliance with the AIADMK. Viajaykant fuelled the fire by wondering aloud what would have happened to the AIADMK government if it had carried out the hikes before the local body elections in October.

Before long Vijayakant and Jayalalitha clashed fiercely on whose party helped the other in the assembly polls. “I regret it, I am ashamed of it,” Jayalalitha said, speaking of an alliance that was stitched together reluctantly and is now over. The reluctance was evident even then with Vijayakant skipping a meeting of all the AIADMK’s allies in Coimbatore on the eve of the poll. For a person who has once called Vijayakant a “drunk” some years ago, it was nothing when she referred to him as “disgusting” (after he and his MLAs were jettisoned from the house by the speaker who has now issued him a showcause notice to appear before the privileges committee after he showed his tongue apart from gesticulating). She added acidly, “This only shows what will happen if undeserving people reach key positions.”

Jayalalitha had the last word in the House. “It was Vijayakanth’s good fortune that he struck an alliance with us. We would have won without their alliance. Though I was not in favour of an alliance with the DMDK, I agreed to it only in deference to my partymen’s wishes,” she said, articulating what everyone knew.

Jayalaitha dared Vijayakant to contest alone in the by-elections scheduled in Sankarankoil (Tirunelveli district). “We are going to field our candidate at Sankarankoil. If your party has the guts, field your candidate there. We will record a massive victory even after the hike in bus fares and rise in milk prices,” she said. Vijayakant’s comeback was that all ruling parties win by-elections, so it is no big deal. He pointed out that the AIADMK had not won a single by-election (there were 11) when the DMK was ruling.

Vijayakant later told reporters that his party would announce its own candidate when the bypolls are called. But the truth is that C. Karuppuswamy of the AIADMK (whose death last year has necessitated the bypoll) had won this seat for the last four times, including when there was a wave against the AIADMK in the rest of the state. It’s very unlikely that the DMDK or any other party will win when sympathy votes are going abegging for the AIADMK.

No Reason to Gloat

DMK patriarch M Karunanidhi said gleefully, “The AIADMK has always had its own unique way of handling opposition parties. It’s doing it now too.” But with a general council meeting coming up this weekend in the backdrop of older son M K Azhagiri challenging younger brother M K Stalin, he has no reason to gloat. Stalin has let it be known that he supports restructuring of the party’s district units so that bigger district will have more than one unit. DMK stalwarts like Veerapandi Arumugham see this as an attempt to cut them down to size so that Stalin can tighten his hold on the party.

Naturally, Azhagiri is opposed and is also furious at a survey done by a magazine Kumudam Reporter naming Stalin as the most possible successor to Karunanidhi. While Stalin was given 58 per cent, Azhagiri came in a distant second, polling 12 per cent of the votes in the survey that covered 17,620 people including DMK partymen. The last time there was a survey, Azhagiri was so incensed that his supporters torched the Maran-owned Dinakaran newspaper (that carried the poll which virtually made Azhagiri an also-ran) and three employees were killed in May 2007. That survey also signalled a family feud between the Karunanidhi clan and the Maran brothers that has now been repaired.

That poll too gave Stalin an overwhelming thumbs-up. But Azhagiri when asked whether he had any message for Stalin on his 61st birthday (it was on January 31) was curt, “He is like any other member of the DMK.”

Jayalalitha said about Vijayakant that the DMDK’s good times “have ended and it will now be on a downslide.” Jayalalitha is now in the unenviable position of being friendless because she has always been at odds with the DMK, now the DMDK, while the PMK and she were so far apart even when in an alliance for the 2009 Lok Sabha elections that Dr S. Ramadoss was bound to divorce his party from hers which he did. And now the Sasikala mess has exploded in her face. But you have got to hand it to the lady – as an insider said, “She has guts.” So while Jayalalitha politiks with other parties, she is also purging her party of the Sasikala-influence.

For the first six months of her reign, CM Jayalalitha went after the DMK – overturning her predecessor Karunanidhi’s policies many of which were frowned upon by the courts, setting up a special cell for land grabbers in which several former ministers and even two current DMK MLAs were arrested. Since December, her focus is on freeing the AIADMK from her former friend, Sasikala Natarajan’s (whom she threw out of her Poes Garden residence on December 19) clutches.

So, she’s circling the “Mannargudi Mafia” even as she is believed to have called in auditors and even lawyers to clean up the finances. For instance, recently she made Poonkundran, her personal assistant for many years, the publisher of the AIADMK’s daily newspaper, Namathu MGR, replacing Sasikala. Incidentally, news of Sasikala’s expulsion was carried by Namathu MGR although at that time Sasikala was the publisher. In addition, the paper has a new editor, Maruthu Azhaguraj, who uses the pen name Chitraguptan. Jayalalitha is also trying to take back control of Jaya TV, which was run by one of Sasikala’s family members.

In her seventh cabinet reshuffle last week, Jayalalitha dropped two ministers— Agriculture minister S. S. Krishnamurthy and S. P. Velumani — who were believed to be close to Sasikala and inducted N. R. Sivapathi (interestingly he was dropped last year but taken again as the education minister) and Mukur N. Subramanian. Said a party leader, “Amma wanted to give Sasikala loyalists another chance and told them at the general council that they were on notice. But these ministers continued to be in touch with them (Sasikala group),” says a party leader.

Weeks after getting rid of her Personal Security officers at Poes Garden because they were tattling to their benefactors (Sasikala group), the CM replaced the personal assistants of nine ministers in the cabinet. Most of them were Sasikala group nominees and corruption charges were piling up against them.

The Purge of the Clan

Sasikala’s brother, Divakaran, used a quaint phrase before the Madras high court which was hearing his anticipatory bail application— Kasturi in Rishiyur village in Tiruvarur district complained to the police that her house was demolished on November 28, 2011, at the behest of Divakaran— that he was caught in the “recent melee in the political situation.” Whether or not Jayalalitha will agree with him and his argument that he was being “harassed due to political vendetta” the court certainly did not, because it turned down his anticipatory bail plea. Divakaran’s counsel withdrew the petition.

So, it is likely he will be the next Sasikala man who will be arrested after MRP Ravanan was arrested and remanded to judicial custody till February 10 by the Coimbatore Rural Police last week. An influential man in the party, he had played a crucial role in transfers and ticket distribution. Ravanan, who was expelled along with Sasikala on December 19, apparently was king in Coimbatore with senior officials and ministers regularly seen at his “durbar”.

Ravanan was arrested after a complaint by a contractor V Ravikumar that he was abducted by Ravanan’s aide, Mohan, and kept in an oil godown till he paid Rs 10 lakhs. Ravanan has been arrested on charges of abduction for ransom, extortion, wrongful confinement, criminal intimidation and criminal conspiracy.

There’s another case of criminal intimidation and cheating based on the complaint of a real estate developer— R Krishnamoorthy, MD of RK Imay Property Developers— pending. Ravanan reportedly refused to return Rs one crore Krishnamoorthy had handed over for getting a sand quarry license in Karur. Krishnamoorthy has complained that neither he got the licence nor the money back and instead was allegedly threatened by Ravanan. 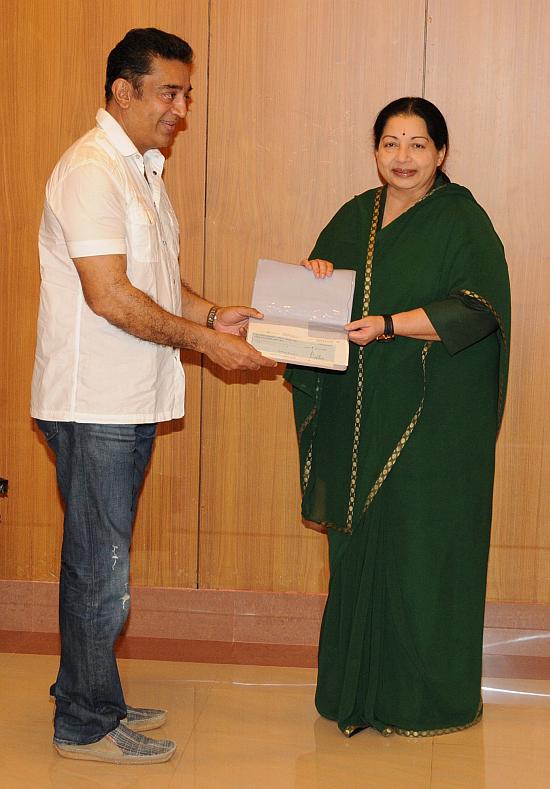 If Rajnikanth met CM Jayalalitha, could Kamal Hassan be far behind? Last week, Rajnikanth met the CM and handed over Rs 10 lakh for the Chief Minister’s Relief Fund. This week, Kamal Hassan met her and handed over Rs 15 lakhs. AIADMK MLAs have given one day’s salary amounting to Rs 57.02 lakhs. The Thane Relief Fund has crossed Rs 64 crores. But there’s a lot of work still to be done in affected districts like Cuddalore and Villipuram where many areas still have no power after the devastation caused by the cyclone at the end of last year.

The State of Education

Often one laments the state of education in this country. An example of that was when school education authorities of Pudukottai district sent out invitations for a three-day camp on January 26 and in it referred to the flag hoisting between 7.30 and 8.30 am as being due to “Independence Day” celebrations. Was it ignorance or just apathy? No wonder we have many youth in this country who don’t know the name of the President or Prime Minister but know Kareena Kapoor’s pet name. Incidentally the camp was for the personality development of school students from six neighbouring districts! And no, no one in the government spotted the mistake, it was members of the public who were appalled and pointed out that January 26 was Republic Day, not Independence Day.

Beyond The Idiot Box