Karunanidhi, who threw a sulk recently when Manmohan Singh was in town, knows that even if he boycotts the PM, bending over backwards to please Sonia Gandhi is the way to do business with the Congress

Bending Over Backwards
Tamil Nadu CM, M Karunanidhi, who threw a sulk recently when the Prime Minister was in town, knows that even if he boycotts Dr Manmohan Singh, bending over backwards to please Congress President Sonia Gandhi is the way to do business with the grand old party. So when it was her birthday last month, he sent an obsequious greeting to Sonia Gandhi. Now he has renamed the 300-year-old government General Hospital (GH) after Sonia Gandhi’s late husband Rajiv Gandhi. It was here that the former Prime Minister’s body was brought when he was assassinated at Sriperumbudur on May 21, 1991. But it’s taken 20 years for the Congress to think about asking and some months of reflection for the CM to concede. Both parties could care less that many things are wrong at the GH and the latest is that with the third and only lift out of order (the other two have not been working for months), patients are being wheeled up on their stretchers even up to the sixth floor for surgery. But since politicians are into empty gestures, Karunanidhi made one and it was lapped up by the Congress. The CM must have figured with his impending trip to New Delhi on January 29, during which he has a meeting with Sonia Gandhi, he should have something solid to give her so he can corner more seats when they both begin their preliminary talks on seat adjustments.

And a measure of how much Karunanidhi wants to please the Congress can be judged from the fact that he has overlooked DK leader K Veeramani’s pitch that the hospital be renamed after Periyar, the father of the Dravidian movement. Periyar E V Ramaswamy, who lived into his 90s, was treated at the hospital on many occasions. Nothing like an election and being embroiled in scams to make you in a please-all mood even to an ally which sought and got the exit of a scam-tainted minister (former Telecom Minister A Raja) and then added insult to injury by taking away the portfolio! Incidentally, the DMK appears to have decided to lie low and not claim any seat during the cabinet reshuffle. When it goes before the people, it does not want to seem power-hungry. A bit late perhaps, since Raja has become synonymous with the biggest scam this country has ever seen.

But not having any other choice helps glue an alliance together too. But Karunanidhi wants the Congress to know how pleasing he can be. So last week he honoured two Congresswomen for their contributions to the development of Tamil language and social justice. Not even the outspoken Congress spokesman Jayanthi Natarajan who has many talents to her credit would claim to be an authority on Tamil language or social justice but there’s a first time for everything. Karunanidhi presented her with the “Perunthalaivar Kamaraj Annual Award”, named after veteran Congress leader and former CM Kamaraj. Congress Deputy Legislature party leader D Yasodha was presented with the “Ambedkar Award”.

The Back Scratchers Club
Although the PM assured Karunanidhi recently that the relations between the seven-year-old allies was “warm” and “cordial”, there has been some tension on the ground between the allies because some in the Congress think the DMK is a sinking ship.

But just like the DMK, the Congress is desperate too. With inflation, the plethora of scams and the Bihar debacle hobbling it and Sonia Gandhi suspicious of the mercurial AIADMK chief Jayalalitha, it’s no time to rock the boat and begin to put to the test whether it can really bring back Kamaraj Rule. As they say: A known devil is better than an unknown angel.

In this case, Jayalalitha has hardly been angelic in the past and recently took off the kid gloves she was treating the Congress with and lambasted the UPA for allowing its alliance with the DMK to even  “destabilize constitutional institutions” while referring to union minister Kapil Sibal’s defence that the CAG had been “totally erroneous” in calculating that Raja had cost the country 1.76 lakh crores in the 2G scam.

So just as Karunanidhi is making nice with the Congress, the latter too is doing the same. Pongal eve saw the unlikely meeting between union minister G K Vasan and Karunanidhi. Unlike Congress Legislature Party leader and DMK-lover Peter Alphonse (who made the request for renaming GH) and home minister P Chidambaram who makes it a point to call on the CM every time he is here, and even backed the DMK on the 2G scam, Vasan had kept his distance. But his camp follower, M Yuvraj, who happens to be the Youth Congress president, has been one of the most acerbic critics of the DMK and has been part of the group in the party which has been vocal about ditching the DMK. Vasan’s meeting was apparently to appease the CM.

Perhaps it's a classic case of what do they say about constantly bickering couples:  Can’t live with you, can’t live without you.

A Thousand Words Worth
Very often the photographs put out by the Directorate of Information and Public Relations are a measure of who is in favour and who is not with the ruling dispensation and also is a mirror of what transpires within the “first family”. 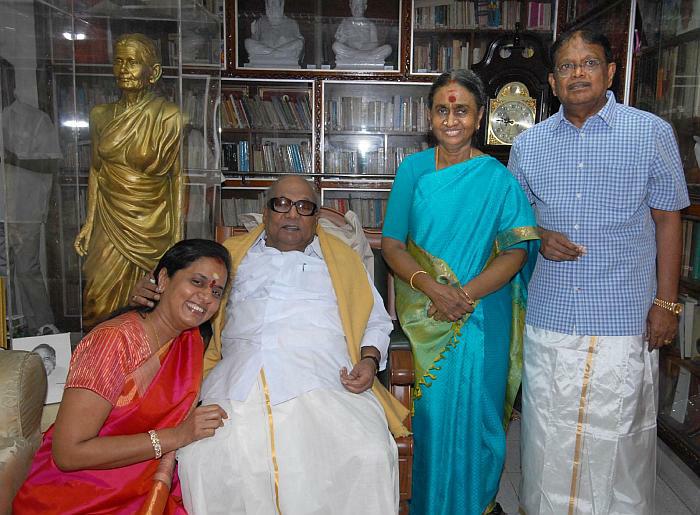 Selvi and husband call on Karunanidhi and his wife Dayalu

When Pongal went by this week-end, union minister M K Azhagiri did not hotfoot it to Chennai with his family to wish his father for the most important festival of the Tamil calendar which has even been declared as the New Year. Unlike the others who wished him including daughter Selvi who came with her husband, another daughter Rajya Sabha MP Kanimozhi who also came with her husband (a rare photo-op) and son Thamaliarasu who came with his family including his grandchild. 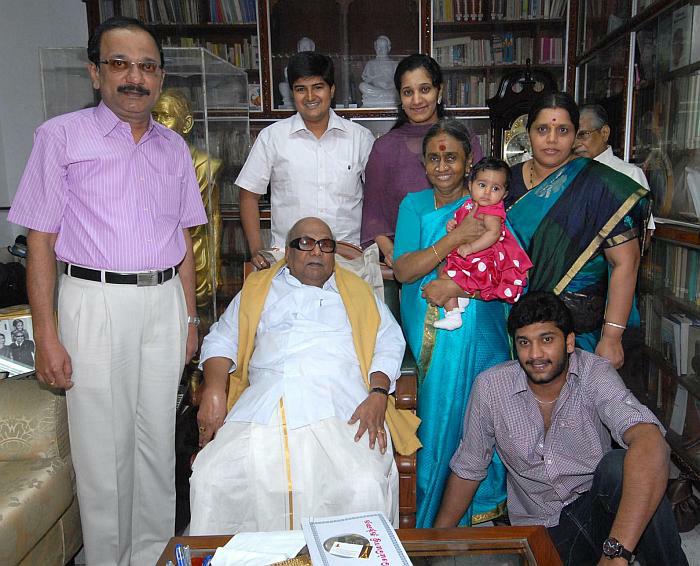 While Selvi even had her father putting an affectionate arm around her, Kanimozhi looked tense in the picture. 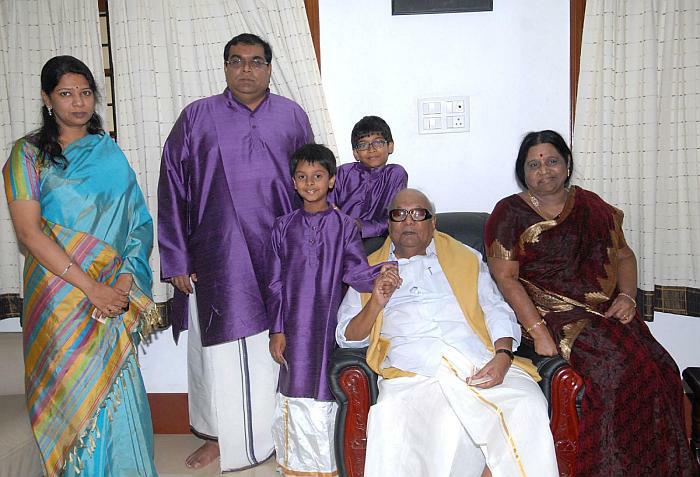 Kanimozhi, her husband and son Aditya call on Karunanidhi and Rajathiamma

But Azhagiri rekindled speculation when he met his father a day after the Pongal festivities, the first time since his rumoured resignation from the cabinet. Azhagiri not only ducked the media at the airport and the CM’s house at Gopalapuram, he timed his visit to avoid younger brother Stalin with whom he shares a blow hot blow cold relationship. 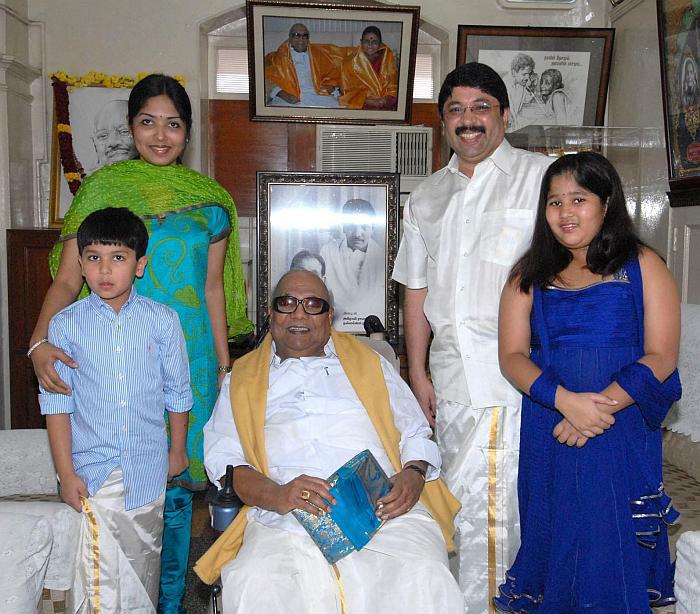 Kalanidhi Maran may have been heard on the Niira Radia tapes plotting against the family (and rubbishing Azhagiri) but it has not dented his granduncle’s affection for him. He not only met the CM with his family but even aired his closeness with deputy CM Stalin when he called on him and Durga (Stalin’s wife) to wish them for the festival.

Cynosure, Eye Sore
Kanimozhi has come a long way in the last few months from favourite daughter who was her father’s eyes and ears in Delhi to someone who has been totally marginalized in the party. Of course her father was indulgent publicly recently when he praised her for her work in youth employment but it’s her absence in Delhi that hits you. Apparently she has been quietly replaced by TR Baalu as the CM’s pointsman in Delhi. Which is ironical because everyone knows the PM did not want TR Baalu back in the cabinet in UPA-2. Even during the cabinet reshuffle, it was Baalu who was confabulating with Congress leaders including the PM. As to Raja, he is not seen, not heard.

Coming back to Kanimozhi, she has gone from the amiable and friendly media face of the DMK to a sulky, testy parliamentarian. She bit a journo’s head off for saying that the Chennai Sanghamam was a “toned down” affair asking him to organize the event from next year himself! But the raids did have their effect on the recently concluded Chennai Sanghamam, the cultural festival to showcase the traditional folk art of the state that she has helmed with Father Jegath Casper Raj, who was raided by the CBI recently. That apparently really bothered her because she reluctantly admitted that “I can say the festival has toned down only in terms of the number of participating artistes (from 1200 last year to 900 this year) because we have not been able to find enough place to accommodate them.”

Unlike previous years when artistes were put up at the MLA hostel, this year they were accommodated at various mandapams. So, despite the CM giving a donation of one crore, this year clearly Kanimozhi did not exercise her leverage with the government because of the 2G shadow over her and Father Jegath Gasper Raj. While one’s mailbox is flooded every year with pictures from the Chennai Sanghamam provided by the Information department, this year the festival had no input from the government, and therefore there were no pictures. Clearly, politics dictated culture. The fifth edition was by far the least shorn of hype, hoopla which these artistes need considering they get a once a year opportunity to display their talent.