Is amma, the Faint-heart as opposed to Azhagiri, the Brave-heart? And Vijaykant sure can dole it out, while Karunanidhi, the Altruist tells us that charity begins at home

The Spectre of Wealth 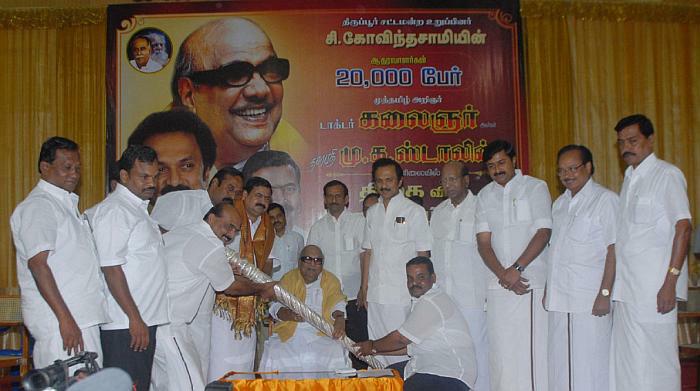 There was a big to-do when UP CM Mayawati was given a garland of Rs 1000 notes. Then began the guesswork about its worth. Was it Rs 5 crore? Or was it Rs 22.5 crore, as the Congress claimed? We got blown away but the issue blew over. No one will speculate or wonder at least publicly about the value of the massive silver gift presented by expelled CPIM MLA Govindaswamy when he joined the DMK this week. The fact that a left party MLA had the resources to give such an expensive present when left MPs are making such a huge noise about the increase in MPs salaries is an indication of how far the legislator has traversed from a party, which gives its comrades meagre salaries while their earnings are given over to the party and pooled, to one which has been accused of winning bypolls through money power.

But why blame the DMK alone when AIADMK chief Jayalalitha has been charged by the CBI of accepting gifts including demand drafts (DDs) worth Rs 2 crore, cash and jewellery totally valued at Rs 4.11 crore in 1991, 1992 and 1993 when she was the CM. Of the 57 people giving DDs, 12 were found to fictitious while 12 others denied they had purchased the DDs. It’s almost 20 years but the Madras high court is still hearing a petition from Jayalalitha seeking to quash the gifts case against her. And, now Judge CT Selvam (who was sworn in March 2009) hearing the case has recused himself, saying that he had earlier appeared in the case in his capacity as additional public prosecutor. So she has bought more time!

Is AIADMK chief faint-hearted (as opposed to the CM’s son Azhagiri who answers to the title “anja nenjar” or braveheart) or does ego come before representing the people which is really what her job profile should be? Well, although she is rousing herself from her inertia and has recently demonstrated in Coimbatore and Tiruchi that she’s a tremendous crowd puller (which CM Karunanidhi dismissed as being “engineered”), she withdraws sullenly from some battles. For instance, she boycotted a meeting of the selection committee held under the chairmanship of CM Karunanidhi to choose the state’s CIC (Chief Information Commissioner). Her excuse? That she was not given the list of persons under consideration.

Of course, typically as in any engagement between her and the CM, both come out seeming petty. In this case, her request for the list was turned down and she was asked to attend the meeting if she really wanted to know who was in the running. Impasse followed by protest. So she sulked and stayed away. She absented herself in 2008 too when the CM convened a meeting to chose State information commissioners. As per section 15(3) of the RTI Act 2005, the selection committee that appoints the information commissioner consists of the chief minister, the leader of the opposition in the Legislative Assembly, and a cabinet minister nominated by the CM (in this case finance minister K Anbazhagan).

The CM, predictably sniped at her the following day saying how she made it a habit never to attend even all-party meetings. His attempt to score brownie points saying that Anbazhagan attended a meeting to pick the CIC when Jayalalitha was CM will fail because everyone knows if Anbazhagan was the CM and not Karunanidhi, she would have gone to the meeting.

Now she says that she had every intention of being there if only the list was sent to her in advance so she could contribute. “But the CM wanted me to sign on the dotted line without raising any question. I cannot offer this kind of co-operation.” So she claims that the appointment in her absence is illegal. Word is the file with the name of K S Sripathi, who will finish his six-month extension as chief secretary, has gone to Rajbhavan for the governor’s signature.

The Right to Squabble

And the result is the people have lost because the one man that RTI activists wanted her to oppose, has been appointed to replace S Ramakrishnan. RTI activists who were invested in seeing that Sripathi was not appointed because “he had worked against RTI in the past” had a meeting with her. They handed over papers, including the affidavit filed by Sripathi challenging the order of the state information commission directing the government to disclose details as to whether IAS and IPS officers had disclosed their assets.

“She had read the representations we sent before we met her but still she listened to our points patiently and said that she understood our concerns and would do her best on the issue,” said V Madhav of Association for India’s Development, one of the three RTI activists who met the AIADMK chief. Others in the group were Nityanand Jayaraman, independent journalist and researcher, and K Saravanan of Corporate Accountability Desk. Madhav added, “We told the opposition leader that it was when Sripathi was the vigilance commissioner that Tamil Nadu Vigilance Commission (TNVC) pushed for the exemption of directorate of vigilance and anti-corruption (DVAC) and TNVC from the purview of RTI Act.”

The RTI activists, who have already sent petitions to the government and CM, were also concerned by the lack of transparency in the selection process, pointing out how Sripathi was the chosen one. Basically a sinecure for an officer who had served the ruling government faithfully.

The almost meeting between Karunanidhi and Jayalalitha followed a well worn script. After their long running innings in films, one would think that they would think it’s time to vary the script to make it interesting. And the CM is a script writer who has earned lakhs. Incidentally, he has made it clear that all those lakhs have been donated.  In 2004-05, he earned Rs 11 lakh from the screenplay of Mannin Maindan and Rs 10 lakh for Kannamma  which he gave towards the tsunami relief fund. He got his son, then just MLA but currently the deputy CM, M K Stalin, to hand it over to the then CM Jayalalithaa. In 2008, he earned Rs 25 lakh (which came down to Rs 18 lakh after he paid tax) for his film Uliyin Osai, which he donated for the welfare of film artistes. He has long been accused of going the extra distance for films because of his kin’s links with the Tamil industry (two grandsons Udayanaidhi Stalin and Dayanidhi Azhagiri are producers, Arulnidhi Tamizharasu has just debuted as an actor, Perumal Muthu is a playback singer). In fact he laid the foundation stone for Kalaignar Nagaram which will contain multi-storeyed apartments for the film industry on 96 acres in Payanoor on the outskirts of Chennai while saying his bonds with the film industry are “unbreakable”.

In a question-answer format he employs sometimes while writing in the DMK organ Murasoli, the CM said his philanthropy includes donating all the money he had received as gifts to the CM’s Fund and other trusts such as the Kalaignar Karunanidhi Trust. The trust disbursed Rs 1.72 lakh to 2,049 persons in monthly instalments to the needy. The CM even instituted Porkizhi award for scholars and so far 17 scholars have been provided Rs 1 lakh each.

He even referred to his donating his Gopalapuram house after his and his wife’s lifetime to the Annai Anjugam Trust to start a hospital for the poor. Speaking of his donating the house (which his sons Stalin, Azhagiri and Tamizharasu stood to inherit and signed away after their father announced he would donate it), daughter Kanimozhi made an impassioned speech in the Rajya Sabha some weeks ago about how hospitals should not come up in residential areas. They should be allowed to come up only after being given a license which itself should depend on vetting by experts and environmentalists. But catty political detractors felt he was using his daughter to stop the house, valued at Rs 8 crores today which he bought in 1955, going out of the family’s hands.

Vijaykant Can Dole it Out

Vijaykanth, who turned 58 on August 25, has gone high profile after lying low since the Lok Sabha election where his party, the Dravida Murpoku Munnetra Kazhagam (DMDK) marginally improved its vote share to 11 per cent after its impressive 8.33 per cent in the 2006 assembly election where it debuted. If Karunanidhi was complacent that none could match his cutting remarks about opposition leaders – sometimes Jayalalitha’s comebacks border on the juvenile – he had not factored in Vijaykanth, who may have made a career out of dialogues written for him, but is no novice when he has to make impromptu jibes.

He was dismissive about the CM’s comment that he evaded income tax by taking his acting fees in “black”. “It is a very old allegation that the CM even unsuccessfully levelled at former CM MG Ramachandran and ended up earning people’s wrath,” said Vijaykanth who projects himself as the “karuppu MGR” (Black MGR).

But referring to Karunanidhi’s remark that he should look in the mirror (which was the CM’s response to the DMDK’s chief calling his party a “corrupt” force), the Captain was unsparing : “I am an actor and my profession compels me to look at my face while putting on make-up. Has Kalaignanr forgotten this?” And then came the killer-comment, “It is not a big thing to see your face in the mirror. The point is whether people want to see your face. I can say that lakhs of people are eager to see my face. But in the case of some others, people don’t want to see their faces even if money and biryani packets are offered.”

And he concluded with this loaded insult: “In the past 25 years, I have spent much of my income from films on charitable work. But in total contrast, and by his own admission, Karunanidhi donated his earnings for the first time in 2005, a full 55 years after coming into public life.” Ouch!