It looks like even US President George Bush will get to see Dasavatharam. The film-makers have approached Lousiana governor Bobby Jindal to do the needful. A Tamil film in the White House? Kamal Hassan sure goes places.

Prices And Politicians
Most people believe politicians are out to loot them and that while they suffer through inflation and the hike in fuel prices, most politicians would be living a life of luxury. There's a lot of truth in the saying that politics is the last refuge of scoundrels. My maid says it's been a while since vegetables have been bought in her house that includes her son, daughter-in-law and their two children. It's unaffordable, she says and they settle for one drumstick (which costs four rupees as against one rupee earlier) so the sambar at least has some flavour. "It's not just me, there are thousands like me," she says. It must surely be galling for people like her that TN MLAs have got a hike of Rs 5000 per month from their earlier salary of Rs 25,000. The generous finance minister K Anbazhagan even announced hikes in pension to former legislators. Then CM Karunanidhi satisfied another wish list and increased the MLAs Constituency Development Fund from the present Rs 1.2 crore to Rs 1.5 crore and added that jeeps would be provided to all MLAs at a total cost of Rs 12 crore. At least nobody listened when Congress MLA C Gnanasekaran asked for a salary of Rs 63,000 and two grounds of land for each member.

Politicians Have Deep Pockets?
It's something one has always sniggered about. When politicians are robbed -- and many have had their wallets and watches stolen in the thick of crowds -- it hardly ever evokes sympathy. Just the other day, Paramasivan, former union secretary of the DMK from Namakkal, went to wish party chief Karunanidhi for his birthday and came back Rs 20,000 lighter. 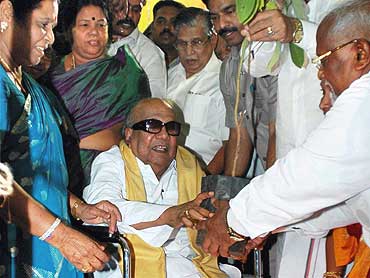 Karunanidhi planting a sapling on his 85th birthday

The Kalaignar attracted humungous crowds at his Gopalapuram, CIT colony residences and at Anna Arivalayam, the DMK headquarters. And in the melee, the light-fingered made merry. The Royapettah police received a bunch of complaints that day and one of them was from Paramasivan. Before you ask "what was he thinking?" let me assure you that Paramasivan had no intention of taking so much moolah (which apparently was actually meant to be returned to a friend he had borrowed it from) to the birthday bash. But party cadre from Namakkal dragged him along -- after all it's important to be seen even if you lose an arm and a leg. So Paramasivan went inside and when he came out, his dhoti was torn and his money gone.

As someone said, never has there been such a queue of IAS and IPS officers to wish the CM. There was Chennai's efficient municipal commissioner, Rajesh Lakhoni, who went in with two mobile phones clutched in his hand. When he came out, he had only one. In his complaint to the police, Lakhoni said the stolen mobile cost Rs 16,000. Pick-pockets are great levelers!

Goodies On A platter 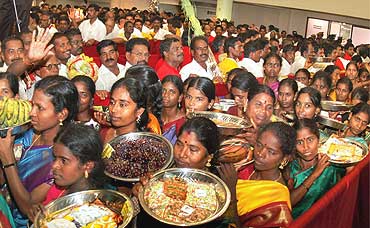 DMK patriarch M Karunanidhi may not have got three cheers from his sons Stalin and Azhagiri on his 85th birthday as their feud burst out into the open. But he got many rounds of applause for the gift he handed out literally on a platter on his birthday. Perennial breakfast favourites like idlis, dosais, vadais, pongal and coffee/tea have been ordered to sell for 10-15 per cent less. And a meal will now cost Rs 20 after food minister A V Velu arm-twisted the Tamil Nadu Hotel Owners' Association so that the DMK can puff up its chest when general elections come next year. The good news is that for the moment at least idlis, dosai, etc continued to be as big and neither has the taste been compromised. But for all the rah rah from the DMK camp, the common folks are not happy. "What is being offered as a low priced meal is actually a low weight meal," griped a customer upset that he did not get second helpings of poriyal (vegetables) and kootu (a kind of dal). Ah well, you can't win them all.

Taliban Vadai Anyone?
Naming an idli after former reigning goddess in Kollywood Khushboo (because it was puffy and soft) or a dosai after current reigning queen Shreya (because it is crispy and crunchy) may not be politically correct but it was meant to flatter. But what does one make of Taliban Vadai which apparently looks like a bonda and has pointed ends all over its body that makes it resemble Osama Bin Laden's beard? Wouldn't George Bush love to make a meal of this?

All Set For Dasavatharam
To ensure that no more legal hurdles hit his Rs 60 crore Dasavatharam, which releases on June 13, Producer Ravichandran has filed a caveat before the Supreme Court. By filing the caveat, the producer has ensured that the International Sri Vaishnava Dharma Samrakshana Society and Kalyana Suba Society, whose PILs were rejected last week by the Madras High Court, don't approach the Apex Court in appeal. The Vaishnav Society had opposed the release of the film on the ground that it portrayed saint Ramanujam in poor light and that it incorrectly detailed violent clashes between Saivites and Vaishnavites. The Kalyana Society wanted the censor certificate revoked saying the title Dasavatharam -- which refers to the ten incarnations of Lord Vishnu -- would hurt religious sentiments. Producer Ravichandran had told the court that the film had no scene of clashes between the two groups. On the use of the title, the judges said, "Nobody can have any objection for the use of the title as there is no intellectual property or copyright over the title."

Jackie Chan came for the audio release and it looks like even US President George Bush will get to see the film. As Ravichandran of Aascar (he had to change it from Oscar) says, "As Kamal Hassan plays the role of George Bush, we thought it would be appropriate to show him the movie." They've approached Lousiana governor Bobby Jindal to do the needful. A Tamil film in the White House? Kamal Hassan sure goes places.
For in-depth, objective and more importantly balanced journalism, Click here to subscribe to Outlook Magazine