The biggest advantage the Indians had was the former Australian captain's ability of being an excellent reader and analyser of the game as compared to Woolmer, who lacked the hardcore experience of match pressures. 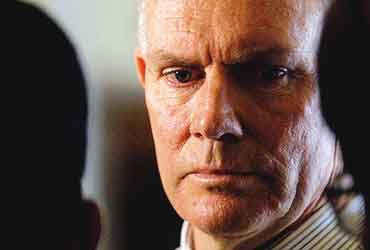 It is difficult to compare the roles of Indian coach Greg Chappell and his Pakistani counterpart Bob Woolmer during the recently concluded series. Pakistan won the Test series and India won the one-dayers.

To me, it was Rahul Dravid who inspired the revival of Indian cricket on the tour while Inzamam-ul Haq and his men were simply not up to mark in the one-day arena. But what was obvious was that the Indian team was more innovative and willing to gamble and experiment, be it reshuffling batting or bowling changes, rather than Pakistan who played stereo-type cricket and were shy of trying something different.

I believe the biggest advantage the Indians had with Chappell was the former Australian captain's ability of being an excellent reader and analyser of the game as compared to Woolmer who may be an experienced or seasoned campaigner but lacked the hardcore experience of match pressures or tensions.

Chappell, himself one of the greatest batsmen, had that vision and understanding that helped Dravid to finetune game plans or team strategies against a certain player during the course of play. Needless to say that match strategies are jointly prepared by the captain and the coach considering the strength of the opponent and the conditions in which the match is being played.

I also think that Chappell was more effective in the one-day series because his dressing room communication with the players improved after Sourav Ganguly returned home following the Test series.

The animated discussion prior to the start of the first Test between Chappell, Dravid and Ganguly was a perfect example of the lack of communication between the trio and also reflected the dressing room mood.

I have all the reasons to believe that Ganguly's conduct in the dressing room would have been exemplary but the bottomline is that if the coach is uncomfortable with the presence of a certain player, particularly with the stature of Ganguly, it affects his input and consequently his output.

When we talk about India's performance in one-day cricket, naturally fielding has to take precedence over everything and it would be fair to say that the credit for that transformation has to go to Chappell.

Fielding is basically improved by the individual himself but the drills and exercises that are required to enhance and improve the performance, have to come from the coach and I think Chappell did wonderfully well in that area.

From my personal experience, I can say with conviction that Woolmer organises excellent team meetings and takes feedback from every player. He gives a patient hearing to each player and tries everything within his means to bail him out of the crisis.

But at the same time I also believe language is the biggest barrier between Woolmer and the Pakistan players which is certainly not the case with the Indian team.

Even though cricket has a simple and universal language, fact of the matter is that the players and Woolmer cannot prolong the cricket debate. Our boys fall short of expressions and fail to fully express their problems and feelings that makes Woolmer's task even tougher. In a brain-storming session, you need to speak and understand the same language!

Woolmer has introduced technology in Pakistan cricket but how far it has been successful, I think only the current players can answer better. But the practical input of Javed Miandad during his tenure was superb. I mean, Miandad was spending no less than three to four hours at the nets just throwing balls to the batsmen.

Inzamam and Mohamamd Yousuf still appreciate Miandad for helping them overcome the bad patch in New Zealand and in the home series against England in 2001.

However, the main difference Woolmer has created in the team is that he, along with Inzamam, has made the boys mentally tougher. There is more self belief in the boys, that comes naturally with success.

But unfortunately, Woolmer has not truly justified the designation of a coach as we still see Salman Butt being caught in the arc behind the wickets while flashing and Shoaib Malik being caught at short-mid-wicket and short-extra-cover.

Yousuf's running has not improved either. As I said earlier, these boys have caught wrong habits at a very early stage of their careers and we all know bad habits take ages to go. Unfortunately, sportsmen have a limited time.

After the team's poor fielding in the one-day series, the Pakistan administration wants a fielding coach. I think it's a joke because it's up to the individual himself to improve his fielding. If Jonty Rhodes is being targeted, why not collect his fielding videos and circulate the copies to all the players so that they see, learn and improve.

Furthermore, there is talk of a bowling and batting coach for the senior squad. I see this as another mind-boggling decision because at this level, you do not need any coaching. Yes, these can be an integral component in the National Cricket Academy, the PCB decides to make it operational.

And if batting and bowling coaches are required, why not a wicketkeeping coach or openers' coach? Too many cooks spoil the broth. That's what we did in 2003 World Cup and lets hope we do not make the same mistake again.

I also believe that two strong cricketing personalities cannot run the team. We had some problems when Aamir Sohail and  Miandad were at the helm or when Miandad and Wasim Akram were together or even when Miandad and Inzamam were there.

India had their own share of controversies with the most recent being the spat between Chappell and Ganguly that apparently has ended the career of India's most successful captain.

Similar were the problems in the West Indies when Vivian Richards took over. The argument to that is very simple and straight: clash of personalities and egos.

Australia, who are the benchmark for any cricket playing nation, have an excellent set-up for the grooming of youngsters and therefore, they have the relatively unknown John Buchanan as senior team coach who looks after everything except the happenings in the field.

What importance the Australians give to their junior cricket can be judged from the fact that a few years back they had Allan Border as their under-19 coach while Rodney Marsh is considered as the pioneer of the Australian Cricket Academy, whose, at least, nine cricketers are part of the present squad.

The job of the coach is thankless. The team wins, captains get the credit and when the team loses, coaches get the stick. It may be because that nowadays, the coaches, at least in the sub-continent, speak more than the captains and draw almost as much salary as the senior-most player, if not more.

Therefore, in my books the coaches pay the price for the publicity, exposure and importance rather than the team's failure because that's the responsibility of the person leading the team on the field instead of the one sitting in the dressing room.