President Donald Trump said that he had approved a request to declare the fires in California a major disaster, making people affected eligible for various types of federal government support. 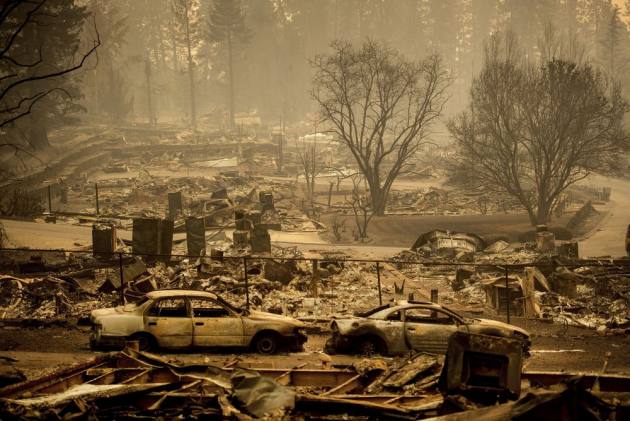 The three raging wildfires in California have killed 44 people since it started last week, a record number of deaths from a wildfire in the US state, officials said.

The dead were found in burned-out cars, in the smoldering ruins of their homes, or next to their vehicles, apparently overcome by smoke and flames before they could jump in behind the wheel and escape. In some cases, there were only charred fragments of bone, so small that coroner's investigators used a wire basket to sift and sort them.

Of the 44 people killed, 42 died in Northern California's Camp Fire, while two others were killed in the Woolsey Fire in Malibu, Butte county Sheriff Kory L. Honea told the media on Monday night.

Honea said more than 200 people remain missing in and around the wooded town of Paradise in northern California, which sits in the foothills of the Sierra Nevada and was popular with retirees, The New York Times reported.

The Camp Fire which broke out in Paradise on the morning of november 8, has already burned about 117,000 acres, destroyed 6,453 homes, and was only about 30 per cent contained.

"My sincere hope is that I don't have to come here each night and report a higher and higher number," Sheriff Honea said.

Camp Fire, which continues to rage in the hills and ravines east of the city of Chico, is also the most destructive fire in California history, with more than 7,100 structures destroyed, most of them homes.

Meanwhile, an estimated 435 structures have been destroyed in the Woolsey Fire west of Los Angeles, up from the 177 figure provided on Sunday night.

Another 57,000 structures were believed to be under threat.

The blaze, which is 30 per cent contained and has charred more than 90,000 acres in communities like Malibu and Thousand Oaks.

The third blaze known as the Hill Fire has ripped through 4,500 acres in Ventura county. It was 85 per cent contained as of Monday, according to Cal Fire.

President Donald Trump on Monday evening said that he had approved a request to declare the fires in California a major disaster, making people affected eligible for various types of federal government support.

According to the National Weather Service, weather conditions were forecast to worsen in Southern California, where the Woolsey and Hill Fires are raging, The New York Times reported.

Much of that region will face critical fire weather conditions through Tuesday afternoon, with low relative humidity, no rain and a high-wind warning in effect for the mountains, it added.

The strong winds propelled a new brush fire in Simi Valley on Monday morning, which quickly spread to cover about 105 acres before firefighters brought in under control.

More than 8,000 firefighters statewide were battling wildfires that destroyed more than 7,000 structures and scorched more than 325 square miles (840 square kilometers), the flames feeding on dry brush and driven by blowtorch winds.

In Northern California, fire crews still fighting the blaze that obliterated Paradise contended with wind gusts up to 40 mph (64 kph) overnight, the flames jumping 300 feet across Lake Oroville. The fire had grown to 177 square miles (303 square kilometers) and was 25 percent contained, authorities said. Winds were expected to weaken on Monday night.