The Burdwan blasts probe is said to be unearthing a complex terrorist network being funded by sources in several countries, including Bangladesh, Pakistan, Dubai and Saudi Arabia. 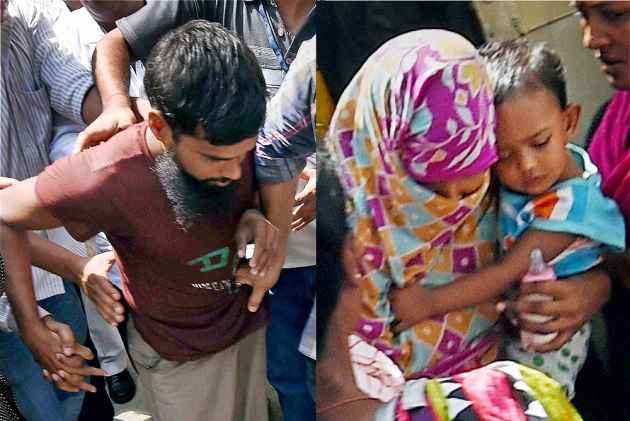 If terrorists tend to target holidays, October 2 was a day packed with celebrations in the state. Not just because it was Gandhi’s birthday but it was also Oshtomi, which marked the most auspicious day in the five-day Durga Puja festival. No wonder at first, the bomb blast in West Bengal’s Burdwan was thought to be a terrorist attack. But it was not. It was an accidental blow up.

This makes it much more significant. Because it explains why Calcutta and Bengal have largely been spared terrorist attacks. Calcutta and Bengal are, it would seem, used as a breeding ground for terrorism. The accidental bomb blast seems to have blown the lid off the terror network that has been thriving in the state right under the nose of the administration.

A loud explosive sound shook up the semi-urban neighbourhood in Burdwan around 100 kilometers from Calcutta. Neighbours first thought a cooking gas cylinder had burst. But when they rushed to the two-storey house, two women appeared at the iron gate on the ground floor, locked it from inside and told the crowd to back off.

"We had gone there to help so we were taken aback by their aggressiveness," said a rikshaw- puller. Blood was gushing out of the drains. The two women apparently told them that they had been skinning chickens.

Finally, the police were called. The women refused to open the gates. Police had to break it open.

What they found inside was:

The two women were arrested (both have a child each who has gone to jail with the mothers). Their interrogation is said to be unearthing a complex terrorist network being funded by sources in several countries, including Bangladesh, Pakistan, Dubai and Saudi Arabia.

If this was not cause enough for concern, questions have been raised about the role played by the state government and police.

State police had the bombs found in the room detonated (taken down to the riverside and made to explode) rather than defused (which would have saved evidence of the makers of the bombs, making identification of the terror group easier). Why? Was there something to hide?

State police claim that this was standard operating procedure (S.O.P.) but detonation is reportedly only preferred over diffusion when there is imminent threat of explosion, which was not the case as is evidenced by the fact that the bombs were detonated over a period over 24 hours, not marking any urgency.

Why also did members of the ruling party oppose an investigation by the National Investigation Agency (NIA), which is better equipped to investigate international terror networks in the country?

Many questions have been raised: Is it because the state government was caught napping or did it in some way play into the hands of such groups? Was there any quid pro quo? Did such groups come in handy in any way, say for instance, in providing votebanks from across the borders?

The NIA which moved in, brushing aside state objections are all set to get to the root of it.

Responding to an Outlook question about whether there is full cooperation from the state police and government, a spokesperson said, “There are no issues.”

We visited the madrassa in Shimulia, a village in Burdwan where the two women arrested in connection with the bomb blast last week said they had undergone training in arms. A tiny cluster of mud huts with thatched roofs in the midst of an expanse of green paddy fields. The local villagers who spoke to us revealed that the madrassa had come up a few years ago and none of the students (all girls) were from this village.

“They used to be transported here in cycle vans from far off places like districts in Nadia and Murshidabad. They were not allowed to come out of the rooms or speak to us.”

Villagers claim that that the local girls and boys all go to government schools and not to madrassas. “You need money to study in a madrassas. At least Rs 600 to Rs 1,000 per month. We don’t have that kind of money. Training in madrassas is supposed to teach you religion and the languages including Arabic and Urdu. But we are shocked to hear that they were being trained in such activity,” said Taslima Bibi of Shimulia village.

West Bengal was not on high alert about cyclone Hudhud. But cyclone Aila which had created havoc in the Sunderbans several years ago, taking many lives and destroying hundreds of homes, is still so fresh in the minds of people of that region that few were willing to take chances.

“We were told that only Andhra Pradesh and Orissa would be affected,” said a fisherman, who was a young boy when the Aila struck, blowing away his own home. “I have seen with my own eyes the fury of the storm. I saw the sea swallowing my house. It was a dreadful experience. Now news of another approaching storm anywhere in the vicinity makes me rush further in to the shore.” On the day Hudhud ripped through the coasts of Andra Pradesh and Orissa, Bengal was merely overcast reporting only light showers and drizzles, but as they say, once bitten twice shy.

Par For The Course

The Jadavpur University Vice Chancellor’s refusal to step down, in spite of large scale protests demanding that he do so, is typical of the times. Those holding high office are increasingly refusing to take responsibility for wrongs being committed under their charge. “Hold onto power at any cost” seems to be the new motto. Forget duty, forget conscience. In fact, what do you expect from someone who gets cops to forcible evict students protesting a heinous crime inside their hallowed educational institute? A resignation would be so out of character that the cynical response is to wonder if it was futile to demand it, to start with.

Writing on the Wall

“ki poriborton aanley kaka…bajar geley pocket faka” (What kind of change have you brought, uncle? A visit to the market means an empty pocket).

Clearly, no change in the price-rise situation is top of the mind for most.

Edited, October 19, 2014: Because of a typo, the word 'defused' appeared as 'diffused' in an earlier version of this article. We thank those who wrote in to point out the error which has been corrected.