The MSP has been increased according to the recommendations of farm advisory body CACP and is in line with the government's announcement to provide farmers a 50 per cent profit over the cost of production. 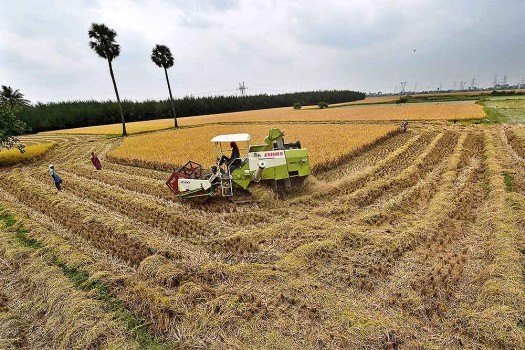 The government Wednesday announced a 6 per cent hike in wheat support price to Rs 1,840 per quintal and up to 21 per cent increase in other rabi crops, a move that will give farmers Rs 62,635 crore additional income and help contain their simmering discontent over high input cost and low returns.

The decision comes a day after a huge protest by farmers in Delhi NCR to seek high support prices and loan waiver.

Few months back, the government had announced higher MSP for Kharif (summer) crops, to fulfil its promise of giving farmers 50 per cent more price than their cost of production. These measures are aimed at addressing farmers discontent ahead of upcoming assembly polls in key farm states and general elections next year.

Agriculture Minister Radha Mohan Singh said MSPs for all Rabi crops are higher than the cost of production ranging from 50-112 per cent.

"The farmer friendly initiative will give additional return to the farmers of Rs 62,635 crore by way of increasing MSP of notified crops to at least 50 per cent return over cost of production and will aid in doubling farmers’ income," an official statement said.

For barley, the cost of production is Rs 860 and MSP is Rs 1440, giving a return of 67.4 per cent. In case of safflower, the MSP has been fixed 50 per cent higher than the production cost.

The support price has been increased based on the recommendations of farm advisory body CACP (Commission for Agricultural Costs and Prices).

"With the new Umbrella Scheme “Pradhan Mantri Annadata Aay SanraksHan Abhiyan’ (PM-AASHA) announced by the government there is a robust mechanism available to enable farmers realise the MSP in fuller measure," an official statement said.

"Government has decided to give an additional guarantee of Rs 16,550 crore making the total government guarantee Rs 45,550 crore. In addition to this, budget provision for procurement operations has also been increased and Rs 15,053 crore is sanctioned for the implementation of PM-AASHA," it added.

The central and state procurement agencies like Food Corporation of India and NAFED would continue to provide price support to farmers for the Rabi crops.

To address distress in the farm sector, the government had in July increased the paddy MSP by a record Rs 200 per quintal and gave a steep hike in other Kharif (summer-sown) crops.

Last month, a Rs 15,000 crore scheme was announced to ensure that farmers get MSP.

That apart, the Centre has announced several steps in last one year to help sugarcane farmers and cash-starved sugar sector which is facing a glut situation because of record production.

Last month, a Rs 5,500 crore package for the sugar industry was announced that included over two-fold jump in production assistance to cane growers and transport subsidy to mills for export up to 5 million tonnes in the marketing year 2018-19.

In June, the government had announced a Rs 8,500-crore package for the industry, which included soft loans of Rs 4,440 crore to mills for creating ethanol capacity. The price of ethanol produced directly from sugarcane juice for blending in petrol was also raised by more than 25 per cent hike in a bid to cut surplus sugar production and reduce oil imports.