Vivo V23 Pro Review: Clearly, A Smartphone For Selfie Lovers But A High-Priced One At That

The V23 Pro continues the V-series spirit by offering a game-changing design (a colour-changing rear panel, which I didn’t get to test out), capable hardware, and a new-and-improved 50MP dual-selfie camera setup.

More from Sahil Bhalla
View All

Vivo, since being launched in India, has disrupted the smartphone market segment in more ways than one. Apart from delivering multi-feature phones, it ensured that the phones were pocket-friendly. Its X70 Pro+’s camera was touted by many as one of the best for any Android smartphone for 2021. It was very well-regarded in terms of build quality and hardware performance as well.

The mid-range segment, dominated by the likes of Xiaomi & Samsung, hasn’t been so kind to Vivo though. Last year, the company introduced the V21 series that was targeted at consumers obsessed with selfies. Sadly though, the phone just didn’t fly.

Vivo is, however, hoping to change the game with this year’s first launch, the Vivo V23 Pro 5G and the vanilla V23. The V23 Pro continues the V-series spirit by offering a game-changing design (a colour-changing rear panel, which I didn’t get to test out), capable hardware, and a new-and-improved 50MP dual-selfie camera setup. 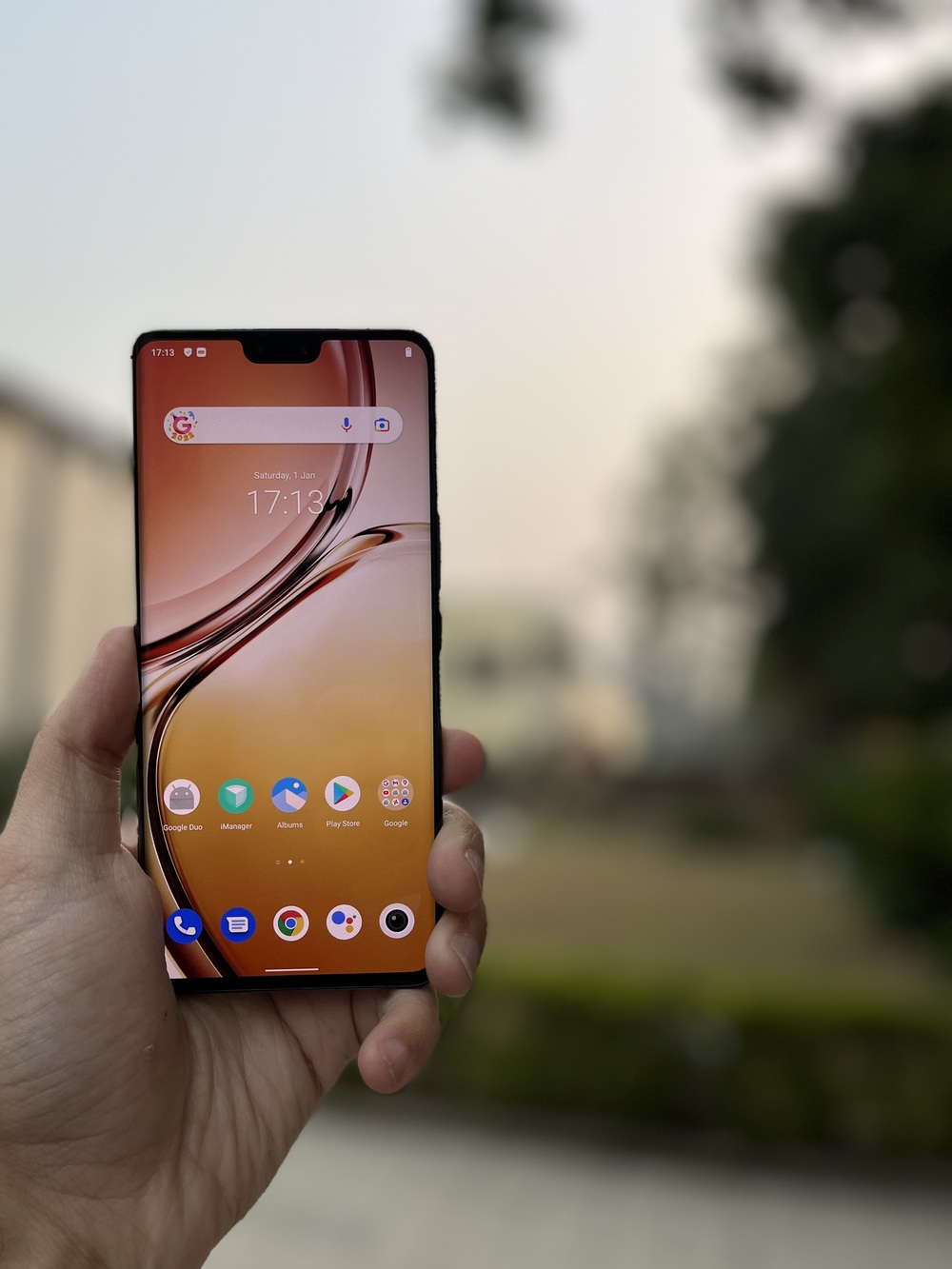 But is all that enough to change the fortunes of Vivo in the mid-range segment? Let me throw some light on that -- I’ve been using the smartphone for over a week now.

Design: Colour-changing USP only available in one of the two colours

But the Stardust Black has me impressed. With the soft-touch matte finish, the smartphone is both good to look at and great to hold. Vivo has done a commendable job with the weight distribution as this is one of the slimmest phones in the Indian market today.

There’s a huge notch (containing the dual-selfie camera setup) that I thought was more of a nuisance. Most of the consumers will be okay with it, but in 2022, they shouldn’t have to put up with it.

The V23 Pro features a glass back, while the sides are made of plastic. There’s a bottom-firing speaker, a Type-C charging port, a dual-SIM slot, volume rockers and a power button on the bottom and the sides of the smartphone. One wishes that Vivo had used the earpiece as a second speaker and delivered stereo speakers but…

The Vivo V23 comes with a 3D curved screen on the front. It’s a 6.56-inch AMOLED display (with an 18:10 aspect ratio) that offers a 90Hz refresh rate. In a world of 120Hz smartphones, even in this price range, it’s a shame Vivo didn’t upgrade to one.

Still, I didn’t face any issues with the display. It gets bright enough for outdoor usage and is crisp while indoors. The auto-brightness is an issue though, one that is shared by some of its competition. At times, the brightness doesn’t move with respect to the changing lighting inside the house, and at times it takes it down to the lowest possible setting where you just can’t read anything.

Thanks to being an AMOLED display, deep blacks are on offer. This translates into a wonderful experience when consuming TV shows or movies. The curved sides add to the immersive viewing experience. 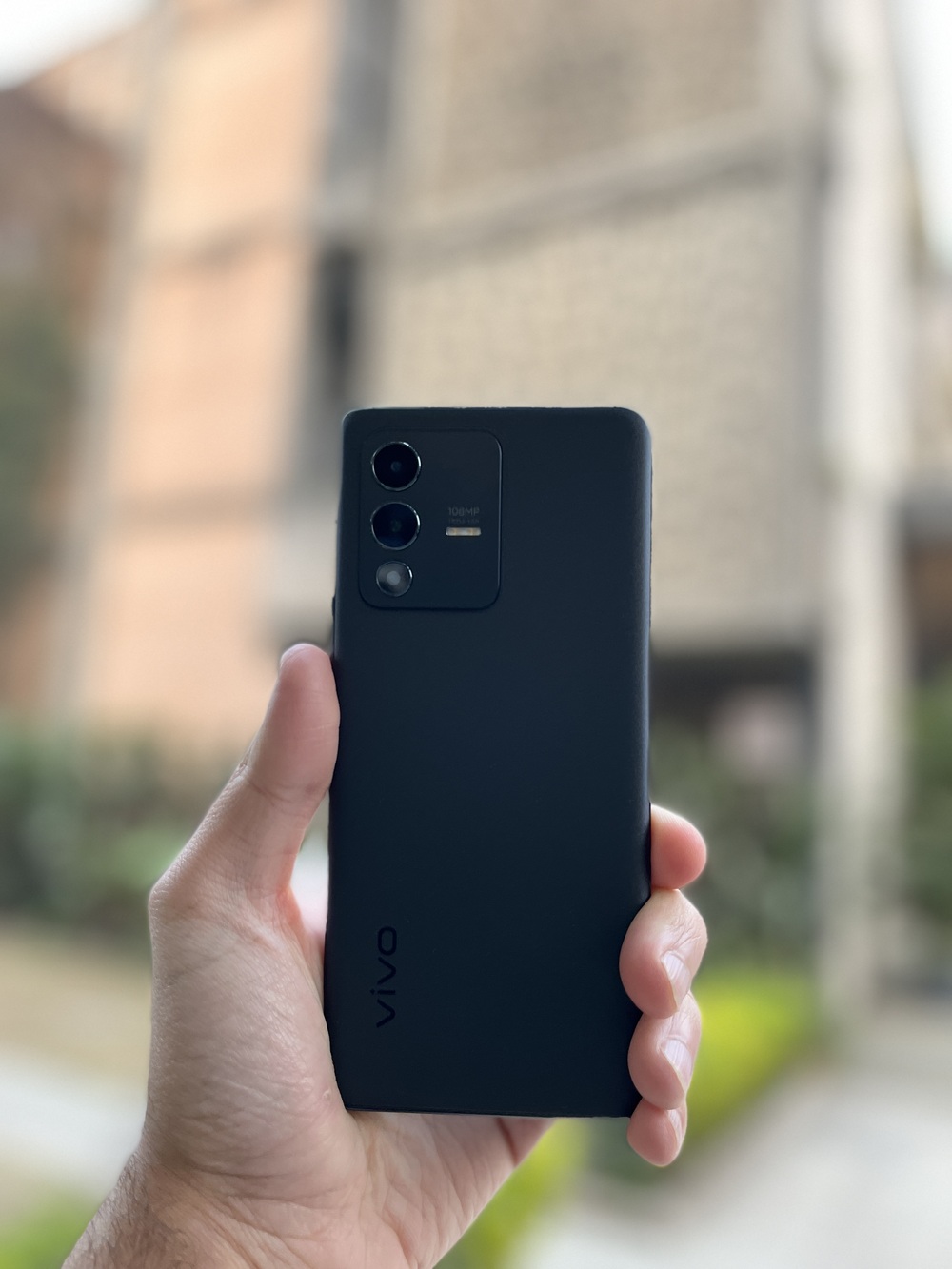 Lastly, I did not face any issues with accidental touches, despite the curviness of the smartphone display.

MediaTek’s Dimensity 1200 processor is one that is tried and tested. It’s a value-for-money SoC and one that doesn’t fail to impress. This is a processor that can be found in the OnePlus Nord 2 as well.

In my day-to-day usage of clicking photos, playing casual games, taking down notes, scrolling through social media feeds and responding to emails, I faced zero issues with any lag. Yes, the phone did get warm during my extended gaming session, but not nearly hot enough to alarm anyone. The breezy multitasking nature of the V23 Pro is thanks to UFS 3.1 storage and LPDDR4x memory that helps in reducing load times.

Like other Vivo smartphones out there, the V23 Pro runs Vivo’s own custom skin that is known as FunTouch 12. This one is based on Android 12. Vivo has done a good job in keeping its consumers updated with the latest and greatest of what Android has to offer.

Things like the redesigned notification and quick setting panel and mic access in-use indicator have been brought over by Vivo. Some of the personalisation features and smart control options though are missing.

The interface is fairly easy to master and despite the bloatware, looks quite clean. There’s a built-in screen and call recorder that consumers will appreciate as well as support for Dark Mode and the Always-On display.

As mentioned above, my usage was fairly heavy on a day-to-day basis. The 4,300mAh battery wasn’t good enough to last me till the morning. In fact, I had to sometimes plug in my phone well before my bedtime. I got an average of about 5-6 hours of Screen-On-Time (SOT). The device comes with a 44W charger. It charged the phone from 0-100 percent in under an hour. That’s speedy indeed.

Camera: One for the selfie-lovers

Let’s quickly run through the camera setup. The rear features a triple-camera array with a 108MP main sensor, an 8MP ultra-wide sensor and a 2MP macro sensor (that is best not used). The notch on the front houses the 50MP main selfie shooter accompanied by the 8MP lens that helps with wide-angle shots.

The smartphone is targeted at those that want a premium selfie camera and it totally delivers. Some of the selfies that came out were outstanding. To add to that, there are a number of beautification features embedded in the camera app. The low-light selfies were also excellent as the V23 Pro comes with a one-of-a-kind dual-flash array right above the selfie module, helping to improve the quality! Even portrait mode on the selfie cameras delivered brilliant photographs.

I was mighty impressed. For all those Instagrammers that need to take photos of themselves, or alongside their friends, the Vivo V23 Pro is for you.

On the downside, the rear cameras didn’t live up to all the hype. Having tried the X70 Pro+, my expectations were higher than they should have been.

The photos from the main sensor were decent, but nothing Insta-worthy. The shots came out looking more natural than some of the competition out there but it lacked that pop we’ve all come to like in the recent months gone by. We all need some extra colour in our lives and the camera lacked that.

In fact, take a shot with the ultra-wide lens and you’ll notice a distinct lack of detail. Shots using the Night Mode are another step behind. The exposure may get bumped but the resulting photos lack even more details.

I’ll start with the things I liked about the smartphone. The soft-touch matte finish is great to look at and feels good to hold in the hand. Though a good party trick, I feel that the colour-changing back will get old pretty quickly.

The slim body and curved display make for a premium device. The notch, though bothersome to me, is offset by the fact that the selfie cameras in there are absolutely fantastic.

If you click a lot of selfies and want a smartphone that stands out of the crowd (maybe pick the colour-changing Sunshine Gold variant then), then the V23 Pro is the smartphone
for you.

All that said, the competition in this price range is pretty strong. There are a number of feature-rich devices back by Qualcomm’s Snapdragon 888 processor and come with a display that features a 120Hz refresh rate and excellent battery life. One smartphone that comes to mind is the iQOO 7 Legend.

There are also some recently launched and upcoming smartphones that one may consider. Xiaomi’s 11i Hypercharge launched a few days ago and the OnePlus 9RT is about to hit the market. If you’re looking for a well-rounded smartphone that offers more bang for the buck, then look away from the Vivo V23 Pro.

If quality selfies and a good looking smartphone in a slim package are things that matter to you, then I’d recommend the V23 Pro.

5G Scare: Why Air India Had To Cancel Its Flights To The US

Why Bajaj Finance Stock Price Is Shooting Through The Roof