Valuation Conundrum II: The Role Nifty’s Composition Has To Play

In the second part of a three-part series to understand what’s supporting the high valuations in the Indian equity market, we analyse how the composition of the Nifty affects the overall performance.

With the Indian stock market touching new highs every month, market practitioners who follow fundamental analysis before investing are confused. In this calendar year, 46 trading days witnessed new market highs but there has been no meaningful market correction (over 5%) despite high trailing price-earnings multiple and mediocre returns on equity.

However, fundamental valuation is just one piece of the market puzzle being followed by smart money. What are the other parts that solve the valuation conundrum for market participants? To begin with, the composition of the index is a key matrix that is keenly observed by market participants.

In India, there are two stock indices, the Nifty and the Sensex. The Nifty index is made of 50 stocks, while the Sensex has 30 stocks. To understand the performance of the stock market, a look at the index itself can be helpful.

In the past 15 years, the Nifty’s composition has changed drastically, and it has a huge bearing on the index valuation. In 2005-06, the bulk of the index value was coming from high capital intensive, high leveraged, old economy companies. Today, tangibles have taken a backseat and data-driven consumer-oriented financials and information technology companies with intangible assets like human resources and patented technologies are at the forefront in the index. 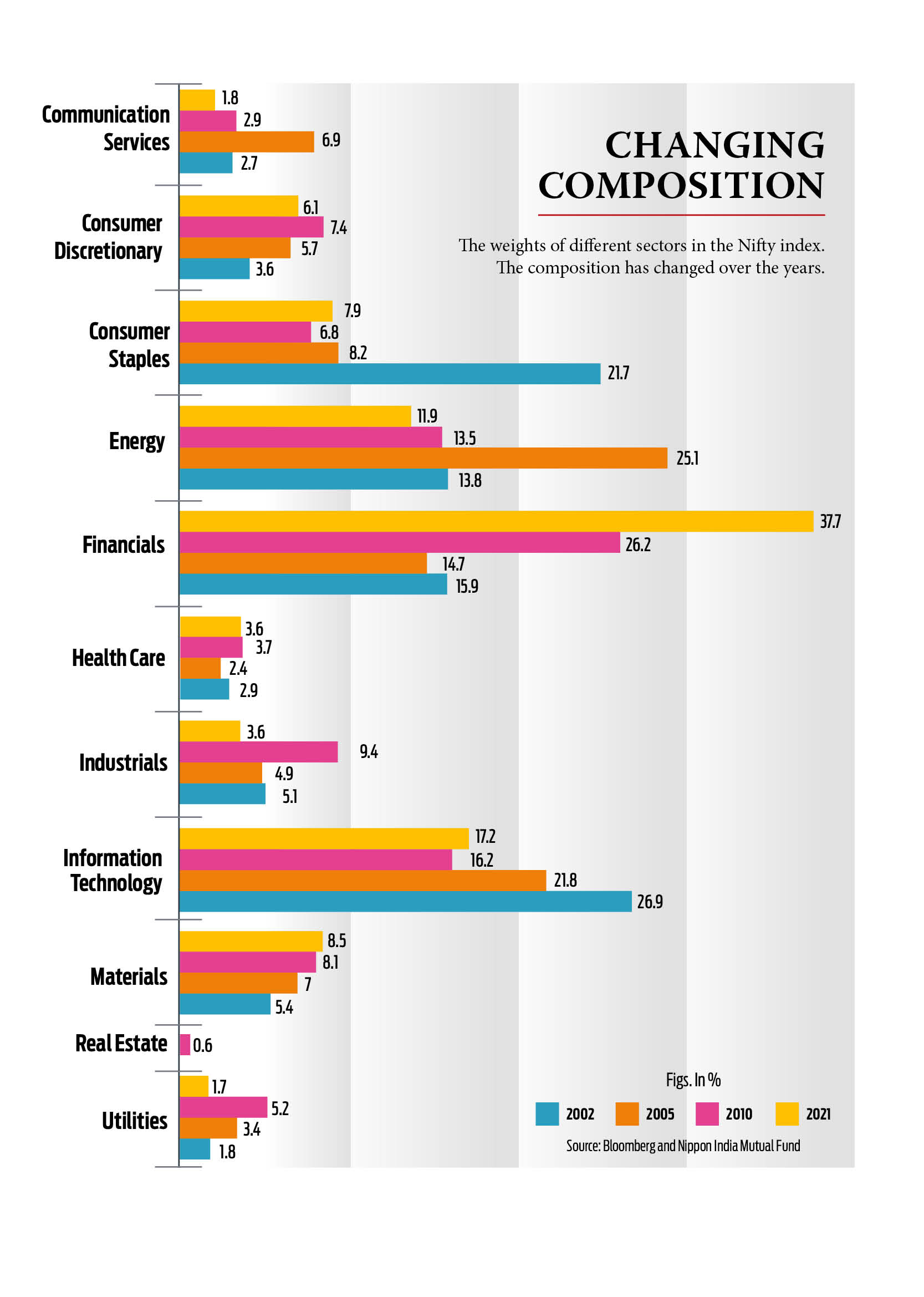 The valuation of the same index made with different compositions during two different time frames is not comparable. Each sector behaves differently as fundamental valuation parameters, such as return on equity (RoE), debt to equity, earning multiples and cash flow, vary hugely from one sector to another. So, any historical comparison of the Nifty on PE, RoE and other fundamental valuation parameters would not explain the reasons behind its phenomenal growth.

Speaking with Outlook Money, Ashutosh Bhargava, fund manager and head equity research, Nippon India Mutual Fund, says the index performance could not be properly explained if you ignore the composition.

“For better understanding of the market valuation and the resultant index performance, you need to take into account the composition effect of Nifty as sectoral mix can materially alter index valuations,” adds Bhargava.

Bhargava has a point as sectors such as energy, capital goods and infrastructure that used to have high index weightage in 2005 were all into cyclical businesses. Even financials, mostly public sector banks and to some extent private banks like ICICI Bank and Axis Bank, were majorly deriving value through corporate lending.

But now the bulk of the market value for financials is not coming from the cyclical business of lending but from non-lending businesses like insurance, mutual funds and credit cards. Even the asset profile (loan book) of banks is now more retail oriented which is less cyclical in nature. Thus, financials, which is a big part of Nifty, is getting higher earnings multiples, lifting the index in return.

Reliance Industries is another example where the cyclical petrochemical business has taken a backseat and consumer-oriented business of telecom and retail is deriving major value for the stock price. The share has gone up almost four times in the last five years.

So, are equities poised for a fall after such a stunning upmove? Maybe not, because equities are not as expensive when compared with the bond yields. In the US, 10-year bonds are yielding 1.5-1.55 per cent annually, while in India 10-year G-secs (government securities) are giving 6.3 per cent yield. On the other hand, the Nifty has moved up over 51 per cent in the last one year and over 11 per cent in the last three months (one quarter). Thus, low return provided by fixed-income instruments is also maintaining buoyancy in the equity markets, globally.

But how long will the party go on? Understandably, till the time other asset classes start giving meaningful returns to investors. “The opportunity cost of putting money into equities is favourable with a low risk-free rate in developed economies but once the risk-free rate or discount rate starts moving up, both on fundamental and flow basis, equities may become less attractive,” Bhargava said.