Covid Pumps Up Paycheques For Techies, Realty Reaps The Goodies

Covid Pumps Up Paycheques For Techies, Realty Reaps The Goodies

More from Neeraj Thakur
View All

Sagar Kumar left his home in Bihar some 15 years back when he moved to Delhi with a job at an electrical wire manufacturing unit. With careful spending and savings-oriented financial planning, the mid-level employee managed to accumulate some money over the years and planned to buy a house in Noida within Rs 25-30 lakh.

But all these were before the Covid-19 pandemic struck the Indian shores in early 2020. Soon after the nation went into the lockdowns, Sagar lost his job. He found another job after a few months, but this time, he had to take a cut of 25 per cent on his pay. Battered by the pandemic, Sagar shelved his plans of buying a home, and decided to keep his savings for exigencies unless the economic conditions turn favourable.

Sagar is one of the countless Indians who suddenly found themselves unsure of their future and decided to keep off any long-term investments. According to the Centre for Monitoring Indian Economy, over 10 million people lost jobs because in the second wave of Covid in India.

But there’s flip side to the Covid story. Sagar’s life and fortunes are in stark contrast with that of Abhijeet’s. The product manager at a start-up based in Bengaluru specialises in coding. His incomes shot up five times since March 2020 when the government declared the nation-wide lockdown to check the spread of the disease.

While most sectors of the economy stagnated because of the Covid contentment measures, technology went into a boom phase and coding specialists became one of the most sought-after professionals. Abhijeet has recently booked a home with a Rs 1.3-crore budget.

One of the biggest casualties of the pandemic over the last year has been the purchasing power of the lower middle class in India. With a large number of blue-collar workers losing jobs or having to work on reduced salaries, their capacity to spend has been deeply compromised. A similar situation is faced by small-scale entrepreneurs who have had to shut their businesses during lockdowns. On the other hand, people working in tech start-ups and IT and ITeS sector have seen their fortunes change for good, affecting the demand-supply scenario in the country’s real estate sector.

To put things in perspective, Indian start-ups raised $6.5 billion in funding across 160 deals during the April-June quarter of 2021. A large part of this fund is being utilised to acquire talent at astronomical costs, creating a class of young purchasers of premium properties in India.

“The lockdown had severely impeded people’s ability to make long-term financial commitment. As the last year progressed, we saw some solid measures from the government and the RBI that assured potential consumers of their financial abilities. These measures were topped by state government announcements to reduce stamp duties. Developers also offered rebates either directly or indirectly. However, the beneficiaries have been mostly from the mid and the high end segments who are financially more secure to make long-term investments,” said Gulam Zia, Senior Executive Director for Research, Advisory, Infrastructure, and Valuation at Knight Frank.

The government has been pushing for affordable housing greatly since 2015. The Pradhan Mantri Awas Yojna offers a subsidy of up to 4 per cent on the interest payable on home loans to buyers from categories like low income group, mid income group and economically weaker sections. High interest rates and high cost of properties have historically kept urban areas out of bounds for home buyers from these segments. Real estate developers, too, stayed off these segments because of low margins and high volume business in a country where price of land has appreciated astronomically over the last two decades.

The situation turned around over the last few years with the government pushing for affordable housing through various incentive schemes and a lukewarm business for developers from the economically upper strata with stagnated incomes.

The pandemic, however, brought about a complete change in the dynamics. Developers reacted fast to ride on the evolving trends and began focusing more on the premium segment of buyers. According to a report by property consultant Anarock, between first quarter of 2019 and second quarter of 2021, the launch of affordable housing projects came down from 44 per cent to 20 per cent. “Covid affected the livelihoods of affordable segment homebuyers,” the report said. 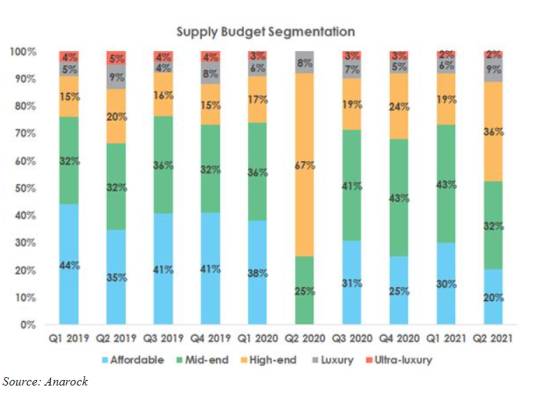 “The biggest impact of the pandemic was felt by people running or working for small businesses, affecting their ability to purchase a home in the affordable category. On the other hand, in the IT/ITeS sector, we have seen salaries going up along with allocation of ESOPs, which has created demand for premium homes that cost upwards of Rs 1 crore,” said Anuj Puri, Chairman and Founder of Anarock.

“Developers are responding to this demand and it reflects on the category of fresh products.”
As the pandemic redesigned the mosaic of realty space in India, there has been a renewed demand for holiday homes among affluent Indians. A large number of people with disposable incomes are now looking to purchase a second home. The search is more prominent in hilly areas.

“The pandemic has made people realise that they need a second property where they can go to relax or work from home. This has created a huge demand for homes in places like Haridwar, Manali, Kangra and Rishikesh,” said Sunil Bansal, Vice-President for Sales and Operations at Redefine Group. “A two or three BHK property costs anything between Rs 40 lakh and Rs 70 lakh, depending upon the location and the developer.”