The 'Indian way' of doing business, where crony capitalism cuts across party lines, and is not just limited to big players, has made this India’s most expensive election ever 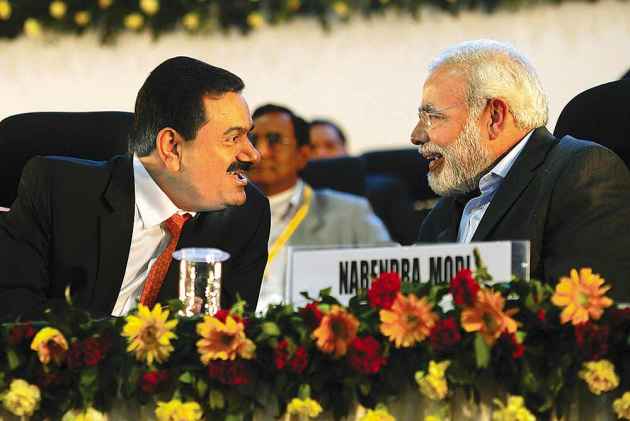 They say this is India’s most expensive elections ever, fuelled by seemingly endless amounts of corporate money.

Be it the Aam Aadmi Party (AAP), who have targeted Ambanis and Adanis, or Narendra Modi, who's named Naveen Jindal, or Rahul Gandhi, who has mentioned the Adanis, political parties are finally talking about the elephant in the room.

But is it just the big players—Reliance, Tatas, Birlas, Adanis, Jindals—who are thriving under political patronage and are now returning favour by providing huge donations to various political parties?

Of course, political funding by corporates is not restricted to any one party. It crosses the political divide depending on whether the company has presence in a state ruled by, say, a Congress, BJP, NCP, or BJD government. That is the nature of the beast.

Moreover, such close corporate relationships with political parties are more prevalent in certain sectors such as infrastructure or liquor.

“The interface between the state and corporate has taken new forms because of the kind of capital investment required—which is humongous— and there are more claimants than before,” says prominent business historian Raman Mahadevan.

Even so, a look at states across India shows that in the past decade, a few companies in particular witnessed spectacular growth. Even if some of this growth has clearly been fuelled through political association, many now argue that this is the “Indian way”.

"If crony capitalism leads to efficient operation and asset building, it is acceptable as the country benefits. One has to balance what has been given out and what has been the benefit to the country," says S.L. Rao, former director general of National Council of Applied Economic Research (NCAER).

Crony capitalism benefits politicians too. Consider the politically important state of Uttar Pradesh. The Sahara group, which enjoyed phenomenal growth under Mulayam Singh’s Samajwadi Party (SP) government, later faced the wrath of Mayawati government. Though SP is back at the helm in the state, the tide has turned against Sahara. Its chairman Subrata Roy is behind bars for defying SC court orders and falling foul of the financial regulators. Roy has been under the lens since 2004 about the source of his funding and phenomenal growth.

Others have managed tougher times. The late Ponty Chadha’s Wave Group continue to enjoy SP’s patronage post his violent death. Similarly, the Gaur family run Jaypee Group, which thrived under Mayawati’s regime, has reportedly paid the price and made amends to win back SP favour, say political observers. The infrastructure group continues to enjoy patronage beyond UP in Himachal, Punjab and Haryana.

In Haryana also a handful of business groups (with direct links to politicians) dominate the scene, be it in real estate, liquor, infrastructure projects, hospitality industry or, lately, even educational institutions.

In these businesses the top political families— the Hoodas or Badals— are involved directly or via benami holdings in the companies. The favoured among this lot is DLF, which hit the headlines for funding land deals of Robert Vadra, son-in-law of Sonia Gandhi; the Janta Land Promoters Ltd, the Piccadilly Group, among others.

Like in the north, southern states too have seen the emergence of crony capitalism with major players in construction and real estate in particular enjoying political patronage both from the states and the central governments. The corporate lobby is so strong that often project developers are able to acquire land far in excess of the requirement without meeting legislative norms of compensation or environment and other concerns. It goes without saying as many of the political leaders are stakeholders in these companies.

The story is the same whether it is Lanco Infrastructure, GMR Group or string of other companies like Lavasa, Paranjpe and Ceejay Group in Maharashtra, or Ramky Group and the Narayana Group of Andhra Pradesh.

Coinciding with the industrial boom in China, mining became a beacon for all seeking a foothold whether for exports or captive use of iron and other mineral resources including coal. Right from Jharkhand, Chhattisgarh, Orissa, Karnataka, Andhra Pradesh to Goa, political patronage has been closely linked with the growth of companies whether the Vedanta, Jindals or the Reddy Brothers of Bellary.

As RTIs and CBI probes have revealed, political favour has worked not just in the allocations of mines but also in the exploitation of natural resources with the regulating authorities turning a blind eye.

A political analyst observes that the trend of political patronage varies across states. For instance, in Karnataka political patronage is often given the guise of industry friendly policies to ensure no fingers are pointed and there is more scope to benefit both sides. This has applied to construction, IT, industries, and now is being exploited to the hilt in case of professional colleges— particularly medical, engineering and other technical colleges.

If under S.M. Krishna’s regime the IT sector was given the red carpet treatment in allocation of land and other infrastructure, including a say in policy making, during H.D. Kumaraswamy’s tenure the mining and construction lobby flourished. Currently, under K. Siddaramaiah, the push is to double the number of affiliated universities with an estimated Rs.2,500 crore riding on the proposal under the Rashtriya Uchchatar Shiksha Abhiyan (RUSA) of the central government.

Another common factor among many states is the sugar and liquor lobbies that work only for the benefit of the industries and the politicians. The nexus is so deep that policies are often tweaked to seem in favour of farmers and consumers when actually it works just the other way.

M.R. Venkatesh, political analyst, says the case of Tamil Nadu is different from other states as in place of crony capitalism there's a system akin to ‘cash and carry’ capitalism. Nothing works, not even political kinship, as there is a price for everything. “There is regime change every five years so there is no steady buildup of relationship. If you know how to manage the system then you don’t have to bother whether it is amma or anna,” says Venkatesh.

As the current election campaigning trends show, this time round the corporate biggies are leaving no stone unturned.