The jehad might be waning, but is it an inexorable process? Not as yet. The competence of India's pre-election counter-terrorism operations is pitted against Pakistan's covert services, and the Islamist terror groups created and supported by them.

Late last year, Bilal Ahmad Mir decided to undertake the most dangerous decision of his life: he volunteered to leave the comfort of the Hizb-ul-Mujahideen's (HM's) offices in Muzaffarabad, and take charge of a terror cell in northern Kashmir.

Mir's handlers at Pakistan's Inter Services Intelligence (ISI) Directorate armed him as best they could. He was given a legitimate Pakistani passport, AH0992231, stamped with a Nepal visa issued in Islamabad. On March 3, 2008, Mir flew from Karachi to Kathmandu on Pakistan International Airways flight 268 -- and promptly handed himself over to waiting Indian intelligence operatives who his family had made contact with the previous summer.

Even as India prepares to resume the dialogue on Jammu and Kashmir (J&K), stalled by the political crisis that swept Pakistan, J&K is readying for elections to its Legislative Assembly. By this winter, J&K should have a new government in place. Meanwhile, India and Pakistan will likely be fleshing out a five point peace formula hit at by their covert negotiators S.K. Lambah and Tariq Aziz, which includes the recognition of the Line of Control (LoC) as a de facto border, cooperative management of some agreed subjects, free trade and movement, and demilitarisation -- all contingent on an end to terrorism.

For the leadership of the HM, the numerically largest terror group in J&K, the prospect of an historic peace deal must appear just as the butcher's blade does to the chicken whose neck it is about to sever.

Deal or no deal, the HM and other Islamist terror groups won't be players in influencing the outcome of the electoral process in J&K -- for the first time since 1995. In 1996, when the state took its first steps toward the restoration of democracy, 61 political workers were killed in terror strikes. Another 57 died in 1997. In 2001, the year before the fateful elections that brought the Congress-People's Democratic Party (PDP) alliance to power, 76 political workers were killed. One hundred party workers were butchered in 2002.

Politicians were forced to cut deals with Islamist terror groups, making clear just where real power lay. Indeed, the killing of National Conference workers was a major reason for the party's defeat in 2002, and led it to soften its stand on terrorism thereafter.

But now, jihadi organisations just don't have the muscle left to enforce compliance. Earlier this year, the United Jihad Council (UJC) announced that it would not use force to obstruct the democratic process -- the customary transformation of necessity to virtue. Few politicians take that promise at face value. As in past elections, the path to democracy will more likely than not be punctuated by assassinations and bombings. But the fact is, the jihad is waning.

Mir isn't the only senior Hizb ul-Mujahideen commander to have given up the fight in recent months. Since late 2007, the HM's 'supreme commander' in J&K, Nasir Ahmed Bhat, has been living in a safehouse outside Srinagar, under the secret protection of the state government.

On the eve of the next Assembly Elections, the J&K government hopes to use Bhat -- better known as 'Ghazi Misbahuddin,’' the alias traditionally used by the HM's senior-most field commander -- to demonstrate its willingness to talk to terrorists who decide to abjure violence. HM's 'supreme commander', Mohammad Yusuf Shah aka Syed Salahuddin has refused to meet this condition, but others in the organisation seem increasingly willing to take whatever deals are on offer.

Unnoticed, over a dozen mid-ranking commanders at the Hizb's camps in Pakistan have returned to India since January 2008. Most experts believe the flow home from HM camps would have been even higher if India had not come down hard on cross-LoC surrenders, after Intelligence reports warned that some rehabilitated terrorists had reactivated their connections with jihadi groups. All the major political parties in Jammu and Kashmir, though, are lobbying for a proper and secure rehabilitation policy to be put in place -- and one most likely will be, once a new government takes office.

Even as things are, the HM is desperately short on both leadership and cadre. Kulgam-born Riyaz Ahmad Bhat was scheduled to replace Nasir Ahmed Bhat, but flatly refused to run the risk. His parents, family sources said, have now travelled to Pakistan to secure their son's marriage -- and thus ensure he stays on at a HM camp rather than risking death at home. Muzaffar Ahmed Dar, a long-standing HM operative from Magam, with an undistinguished record of service in the organisation, was obliged to take charge in his stead. He has little, however, to take charge of.

Across the north Kashmir zone, the HM has just three commanders of significance: Mohammad Shafi Shah, a Papchan-Bandipora resident who uses the code-name 'Dawood'; his old-friend from the adjoining village of Chuntimulla, Ali Mohammad Lone; and Tanvir Ahmad, from Baramulla's Bagh-e-Islam neighbourhood. Together, these three HM formation leaders are believed to have less than three dozen men under their command.

In its one-time south Kashmir strongholds, the decimation of the HM has been even more marked. Just one commander of consequence has survived the thoroughgoing destruction of the organisation by the J&K Police -- Pervez Ahmad Dar, who uses the code-name 'Pervez Musharraf'. Panzgam resident Raees Dar, known to his associates as 'Kachroo' or "brown-hair", was arrested by the J&K Police on March 31, 2008; the organisation's all-powerful financial chief Farooq Dar, code-named Hanif Khan, was shot dead near Tral on February 10, 2008.

Since the arrest of Tajamul Islam, the Karachi-bred son of one of HM chief Mohammad Yusuf Shah's most trusted aides, the central division has had no leadership at all. On March 19, 2008, in a desperate attempt to demonstrate its continuing presence, the HM carried out a bombing at Srinagar's Jehangir Chowk. Cadre and resources for the operation had to be mobilised by Tanvir Ahmed's north Kashmir cell -- leading to a series of errors which led to its rapid unravelling by Police investigators.

Indeed, the ease with which attempted HM terror operations have been stopped suggests a high degree of penetration by the J&K Police and Intelligence Bureau -- another sign of the demoralisation in the rebel ranks. At least one ranking commander, south Kashmir -- based Javed 'Seepan' Sheikh, is rumoured to be a Police asset, which has led to mistrust and factionalism within the HM's already-fractured ranks.

Does all this mean that the waning of the jihad is an inexorable process? Not just yet: Pakistan's covert services, and the Islamist terror groups it helped create, aren't quite ready to give up the fight.

Addressing a March 1, 2008, Lashkar-e-Toiba (LeT) gathering in Muzaffarabad by telephone, its Lahore-based amir Hafiz Mohammad Saeed announced that restrictions placed on his operations in Pakistan-administered J&K would soon be lifted. While the jihad in J&K had suffered because of the fallout of the United states' war in Afghanistan, he said, things were changing. Saeed also announced the Lashkar would soon be setting up a new magazine devoted to the jihad in J&K.

On ground, there are signs that the LeT war-machine is preparing itself for renewed battle. In March 2008, the Lashkar began installing new state-of-the-art wireless communications equipment at its control station in Kel, just across the LoC from the critical infiltration routes across the Lolab mountains. A training centre just outside of Balakote, in Pakistan-administered J&K's Muzaffarabad District, has been revived under the command of one of the Lashkar's top irregular warfare instructors, Wagah resident Sagir Ahmed. And, sources indicate, since January 2008, a former Pakistan Army officer known to his subordinates as 'Captain Salim' has been training cadre for combat in J&K at a new camp in Lala Moosa, near Gujranwala.

Perhaps most important of all, the ISI has resumed direct funding for the HM, which was shut off under international pressure in 2006. Married cadre at the HM camps in Pakistan-administered J&K are now receiving PKR 10,000 a month, up from PKR 5,200; single men receive PKR 8,000 against the PKR 4,200 on offer before ISI funding was cut off.

All of this, of course, might prove to be too little--and too late. Despite energetic infiltration efforts last summer, violence levels have continued to drop. 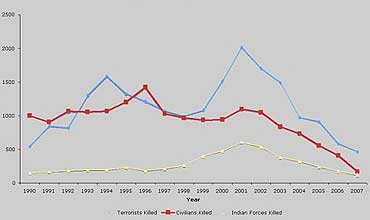 Jihadi organisations in J&K have, however, demonstrated that they can put up a fight in the one area where they are still present in some strength -- the dense forests above Baramulla, where the major infiltration routes across the LoC converge. Bucking the dramatic state-wide fall in violence, Baramulla saw an escalation in 2007, with 22 Indian soldiers and Policemen killed in combat against 16 in 2006, while 103 terrorists were killed, up from 95. Should high levels of infiltration take place this spring and summer, jihadi groups could well try to replicate this model elsewhere.

Whether this outcome is realised depends on two factors: the competence of India's pre-election counter-terrorism operations, and the extent to which Pakistan is willing to go to revive the dying jihad.

It is the second of these that could prove most important. While politicians like People's Party of Pakistan chief Asif Ali Zardari have laid out a brave agenda for peacemaking with India, the power to shape strategic policy lies not with them, but with Pakistan's Army. General Ashfaq Pervez Kiani represents the Pakistan Army's institutional consensus -- a consensus that includes among its pillars the belief that sub-conventional warfare is an integral component of national security. In recent weeks, restrains imposed on anti-India jihadi groups like the Lashkar and the Jaish-e-Mohammad (JeM) have been loosened, in an evident effort to restore the Pakistan Army's legitimacy among the Islamists, who have so spectacularly turned on it in recent months. With its forces heavily committed to the west, though, it is unclear just how far Pakistan's military establishment can risk precipitating a potentially war-inducing crisis with India.

But this much is clear: the jihad in Jammu and Kashmir is clinging to the edge of the abyss by its fingernails. Whether it is any position to grab the rope Pakistan's military establishment has thrown it -- and if that rope is strong enough to take the load -- remains to be seen.