'We definitely have a stronger batting line-up than the Pakistanis. But to win you also need to take 20 wickets... and there I have some doubts as most of the bowlers are carrying injuries' 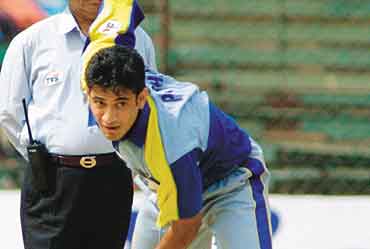 Expressing doubts over the ability of an injury-depleted Indian bowling attack to succeed in Pakistan, spin legend E.A.S. Prasanna said the visitors could win the Test series if the bowling performance could complement the team's strong batting line-up.

"We definitely have a stronger batting line-up than the Pakistanis. But to win you also need to take 20 wickets.. and there I have some doubts as most of the bowlers are carrying injuries," the offspinner, who formed a part of the revered Indian spin quartet in the 1960s and 1970s, said.

The Indians are hampered by injuries to their bowlers with three experienced seamers - Ajit Agarkar, Zaheer Khan and Ashish Nehra - yet to submit their fitness certificates to the board, off-spinner Harbhajan Singh ruled out with a finger injury and veteran leg-spinner Anil Kumble still being a doubtful starter.

"In the fast bowling arena, India will now have to depend a lot on youngsters Irfan Pathan and Laxmipathy Balaji. But I think we are worse of in spin, where Anil (Kumble) is still doubtful and the selectors have to find a replacement for Harbhajan," the tweaker, who has now settled in Kolkata, said.

"I don't know, to what extent the young and inexperienced spinners can fill up the slot made vacant by Harbhajan," said Prasanna, who picked up a rich haul of 189 wickets in 49 Tests at an average of 30.38.

Prasanna also felt that wickets in Pakistan were generally placid, and the bowlers needed to put in that "extra something" to succeed.

"Our bowlers will have to take wickets regularly, and not allow partnerships to blossom on these docile tracks," he said.

However, Prasanna praised India's batting talent, saying "Our batting has tremendous depth. One to one, our willowers are far superior to the Pakistanis. The strong showing in Australia has increased the morale of the players, particularly that of the batsmen."

The offie said the series would be highly competitive, but disagreed with the view that the matches would boil down to battles between the Indian batting and Pakistan bowling.

"I don't think so. Because the Pakistani pace battery now lacks the firepower of the likes of Wasim Akram and Waqar Younis," he said.

Prasanna, a key member of the Bishan Singh Bedi-led team that visited Pakistan in 1978 in another revival tour which came after an 18 year stoppage in bilateral cricketing relations between the two neighbours, felt that "diplomatic pressures" had weighed down the Indians who lost the three-Test series 0-2.

"Before leaving for Pakistan we were all briefed about the importance of the tour in terms of improving bilateral relations. We were brainwashed to such an extent that we never had a feeling that it was a normal cricketing tour," Prasanna said.

As told to Sirshendu Panth