The latest buzz, or, news, if you will, on the news shows and all the rows... 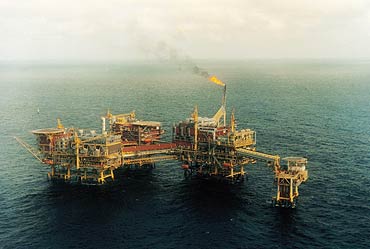 This is arguably one of the best news for the country's hydrocarbon sector. UK-based Cairn Energy has claimed what could be a significant gas find in the Bay of Bengal. According to sources, the discovery is said to have reserves of up to 4 trillion cubic feet of gas, or 667 million barrels of oil equivalent. Sources in India claim that Cairn plans to sell 1 million cubic feet of gas to a Southern Indian power producer.

The potential of the new find will come as a relief to the Indian Government, ostensibly because of neighbouring Bangladesh's refusal to sell gas from its reserves and the proposed Iran pipeline (via Pakistan) still in limbo.The Petroleum Minister, Ram Naik, is due to make an announcement later this week. Is this a lesson for the crisis-ridden ONGC which continues to claim the eastern sector had little gas and oil and continues to direct all its efforts to the Bombay High and other Southern offshore fields?

What is Sanjay Bhatnagar upto? Well, the buzz is that the former Enron India CEO has formed his new venture fund company, the Thot Capital Group, and is currently scouting for a host of projects, both in India and the U.S. (his new home being in New York). And of the ventures, two are extremely interesting. One is a partnership with the legendary Quincey Jones (whom he had met during the last World Economic Forum meeting in Davos) to set up music studios in India and bring classy Broadway theatres to Mumbai, Bangalore and Delhi.

The second one revolves around picking interesting gameshows in collaboration with CBS of the United States. Expectedly, interested people in India (read Delhi) have started queuing up his permanent suit in The Oberoi. Watch this space for more details.

After Credit Suisse First Boston's (CSFB) infamous involvement in the Ketan Parekh-triggered scam, is it the turn of J.P. Morgan to face flak from the Government? It seems so, especially after J.P. Morgan completed its financial evaluation of one of the public sector undertakings on the Government's disinvestment list. Last week, the India head of the investment consultant company, R. Srinivasan, wrote to Disinvestment Secretary, Pradip Baijal, offering explanations for its financial evaluation of NALCO which had upset the Department of Disinvestment (DoD). But Baijal, it seems, is still unhappy.

Is the cash-strapped Zee Network currently on a patch-up job with the Government (read PMO)? Otherwise, why is it that the group Chairman, Subhas Chandra Goyal, has had as many as seven meetings during the last two months with none other than Prime Minister, Atal Behari Vajpayee, and his Principal Security Advisor, Brajesh Mishra? There's more. In a quiet announcement last week, the channel's programming staff were told to tone down the anti-PM stance of the much-hyped Pradhan Mantri.

Besides, the channel is not making public its proposed investments in Tehelka, the news and current affairs dotcom company which shot into prominence following its expose of payoff scandals in defence deals. But who helped Goel smoke the peace pipe?

Insiders claim the Zee Chairman was told by his confidants that it makes no sense to play a dual role: That of attending the RSS annual show and criticising the Government threadbare on the channel. Hence the sudden change in attitude.

This may sound simply bizzare but it's true. During the due diligence of Air-India, one issue continued to trouble the bidders: Who owns the works of classy painters which adorn the walls of the company's offices across the country and abroad? Air-India estimates the paintings - which include the works of M.F. Hussain,

Bikash Bhattacharya, R. Ramachandran, Kishen Khanna, Manjit Bawa, Anjolie Ela Menon and even the late N. Roerich - are worth Rs 150 crores and that it should be included in the final cost of the company. But the bidders are not ready to buy the theory. Last heard, both the bidders (the Tata-SIA and the Hinduja brothers) had sought professional help to ascertain the cost.

If politicians can hog limelight for the Great Mansarovar Yatra, can the corporate captains be left behind? Led by liquor baron Vijay Mallaya, a team - which includes Tina and Anil Ambani and Parmeshwar and Adi Godrej - has started on the great, 150-km trek to the lake in China. Highly placed sources in United Breweries claim Mallaya - long known for his penchant for wine, horses, planes and cars - is contemplating one such trip every year to all popular religious centres across the globe, thanks to his association with Sr Sri Ravi Shankar of the Art of Living fame.

News about Dr Prannoy Roy's NDTV and News Television India refuses to die. The absolutely latest is the one wherein News Television asked NDTV to switch off three programmes - Good Morning India, Sawal and Nationwide - and sought replacements. But despite News Television's official claim that it will be NDTV which will fill in the vacant slots with new programmes, the news is that as many as four new production houses have been asked to work on new programmes. And mind you, these will not be for Star TV but Star News, an area which - till recently - was NDTV's sole domain.

Does that mean it's almost a losing battle for NDTV even as News Television checks out other content providers in the market? Could be yes, though the only consolation is that (under the last agreement signed between the two) Dr Roy's team has time till March, 2003.

When Hindustan Lever Limited (HLL) completes a takeover, you can be sure of job cuts. After all, HLL always wants a lean and mean work machine. The latest job cuts are happening at Modern Foods, the first state-owned company where the Government completed its disinvestment process. Insiders claim the HLL top brass recently completed the VRS process for Modern Foods and that all the unions - till recently clamouring about job losses and shutdown - have signed on the dotted line without a murmur. Fading signs of  the once redoubtable Lal Salaam power?