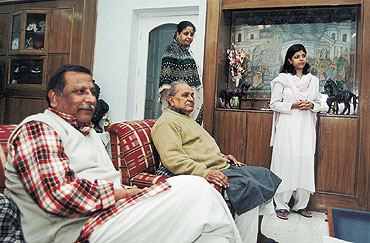 Fifty-plus Man Mohan Jha, along with his wife Pratima, is counting his days for the month of July when he will be off to the US of America -- bag and baggage -- and be able to live life "more secure, serene and sassy".

Completely fed up with the system as well as the law and order problems of the state, Jha, who still has eight years of his service to retire as a Resident Manager of a private company -- Usha Martin based in Jharkahnd --  is waiting for the passport of his wife so that he could fly off to New York where his younger brother, Anand Mohan, is living since 1986 -- now a US citizen working with Weisner Nic, USA as Vice President, Finance.

"It's only the sense of insecurity, poor law and order problem of the state and peaceful, stylish life out there in United States which have compelled me to quit my country, otherwise who will like to go to alien land at this age of life and settle there? I'm basically the son of soil who has great feelings for his land but the situation here is so frightening that it compels me to leave the country", says Jha while reading the banner headline of the day in a local daily about 7 people massacred in Patna.

In fact, says Jha, who has had a true professional career in his life, the whole system of the state as well as the country has become rotten: "Everything in this country is being done on 'connections' and 'power'; for a common man like me there is no scope left for growth in life or career".

Jha's son Ratan Mohan is already in the US, studying at Arizona Univeristy. His only daughter Bharti, doing her electrical engineering in a college in Nasik, Maharastra too has applied for her passport. Destination: America. "I want to go there for better career prospects, quality life and also for greener pastures which we don't get in this country. Forget about this lawless state", Bharti says with a shy smile and twinkle of hope in her eyes.

Man Mohan Jha thinks that "adjustment" in America would not be a problem as many of his family members are now settled there. Apart from his younger brother and his family,  several of his distant relatives and friends are also there to give him company. His octogenarian father Bhagwan Dutt Jha too hopes to go to America, before finally departing for his heavenly abode. "Lets see what happens".

Ten to fifteen passports are issued per month from the Passport office , Patna for the US of A alone. "Every year in Bihar about 45000 -50,000 passports are being issued which has increased several times up since the last five years. So one can well imagine the number of people leaving this country from this state alone every year," informs the Passport Officer, Patna, B.C. Guha.

However, out of the total about 35-45 per cent passports are issued for gulf countries. "And rest for the America, Canada and other European countries", says Anil Kumar of Siddharta Travels in Patna, who runs his travel agency from the same building of the Patna Passport office. "It's the IT job hunks who are leaving the country for better life and career prospects and later on they call their family there", he adds.

Sahilesh Kumar, another 'travel consultant/agent' in Patna has the last word: " Though from the last one year there has been some decline in passport applicants but before that people had been seeking passports in hordes as if there was a competition for leaving the country. It's been very much like the second quit India movement going on in the country."