The day clearly belonged to the Turbanator. A top-score of 37 in India's modest 203, and then a career-best 5-31 to script a dramatic 39-run victory over England. 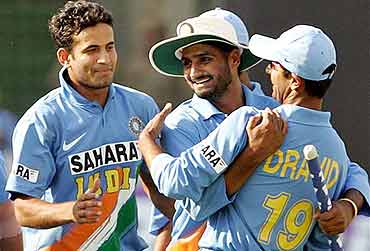 After top-scoring with 37 in India's modest total of 203, the 'Turbanator' swung the game in India's favour with a career-best haul of 5-31 to give the hosts a 1-0 lead in the seven-match series.

Cruising at 117 for 3, England were well on course of scoring a one-sided win when Harbhajan turned the match around with a stunning spell of 6-2-9-4.

The off-spinner was well supported by his Punjab teammate Yuvraj Singh who chipped in with two wickets as England were bowled out for 164 in 38.1 overs at the Ferozeshah Kotla.

The capacity crowd burst into celebrations as Irfan Pathan (3-21) had Liam Plunkett caught behind to mark the home team's victory.

Kevin Pietersen slammed 46 off 49 balls and captain Andrew Flintoff made 41 off 37 with four fours and two sixes in the only display of defiance by the visitors.

Put in to bat, India never recovered from the early jolts and even failed to play out their full quota of 50 overs on what appeared to be a good batting track.

Harbhajan played a valuable innings down the order to top score with 37 while captain Rahul Dravid (34) provided some thrust at the top.

Pathan (28) and Suresh Raina (24) featured in a 58-run sixth wicket partnership that lifted India from 80 for five after 20 overs. Later, Harbhajan and Dhoni added 55 runs for the eighth wicket.

India were immediately on the back foot after Dravid lost the toss. The Kotla track, despite its uncharacteristic pace and bounce, was worth 300 runs in the afternoon. But making as many while batting first was always going to be a tough ask, given the favourable conditions for swing in the first hour.

Kabir Ali, returning to the team after a gap of three years and playing only because of an injury to Sajid Mahmood, picked four for 45.

Flintoff led once again from the front with an immaculate bowling performance.

Although he did not take any wicket, his accurate line and length kept the batsmen on their toes. His first spell of 5-0-14-0 reined in the Indians who looked liked getting away after Sehwag's dismissal.

Sehwag showed no signs of the back injury he suffered in the Mumbai Test as he executed a trademark slash off James Anderson over point.

But the capacity crowd's joy was shortlived as the Delhi batsman found himself late on a pull shot off the same bowler for a simple catch to mid-wicket.

Gautam Gambhir exhibited some aggression as he hooked Ali for a six over deep backward square-leg and then pulled him to the mid-wicket fence next ball.

Again, a blossoming innings was nipped in the bud as the left hander snicked the following delivery to wicketkeeper Geraint Jones.

Yuvraj, guilty of playing a shot before assessing the pace and bounce of the wicket, played on in Ali's next over.

Mohammad Kaif was caught off guard by an ambitious call for a single from his captain and was agonisingly run out as his bat made it past the crease but was found to be up in the air by the third eye.

Dravid was in imperious form but could not make much out of the reprieve on nought, dropped by Owais Shah at slip while trying to cut Ali.

The skipper made his best to counter attack, cracking boundaries at will while wickets kept falling at the other end.

Young guns Pathan and Raina then lifted the innings with some fearless strokemaking. If the former was splendid in driving on the frontfoot, the latter was bold in cutting the short-pitched stuff over gully and point.

Their flourishing partnership came to an end when Raina mistimed an on drive off left arm spinner Ian Blackwell to Paul Collingwood at mid-on.

A hush fell on the ground when Pathan followed him back to the pavilion eight runs later, top edging Anderson to mid off.

Mahendra Dhoni's arrival to crease still brought a roar from the crowd but the pyrotechnics came from Harbhajan.

From the moment he thumped Anderson straight down the ground, Harbhajan was confidence personified. The Punjab player kept rotating the strike with a cool head before shifting gears to hoist Plunkett over long on for a six and a 'Nataraj' pull shot to the square leg boundary two balls later.

Dhoni joined the party with two fours off Plunkett that brought the 200 up. But the swashbuckler fell in the same over, caught at point while trying a cut.

The innings folded up instantly, Harbhajan holing out to Flintoff at cover and Sreesanth spooning a simple catch at mid off.

Pathan gave a roaring start to India, removing Andrew Strauss and Owais Shah in the first over of the innings.

But Pietersen's intimidating batting helped England shrug off the early dismissals. He repeatedly stepped out to the left arm seamers, Pathan and R P Singh, to pierce the leg side field.

A smack through short mid-wicket and mid-on followed by a loft over mid-wicket saw Pathan off the attack.

The 25-year old South Africa-born then turned his attention to R P Singh, first driving him off the pads up over square-leg, and then, when the youngster pitched it a bit short, rocked back to smash it through cover.

Flintoff, who joined Pietersen at the fall of Matt Prior, was not the one to be left behind. A stunning six over long off followed by another over mid-wicket off Sreesanth brought up the hundred.

A change of bowling then did the trick.

Pietersen, attempting to hoist Yuvraj, mistimed it and was caught at the deep mid-wicket boundary, ending a breathtaking 60-run partnership off only 48 balls.

Six balls later, without any addition to the score, Flintoff fell leg before to Harbhajan.

The off-spinner struck again in his next over, Jones misreading the length and bowled by an innocuous delivery.

The pitch had considerably eased out in the afternoon, yet there was the occasional delivery that came awkwardly off the deck. It was this help from the track that Harbhajan exploited.

Ian Blackwell opted to meet fire with fire and swept Harbhajan over square-leg. But he played the cross batted shot once too many to end up with a top edge, Gambhir taking a well judged skier against the sun in the deep.