It is foolhardy to push on with your mistakes when accepting them perhaps is the way forward. After all, to err is human and it takes a brave man to accept it. 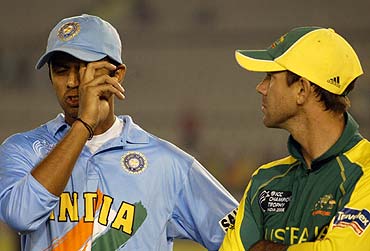 India faced an opponent in Mohali who, even in the best of days, are not easy to overcome. The odds become longer if you are out of sorts. Then nothing is much of help, not the best pitch of the competition nor a few sparks of revival visible.

Hence, it wouldn't serve much purpose to pick on India's follies which, as we all know, look graver in moments of defeat. One could debate endlessly if it was the better option to bat first in Mohali or if the eleven was right or whether Mahendra Singh Dhoni, and not Dinesh Mongia, should have been at number three.

Many would have an issue with our scoring rate; some would insist the outrageous option of throwing spinners at Ricky Ponting in the power play was the way to go. Excuse me if I am missing out on a few of your very own favourite notions. All this would serve little.

All said and done, India for me did most things right. The decision to bat first was the right one as was the composition of the team. Only one thought Dhoni ahead of Mohammad Kaif was the better option especially with Rahul Dravid playing as well as he was. That could have made a difference to the end score which I thought was competitive when you consider it being a knockout contest.

The disappointing aspect though was the body language in the field once a couple of boundaries were hit. India needed to be more at Australia early on thinking wickets at all times.

The bowling with the new ball was ordinary and missed the zing. This allowed Australia to get away. Still, I liked what I saw of Sreesanth and I do believe he should never have been out of the team in the first place. He has a wicket- taking ability and aggression which can be groomed and enhanced. His second spell to Ponting and Damien Martyn was the most positive thing from India's point of view in the entire day.

Glenn McGrath was a revelation for Australia and Shane Watson a big asset. The Pigeon's ability to up the ante on the big day is what makes him special. His first spell set the tone for things to follow in spite of Virender Sehwag's belligerence.

I am now worried about what lies ahead. Does India continue with its experiments or now fall back upon its proven if ageing warriors? Is it time to return to the seniors and some experience or should the investment in youth continue given they need their own space and time to grow?

How do you handle the impatience of the nation and media given the proximity of the World Cup with your own beliefs and theory which you have held on to so dearly? These are some central issues to India's woes.

The judgment against VVS Laxman and Anil Kumble in the one-dayers has only been about their fielding. Nobody doubts their quality in their respective fields. They are still central to India's Test plans.

I feel India would have to be a little spacious about this argument as it needs a temporary fix. Both its batting and bowling could do with a little bit of class. Both are enormously respected by opponents all around the world. Youngsters also tend to get inspired by the presence of proven talents.

I also feel Wasim Jaffer and Gautam Gambhir are the men who are needed since sorting out a good top order is more important when you go on a tour than packing the lower middle order.

In moments such as these, the authority of the men in command is usually eroded. Dravid would survive such a pitfall because he is unquestionably a champion, one of India's truly greats. Greg Chappell too is old enough to understand if a corrective is required in his approach.

It is foolhardy to push on with your mistakes when accepting them perhaps is the way forward. After all, to err is human and it takes a brave man to accept it.